Trump dropped a massive coronavirus lie on the American public: ‘Mortality rate is one of the lowest in the world’

There's no question that President Donald Trump is a serial, inveterate, unrepentent liar. But now his lies are costing lives, many, many lives – so many lives some are starting to accuse him of genocide, and others are asking, "how do we not label Trump a killer of American citizens by negligence, ignorance and incompetence?"

Just before midnight on Thursday President Trump dropped a huge lie on the American public, a lie designed to make those who don't know and won't bother to check, feel "safer," and go out into their cities and towns thinking the coronavirus pandemic isn't that bad, or that deadly.

Some might call his actions "depraved indifference," but whatever you'd like to call it, there's no getting around the fact that Trump is playing Russian roulette with Americans' lives. He's pointing the gun, pulling the trigger, and doesn't care if there's a bullet in the chamber or not.

"Mortality rate is one of the lowest in the World."

The United States ranks number nine in coronavirus mortality – where number one is the worst in the world. Out of 215 countries and territories, we're number nine. There are 206 nations where statistically you would have a better chance of not dying from coronavirus if you were infected.

The truth: In the United States, the coronavirus mortality rate is one of the highest in the world.

Worldometers offers one of the best interactive, continuously updsted charts for tracking the coronavirus pandemic.

Here's a screenshot, taken just before midnight on Thursday, sorted by per capita coronavirus deaths, or deaths from coronavirus for each one million people in the population. 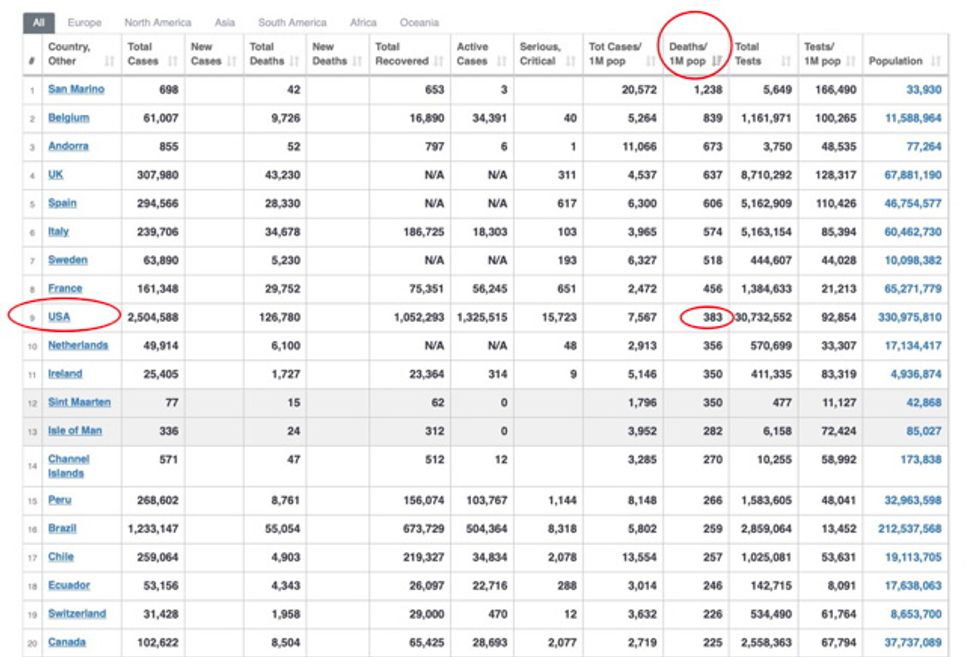 In the United States the number is 383, as of the time this was taken.

For those who prefer Johns Hopkins' statistics, the U.S. also ranks ninth in mortality rate, where number one is the worst. Johns Hopkins also offers a "case mortality" rate, meaning of those diagnosed with coronavirus, how many die. There the U.S. ranks 34th. Again, number one is the worst, and there are 215 countries. No matter how you look at the numbers, there is no way the mortality rate in the U.S. is "one of the lowest in the World."

It is one of the highest.

Trump is lying to you, and people are dying.