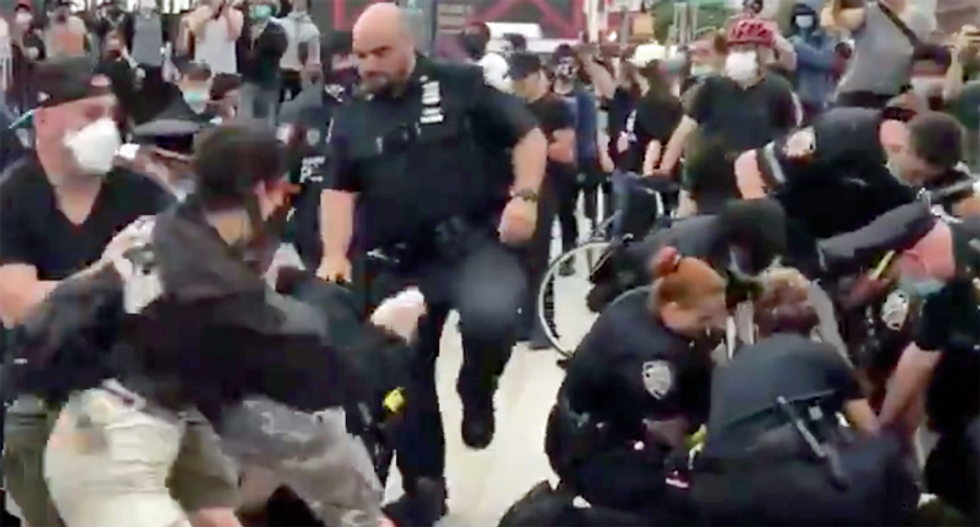 "This kind of documentation serves as a counter-narrative to repeated denials of responsibility from the police, who are routinely claiming protesters were the ones to grow violent first."

President Donald Trump on Monday applauded U.S. police officers as "great, great people" who "have been letting us live in peace," praise that is starkly at odds with the direct experience of protesters and journalists on the ground who in recent days have witnessed—and, in many cases, captured on video—cops beating and tear-gassing peaceful demonstrators in the streets demanding justice for the killing of George Floyd.

"They've done a fantastic job," Trump, who has repeatedly encouraged police to use excessive force, said during a roundtable with law enforcement officials at the White House. "There won't be defunding. There won't be dismantling of our police. And there's not going to be any disbanding of our police. Our police have been letting us live in peace."

Trump's description of police officers as peacekeepers comes as activists are in the process of compiling an online spreadsheet of videos and images documenting law enforcement brutality against demonstrators across the nation, violence that has galvanized efforts to fundamentally change policing in the U.S.—including by disbanding entire police departments.

Attorney T. Greg Doucette and mathematician Jason Miller teamed up to create the Google spreadsheet—which, as of this writing, has nearly 600 entries—after efforts to compile the footage of police violence on Twitter proved difficult, given the sheer volume of videos that have circulated across social media during the nationwide uprising over Floyd's killing.

The Freedom of the Press Foundation has also documented nearly 300 incidents of police violence against members of the press covering the demonstrations.

"This kind of documentation serves as a counter-narrative to repeated denials of responsibility from the police, who are routinely claiming protesters were the ones to grow violent first, or that a man who they pushed to the ground, cracking his head open, simply tripped," wrote VICE's Katie Way. "It also combats media coverage that downplays police violence or even goes to the lengths of using passive voice to obfuscate what the police have done."

On Monday, the Washington Post published a video timeline of the violent police crackdown on peaceful demonstrators in Lafayette Square on June 1, an assault that cleared the way for Trump's photo-op at St. John's Episcopal Church.

Asked about police conduct during a briefing on Monday, White House press secretary Kayleigh McEnany said the administration has "no regrets" and is "not sorry" for the attack on demonstrators.