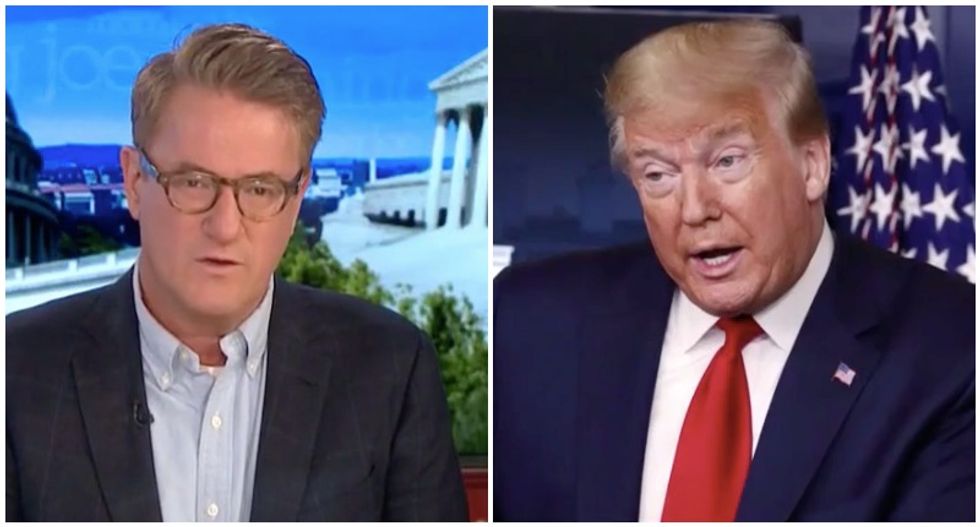 President Donald Trump has often used his relationship with the National Enquirer tabloid as a way to intimidate his foes by threatening to publish damaging information on them.

However, The Daily Beast reports that there was one story that was actually a bridge too far for the Trump-loving tabloid: Murder conspiracy theories involving MSNBC host Joe Scarborough.

According to the publication, Trump first began musing about pushing the bogus conspiracy theory three years ago, when the "Morning Joe" co-host's coverage of the president turned more critical.

"It was right around this time that Trump started asking White House aides if he should tweet about 'the dead girl' -- as one of the people recalled the president phrasing it -- to get back at his friend-turned-foe 'Psycho Joe,'" the publication writes. "Multiple advisers cautioned against doing so, arguing it was, at the very least, not worth it."

While Trump mostly resisted tweeting about the 2001 death of former Scarborough congressional staffer Lori Klausutis, he did order son-in-law Jared Kushner to push the Enquirer to start looking into the story.

The tabloid did agree to look into it but it never actually published anything because, according to The Daily Beast, "reporters were ultimately unsuccessful in finding even threadbare proof to run a story."

Given that the same publication in 2016 published wildly outlandish stories linking Sen. Ted Cruz's (R-TX) father to the assassination of former President John Kennedy, writes The Daily Beast, it seems that the conspiracy theory about Scarborough is the single most baseless that Trump has ever peddled.