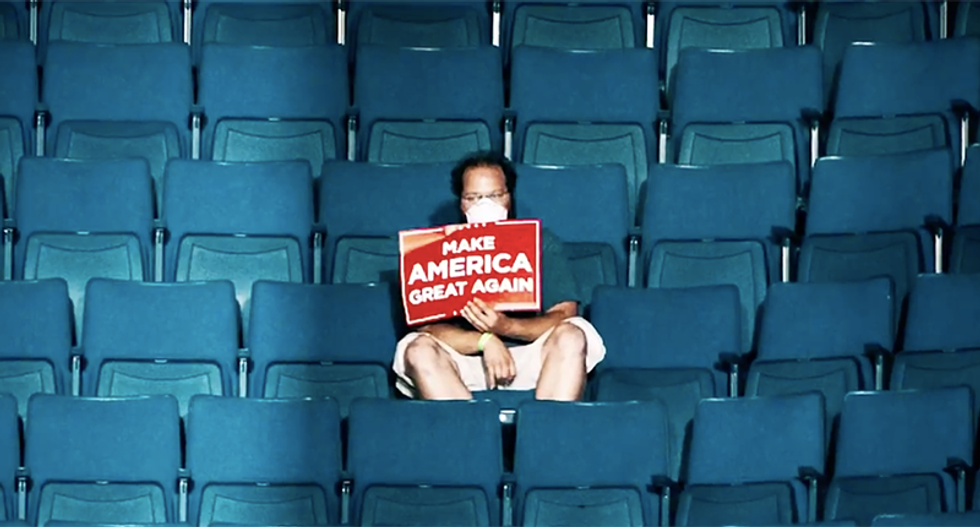 Axios reporter Jonathan Swan told MSNBC during a panel discussion Sunday that many aides to President Donald Trump believe the real reason people didn't show up to his Tulsa rally is that they tend to be mostly older if not elderly and aren't willing to risk getting the coronavirus.

Oklahoma had their worst day of COVID-19 infections in the days leading up to the rally. In just two days, there were over 800 cases of COVID-19 that erupted in Oklahoma. The day after the Trump rally, Sunday, it was announced that Oklahoma set a new record with 478 reported infections.

"I interviewed the president on Friday," said Swan. "I was with him in the Oval Office on Friday. He was very excited about this rally. He put extreme importance on this rally as his comeback rally, and they had set sky-high expectations. That was the major problem. They had built this not as a rally but a festival with an indoor stage and outdoor stage the president was supposed to speak at. They constructed this outdoor stage with musical acts and tens of thousands of people."

Obviously, it was a scene out of "Waiting for Guffman," where what was expected never manifested.

"Of course, when you have an empty outdoor area that you have to shut down and then you have an indoor area with 6,000 people with the capacity of 19,000, that by any measure, is a fiasco," Swan continued. "So I expect there will be recriminations. I don't know what they look like, but as for where they go next, I'm told they are going to make some changes to the way they do these. I don't know what they look like, but I expect you're probably going to see more outdoor events and more of an acknowledgment, I think from the conversations I had today, people on Trump's team recognize they don't really talk about the trolling, the left-wing trolling. I think a number of them really recognize that some of Trump's supporters, he's got a lot of supporters in the elderly age group, which is vulnerable to the coronavirus that they simply were concerned and didn't show up and I have heard that acknowledgment within Trump's advisors."

On Fox News, Texas Lt. Gov. Dan Patrick said that the higher at-risk groups like the elderly would be willing to die to help the economy reopen.

"Those of us who are 70 plus, we'll take care of ourselves. But don't sacrifice the country," Patrick told Tucker Carlson in March. "No one reached out to me and said, 'As a senior citizen, are you willing to take a chance on your survival in exchange for keeping the America that America loves for its children and grandchildren?' And if that is the exchange, I'm all in."

Patrick seemed to be one of the few willing to make the sacrifice as many people are still sheltering in place. Similarly, it is clear that those older supporters Swan mentioned were also unwilling to risk their health and lives to pad Trump's numbers in Tulsa.

See the full take below: