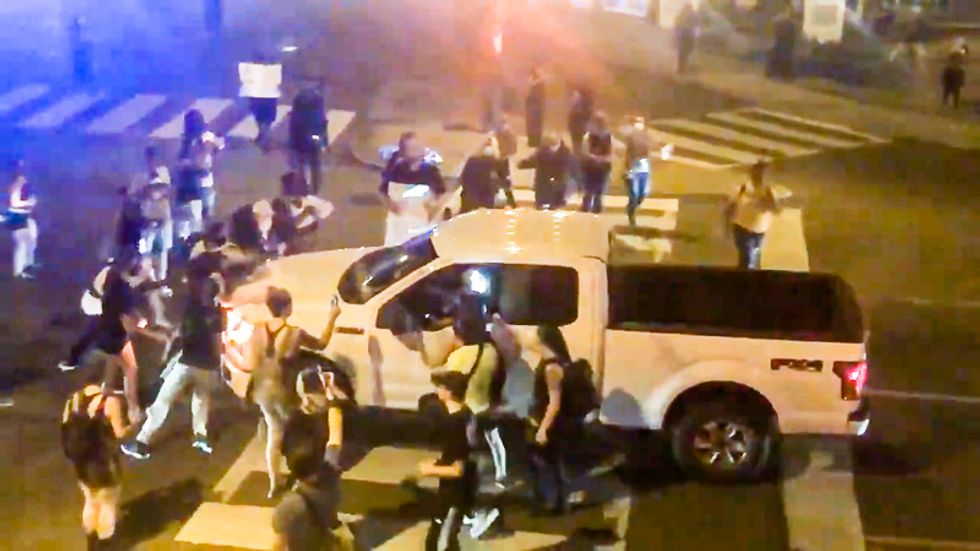 Imagine the reaction if during the recent far-right reopen rallies supported by Trump that backers of Joe Biden attacked and killed protesters. Not only would right-wing media demand Biden’s execution, Trump’s hatchet man at the Department of Justice, William Barr, would likely have indicted Biden as an accessory to murder.

While that scenario is far-fetched, the reverse is not. Since the police killing of George Floyd sparked unprecedented protests against systematic racism, at least four Trump supporters, including some involved in his 2016 campaign, have attacked Black Lives Matter protesters with weapons, leading to at least one death.

Disturbingly, perpetrators have been released or given light charges despite severely wounding and killing protesters. The real number of attacks by Trump supporters may be substantially higher as there have been hundreds of attacks, terrorist plots, and threats of violence by far-right forces against anti-racist protesters. Trump has encouraged the violence as well, fitting with his role as the stochastic-terrorist-in-chief for the last four years. These attacks are unlikely to be the last by Trump supporters against those protesting for racial justice.

On June 15, Steven Ray Baca, shot and critically wounded Scott Williams in Albuquerque, New Mexico. Protesters were attempting to remove a statue of Juan de Oñate, a 16th-century Spanish conquistador notorious for massacring some 1,800 Acoma Native Americans, and amputating and enslaving survivors. Videos show Baca at the statue assaulting three people unprovoked. Baca can also be seen with a can in his hand that protesters claimed was mace he used on them. After throwing a woman to the ground and apparently injuring her, the crowd forces out Baca and he draws a gun. As Baca leaves another fight ensues and he shoots Williams.

Baca is a Trump supporter as well and figure in far-right politics. He was an alternate delegate from New Mexico to the 2016 Republican National Convention. Sporting a MAGA hat, Baca attended a Trump rally in Albuquerque in September 2019, writing it was an “Awesomene time and a great rally!!!” In January, Baca joined the board of the Albuquerque Tea Party, which described him as a “hard-core conservative.” He ran for city council last year on a Trumpian platform. Baca said he feared the city was becoming a “third world country,” wanted to criminalize the homeless, give the police department “its teeth back,” and stop “spending money on illegal aliens.” Baca has been charged with aggravated battery with a deadly weapon. Within hours of the shooting, the statue of Juan de Oñate Baca allegedly was protecting was removed by the city, which is now “discussing the removal of other conquistadors.”

On June 5, a Texas man brandished a chainsaw at Black Lives Matter supporters in McAllen. Daniel Peña ranted, in apparent reference to the killing of George Floyd by police officer Derek Chauvin, “It was a f*cking n*gger and a bad cop.” He then assaulted protesters, ripped signs from their hands, and revved a chainsaw at them while yelling more racial slurs. Sources claim Peña, who has been slapped with six counts of deadly conduct and one charge for assault causing bodily injury, was a Trump supporter. No independent evidence has surfaced, but he did find a prominent supporter close to the president.

Trump campaign senior adviser Mercedes Schlapp amplified a tweet that lauded Pena’s racist assault that read in part, “I’d want this guy with me in a ride or die moment.” After being contacted by the media, Schlapp said, “I deeply apologize ... I would never knowingly promote the use of that word.” Schlapp did not apologize for seemingly endorsing a potential chainsaw massacre.

On June 1, FOX News reported a “Trump supporter,” Jacob Bracken, pulled a gun on BLM protesters in Upland, California. Standing with other pro-Trump counter-demonstrators, Bracken grabbed a long gun from a pickup truck and pointed it at protesters yelling, “All right everybody, back the f*ck up!” He was arrested on two felony counts of assault with a deadly weapon.

On May 31, Bogdan Vechirko, drove a tanker truck through protesters on a highway in Minneapolis. Video shows thousands fleeing in panic as Vechirko barrels an 18-wheeler toward them. Newscasters gasped that he went “pretty fast into that crowd.” He stops feet short of hitting a person. Another video shows him stopping twice and driving toward the crowd despite bikes and other objects being thrown beneath his truck and protesters clambering on the truck to stop him. Minnesota Department of Public Safety Commissioner John Harrington said, “It was one of the most dangerous things I’ve ever seen.” Protesters said, “It was a miracle no one was hurt.”

Vechirko is also a Trump donor. He’s given more than $300 to the “Trump Make America Great Again Committee” and the Republican National Committee since 2018. Vechirko, who has a criminal history that includes arrest for domestic assault, is among 19 documented vehicle attacks against protesters in three weeks. The attacks are reminiscent of the neo-Nazi who murdered anti-racist activist Heather Heyer with a car as she protested right-wing extremists in Charlottesville in 2017, and deadly vehicle attacks by religious extremists inspired by the Islamic State. Despite the grave danger he created, Vechirko was released without charges. The Democratic governor of Minnesota, Tim Walz, claims Vechirko appeared confused and was frustrated because the highway was closed. The state has not indicated what is confusing about intentionally driving an 18-wheeler at high speed towards thousands of people, or why being frustrated at traffic mitigates an assault that could have resulted in mass casualties. There is a petition with nearly 50,000 signatures demanding Vechirko be charged.

On May 30 in Omaha, bar owner Jake Gardner killed a 22-year-old African-American man, James Scurlock, during anti-racist protests in the Nebraska city. Gardner, reportedly a volunteer with the Trump campaign in 2016, allegedly “used racial slurs against Scurlock before firing his gun.” Douglas County Attorney Doug Klein took less than 48 hours to decide Gardner acted in self-defense and declined to press charges. Reports indicate Gardner provoked a confrontation and flashed a gun at protesters. Klein later petitioned for a special prosecutor who will lead a grand jury that will determine if charges will be filed against Gardner, whose two bars have since been evicted from the buildings they are in and shuttered.