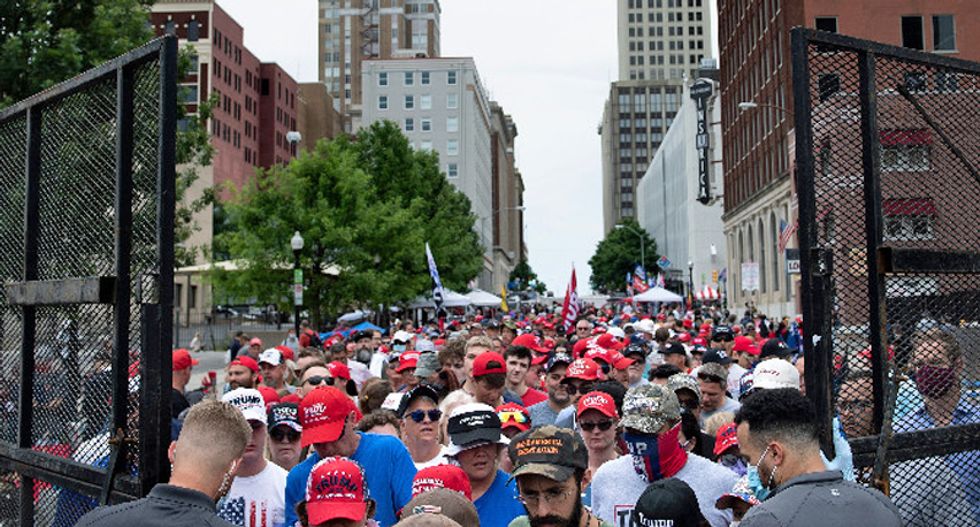 A defiant Donald Trump prepared for his first rally in months Saturday as supporters swatted away coronavirus concerns to hear the US president's campaign message, even as some on his advance team tested positive for COVID-19.

Thousands of supporters filed into the indoor arena where Trump aims to revive his election fortunes after several bruising weeks, and despite the rally emerging as a flashpoint in the pandemic era.

Streets outside the BOK Arena were crowded with Trump supporters, many in red "Make America Great Again" hats or T-shirts, but very few wore masks and there was little social distancing, even though coronavirus cases have recently been skyrocketing in Oklahoma.

The president has downplayed the risk that the evening rally -- with thousands of shouting, cheering attendees -- might trigger a coronavirus outbreak.

The Tulsa crowds "are unbelievable. They haven't seen anything like it," Trump told reporters as he left the White House en route to his 7:00 pm (2300 GMT) rally.

But the narrative of a trouble-free campaign event was punctured Saturday when the campaign announced that six members of its Tulsa advance team tested positive for coronavirus.

"Quarantine procedures were immediately implemented," campaign communications director Tim Murtaugh said in a statement. "No COVID-positive staffers or anyone in immediate contact will be at today's rally."

The stakes Saturday could not be higher -- both for the health of the 19,000 people spending hours at the arena and Trump's political fortunes five months before an election in which he trails in the polls.

"Today we're here to show we support President Trump and that we, the people, we'll win the 2020 election, no matter what the fake news media and other liberal, leftist, mind-controlling big firms are saying," said Brad, who declined to provide his last name.

The rally has been controversial not just because of the virus risk. Originally it was scheduled for Friday -- the Juneteenth commemoration of the end of slavery in the US -- in a city known for one of the deadliest massacres of black people in American history.

The crowd filling the Tulsa arena was overwhelmingly white.

This will be the first of Trump's signature rallies since March 2, when the country went into pandemic lockdown.

The virus has since killed nearly 120,000 Americans and hugely disrupted a once-booming economy, which had been Trump's strongest re-election selling point.

For Trump and his supporters, Tulsa is now the place to show their strength.

"This is a super important moment for all of us," said Stephen Corley, 19, who had been camping outside the arena since Tuesday.

"We all have a common purpose and a common goal here," he said. "It's a once-in-a-lifetime opportunity."

Oklahoma is so overwhelmingly Republican that Trump's job isn't so much to win over locals as to revive a campaign rocked by his handling of the pandemic and weeks of racial tensions.

Some of the flak comes from presidential challenger Joe Biden and other Democrats, but a handful of fellow Republicans have also landed painful blows.

The latest and most stinging critique came this week from former national security advisor John Bolton, ahead of the release of his memoir describing Trump as ignorant and corrupt.

With polls showing him trailing Biden, Trump is eager to change the narrative, and rallies have long been his favorite political tool.

But while Trump rolls the political dice, the crowd, and what could be tens of thousands of Trump supporters and anti-Trump protesters outside, will be gambling with their health.

Oklahoma virus cases have spiked recently, and the state's total as of Saturday has surpassed 10,000.

On Friday, Oklahoma's Supreme Court ruled against a lawsuit seeking to halt the rally over health concerns.

"We are confident that we can operate safely in Tulsa," White House press secretary Kayleigh McEnany said.

Rally organizers will provide everyone with hand sanitizer, temperature checks and optional masks, said McEnany, who noted that she herself would be maskless at the rally.

Attendees must sign a waiver protecting organizers from any liability in the event COVID-19 spreads at the venue.

Trump remains adamant about not being seen in a mask and for weeks has insisted the virus is disappearing, allowing the economy to open back up.