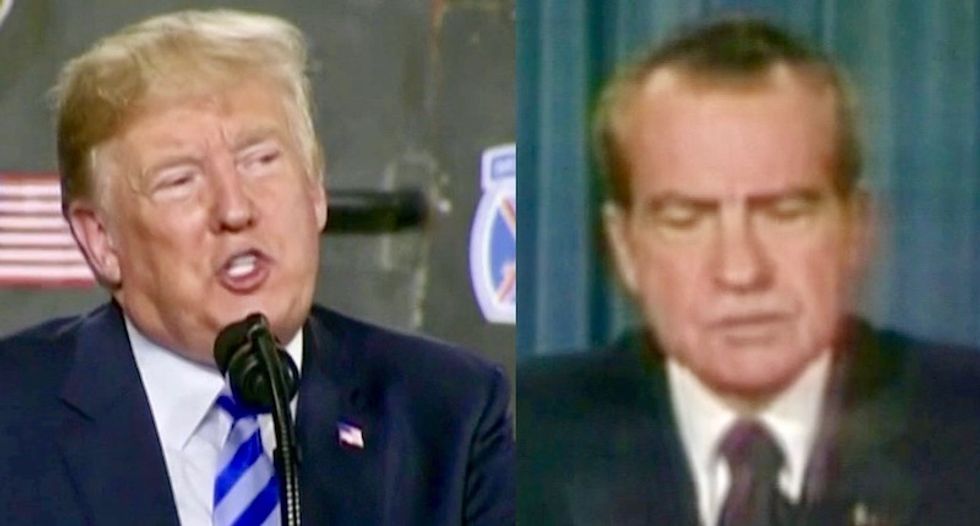 President Donald Trump thinks that vowing to crack down on anti-police brutality protesters while promising "law and order" will be electoral gold for him, just as it was for Richard Nixon in 1968.

However, Princeton historian Kevin Kruse believes that there's a central flaw in the president's thinking: Namely, he's now the incumbent, whereas Nixon in 1968 was the challenger.

In fact, Kruse notes that in his 1972 campaign, Nixon has dropped the ominous "law and order" messaging from his first campaign and instead ran a campaign touting greater unity and prosperity.

"Four years later, the incumbent Nixon knew he couldn't wage a 'law and order' campaign because... that's essentially a call for change," he said. "So he went with this sunny, upbeat ad that might as well have been a Coke commercial."

Kruse then links to the "Nixon Now" 1972 ad that features footage of Nixon acting as a statesman and a diplomat rather than a jack-booted authoritarian.

"If Trump and his aides were smart (I know, I know), they'd be running a re-election campaign like the second ad," Kruse explains. "That route got Nixon re-elected in a landslide, and the exact same approach did the same thing for Reagan in 1984."

Watch the "Nixon Now" ad below.