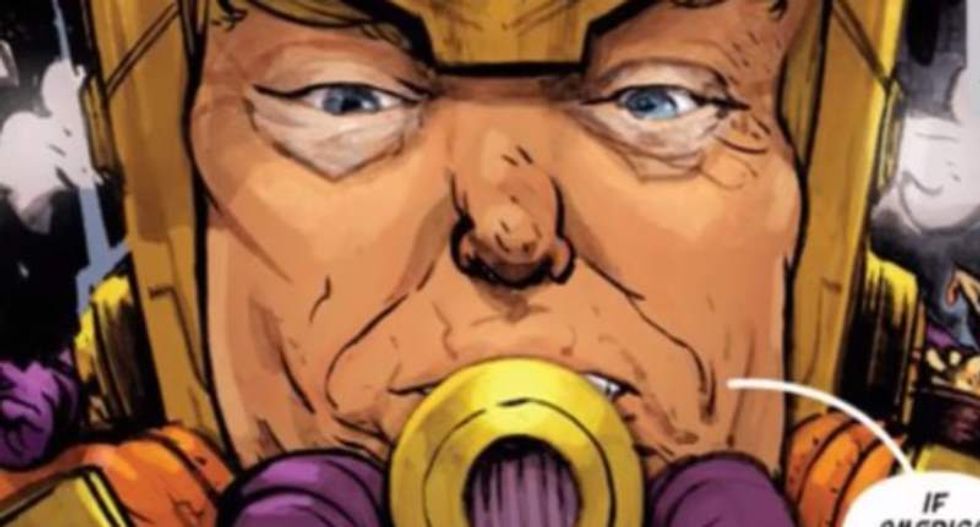 Donald Trump's likeness is used for the character MODAAK in Marvel Comics. (Wochit)

Two and a half years ago, top officials from the U.S. Department of Veterans Affairs rang the closing bell of the New York Stock Exchange. Standing on the podium with them was a cheering, flexing Captain America. Spider-Man waved from the trading floor below.

The event had been billed as a suicide prevention awareness campaign. No one could figure out what the Marvel characters were doing there. David Shulkin, the VA secretary at the time, said in a memoir about his tenure that he was as surprised as anyone.

The answer, it turns out, lies with the sweeping influence over the VA that President Donald Trump gave to one of his biggest donors, Marvel Entertainment chairman Ike Perlmutter.

Before the event, Perlmutter emailed senior VA officials that he had “arranged” for Marvel characters to be there, according to a newly released yearlong audit by the Government Accountability Office, Congress’ independent watchdog.

Recognizing the potential for ethical questions, a VA official sought advice from the agency’s lawyers. “Marvel Communications is doing this and we don’t, as far as I know, do business with them,” the unnamed official wrote in an email cited in the GAO report.

The report reinforces the findings of ProPublica’s investigation into the sway that Perlmutter and his friends held at the VA, even though none of them had experience serving in the U.S. military or government.

After the election, Trump asked Perlmutter, an intensely private billionaire, to advise him on veterans issues, and Perlmutter enlisted the help of a doctor, Bruce Moskowitz, and a lawyer, Marc Sherman.

The trio “created a ‘shadow reporting structure’ in which they were stakeholders without a formal role,” an unnamed former official told the GAO.

They became known inside the VA as the “Mar-a-Lago Crowd” because they met at Trump’s club in Palm Beach, Florida, where Perlmutter is a paying member.

Perlmutter, Moskowitz and Sherman communicated with VA officials as often as every day from late 2016 until mid-2018, the GAO said, giving advice and recommendations on VA policies, programs and personnel.

Sens. Elizabeth Warren and Brian Schatz, who requested the GAO’s review after ProPublica’s coverage, said the report confirms that Trump empowered his friends to secretly steer the second-largest government agency without any accountability or oversight.

“Three unqualified, unaccountable cronies used their personal relationship with the president and membership at his country club as leverage to exert personal influence over health care, technology, personnel and other key decisions at the Department of Veterans Affairs,” Warren, D-Mass., said in a statement. “The VA must make decisions based only on the best interests of veterans — not on the whims of private individuals with special access to the president.”

In a statement, Perlmutter, Moskowitz and Sherman said they provided assistance to the president and VA officials who asked for it. “We volunteered to assist the VA solely because we wanted to help America’s veterans get the best possible care,” they said.

Disney, which owns Marvel, didn’t immediately respond to a request for comment.

The VA told the GAO it had no comments on the report. In a statement to ProPublica, VA press secretary Christina Noel said, “This report vindicates the department and completely undermines the sensational way many media outlets covered this story.”

In more than 1,000 email exchanges, as well as interviews with current and former officials, the GAO found that the trio interacted with the VA about a large number of issues: hiring of senior executives, a $10 billion contract to overhaul the agency’s electronic medical records, suicide prevention and mental health efforts, a conference on registries for medical devices, and a government partnership with Apple to develop a mobile app.

The trio also discussed “veterans’ ability to seek health care outside of VA facilities,” the GAO said. That issue — which Trump calls “choice” and critics call a march toward privatization — was a campaign promise and political priority for the president.

The House Veterans Affairs Committee has its own investigation into Perlmutter, Moskowitz and Sherman. In particular, House investigators have shown interest in a possible connection to a risky antidepressant that Trump has personally promoted for preventing veteran suicides. A spokesman for the trio has said they weren’t involved in the VA’s consideration of the drug.

Do you have access to information about the VA that should be public? Email Isaac Arnsdorf at isaac@propublica.org. Here’s how to send tips and documents to ProPublica securely.