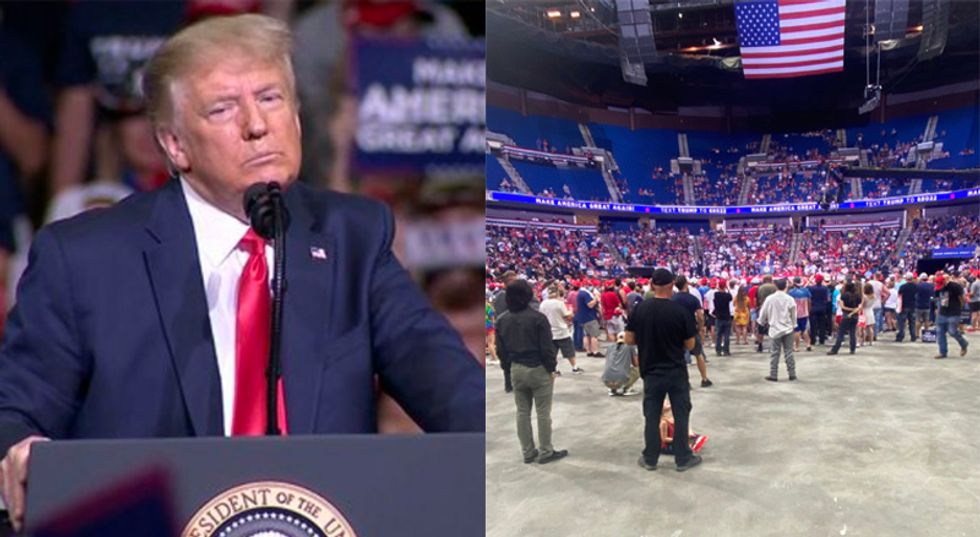 It was reported hours before President Donald Trump's rally in Tulsa, Oklahoma Saturday, that six members of his advance team tested positive for the coronavirus. Now that the team members are back from the rally, two more have now tested positive.

The president wasn't happy that word got out about the Trump staffers were testing positive of COVID-19.

MSNBC's Brian Williams made the announcement on-air, saying that it was revealed the staff members did wear masks while they were at the rally, which contrasted with other Trump staff who said they wouldn't wear masks.

"Given their job description," Williams said to Dr. Vin Gupta, "by nature as advance people, those are the folks who fly in early, they do security, they arrange the motorcade, they do the signage, they do seat selections, all of it, one can assume they were in Tulsa for days in advance, your reaction to this and is this just the tip of the iceberg?"

"Absolutely, Brian. This is the worst-case scenario," said Dr. Gupta. "We knew this was going to happen. We begged the president, 'don't do this.' On-air, saying 'Please, don't do this.' At least have it outside because we knew that there were going to be individuals positive unfortunately on his own team that would then be potential superspreaders. What you saw two nights ago was horrific. A bunch of individuals not wearing masks, and then you have a president who said we should be slowing down testing, we should be testing everybody in that arena, now, a week from now and then doing contact tracing. The president said, let's slow down testing -- which is criminal. Public health malpractice at this point. This is horrific. I'm right now in an ICU caring for COVID patients. This is not what we want to be hearing. We're worried about the Tulsa situation. As I understand it, this isn't going to be the first of its kind."