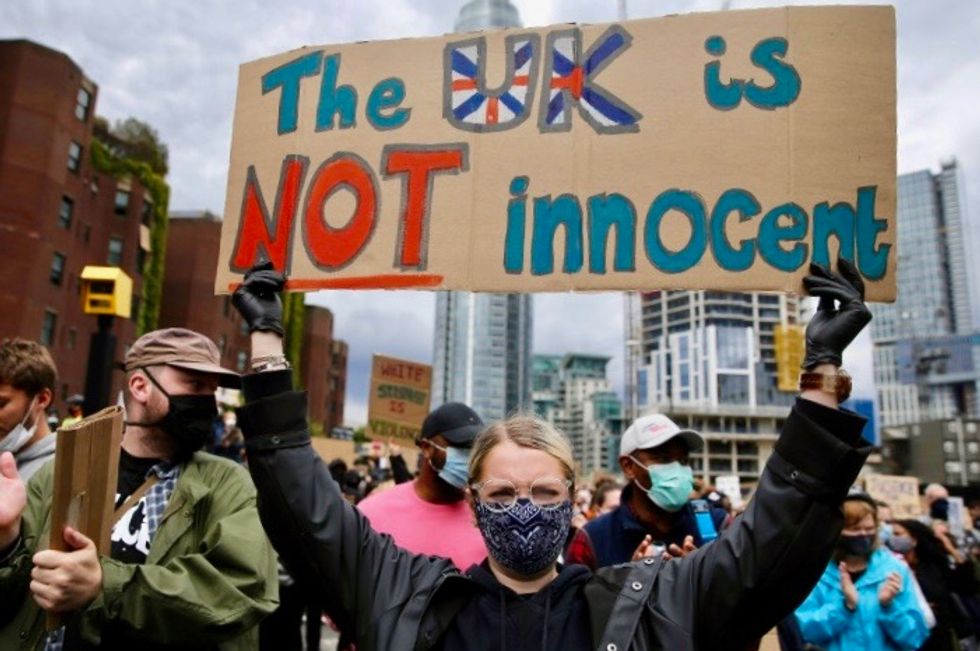 Protesters tore down the statue of a notorious British slave trader Sunday and dumped it in a harbour on the second day of demonstrations against George Floyd's death.

Footage showed a few dozen people tie a rope around the neck of Edward Colston's statue and bring it to the ground in the southwestern city of Bristol.

They stamped on it for a few minutes before carrying it and heaving it into the harbour with a great cheer.

Red paint was splashed on Colston's face and a protestor put his knee to the statue's neck to recall how Floyd -- an unarmed African American -- was asphyxiated by a white policeman in the US city of Minneapolis last month.

"The man was a slave trader. He was good to Bristol but it was on the back of slavery and that is absolutely not on. It's an insult to the people of Bristol," 71-year-old protestor John McAllister told Britain's Press Association.

"The statue of Edward Colston, a Bristol slave trader, was torn down, defaced, and thrown in the river. #BlackLivesMatter."

But interior minister Priti Patel called the toppling "utterly disgraceful". The city's police promised to carry out an investigation.

"That speaks to the acts of public disorder that actually have now become a distraction from the cause which the people are actually protesting about," Patel told Sky News.

"That is a completely unacceptable act and speaks to the vandalism, again, as we saw yesterday in London."

The London police reported making 29 arrests during a day of largely peaceful protests Saturday that included a few scuffles with officers protecting the government district around Downing Street.

Prime Minister Boris Johnson condemned the sporadic violence but did not directly address the toppling of the statue.

"These demonstrations have been subverted by thuggery -- and they are a betrayal of the cause they purport to serve," Johnson said in a tweet.

"I know the removal of the Colston Statue will divide opinion, as the statue itself has done for many years," the mayor said in a statement.

"However, it's important to listen to those who found the statue to represent an affront to humanity."

Colston grew up in a wealthy merchant family and joined a company in 1680 that had a monopoly on the west African slave trade.

The Royal African Company (RAC) was formally headed by the brother of King Charles II who later took the throne as James II.

The company branded the slaves -- including women and children -- with its RAC initials on their chests.

Colston later developed a reputation as a philanthropist who donated to charitable causes such as schools and hospitals in Bristol and London.

His 18-foot (5.5-meter) bronze statue stood on Bristol's Colston Avenue since 1895. The city also has a school named in his honor.

The Guardian newspaper said a local petition to remove the statue had gathered 11,000 signatures by the weekend.

"Someone responsible for immeasurable blood & suffering. We’ll never solve structural racism till we get to grips with our history in all its complexity. #BLM"