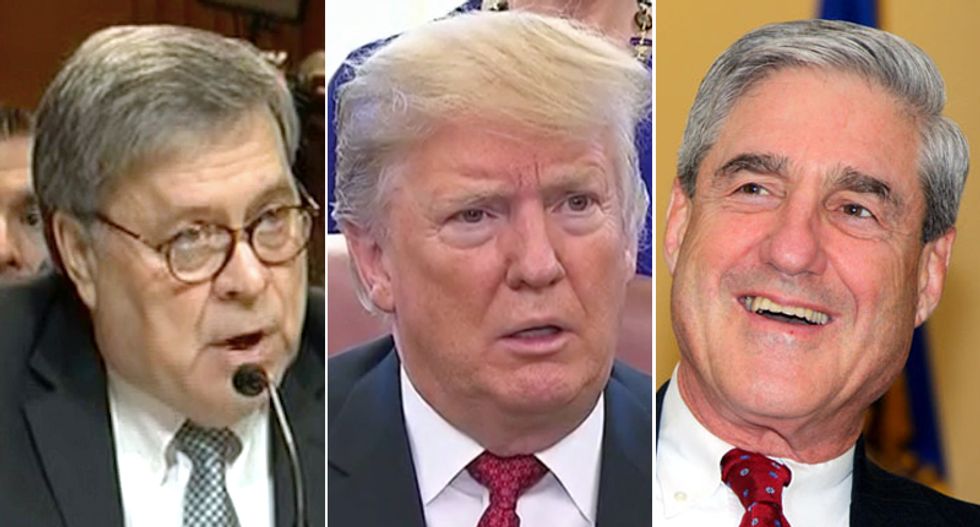 In one section of the newly released information, Mueller weighed the possibility President Donald Trump had lied to him in his written answers to a series of questions. Any such lies would be potential criminal acts.

Trump appears to have lied when he said:

I do not recall being told during the campaign that Roger Stone or anyone associated with my campaign had discussions with any of the entities named in the question regarding the content or timing of release of hacked emails.

I do not recall discussing WikiLeaks with him, nor do I recall being aware of Mr. Stone having discussed WikiLeaks with individuals associated with my campaign, although I was aware that WikiLeaks was the subject of media reporting and campaign-related discussion at the time.

However, as the report now reveals, these denials not seem accurate.

"[Michael] Cohen recalled a conversation in which Roger Stone told Trump that WikiLeaks planned to release information soon, and Manafort recalled that Trump had asked him to stay in touch with Stone about WikiLeaks," a newly unredacted section explained.

It continues: "It is possible that, by the time the President submitted his written answers two years after the relevant events had occurred, he no longer had clear recollections of his discussions with Stone or his knowledge of Stone's asserted communications with WikiLeaks. But the President's conduct could also be viewed as reflecting his awareness that Stone could provide evidence that would run counter to the President's denials and would link the President to Stone's efforts to reach out to WikiLeaks."

According to [Rick] Gates, by the late summer of 2016, the Trump Campaign was planning a press strategy, a communications campaign, and messaging based on the possible release of Clinton emails by WikiLeaks.Gates also stated that Stone called candidate Trump multiple times during the campaign. Gates recalled one lengthy telephone conversation between Stone and candidate Trump that took place while Trump and Gates were driving to LaGuardia Airport. Although Gates could not hear what Stone was saying on the telephone, shortly after the call candidate Trump told Gates that more releases of damaging information would be coming.

During his testimony to the House of Representatives, Mueller said that he did not believe all of Trump's answers to him were truthful.

The report now shows that Mueller believed the evidence supported the notion that Trump's conduct toward Stone during the investigation could constitute obstruction of justice. Analyzing the president's behavior, the report explains:

On November 28, 2018, eight days after the President submitted his written answers to the Special Counsel, the President criticized "flipping" and said that Stone was “very brave” for not cooperating with prosecutors. Five days later, on December 3, 2018, the President applauded Stone for having the “guts” not to testify against him. These statements, as well as those complimenting Stone and Manafort while disparaging Michael Cohen once Cohen chose to cooperate, support the inference that the President intended to communicate a message that witnesses could be rewarded for refusing to provide testimony adverse to the President and disparaged if they chose to cooperate.

Trump has also recently strongly indicated that Stone, who is due to soon report to prison for the charges he faced as a result of Mueller's investigation, will likely be getting a pardon. If Stone does get the pardon, it could easily be seen as follow through on the message Mueller believe Trump was likely communicating, finally "rewarding" Stone.

The new information was released after BuzzFeed News brought a Freedom of Information Act lawsuit against the administration seeking the redacted material.