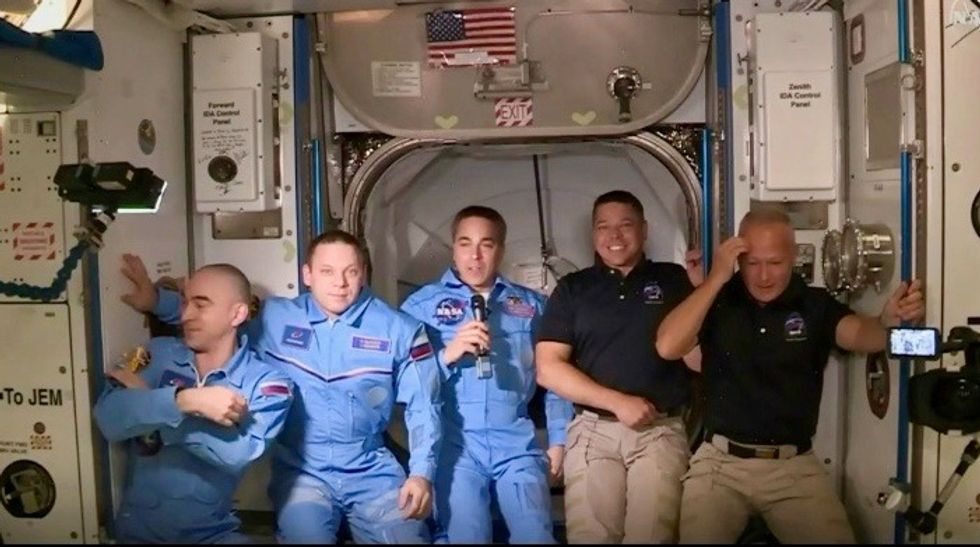 Douglas Hurley (R) and Robert Behnken (2ndR) arrive at the International Space Station, to be greeted by other astronauts NASA/AFP

NASA astronauts entered the International Space Station on Sunday after a landmark 19-hour journey on the first crewed US spacecraft in nearly a decade, a triumph for SpaceX and private enterprise.

The arrival completed the first leg of the trip, designed to test the capabilities of the Crew Dragon capsule. But the mission will only be declared a success when the astronauts return safely to Earth in a few months' time.

The spaceship's hatch opened at 1:02 pm Eastern Time (1702 GMT) as Bob Behnken and Doug Hurley carried out final procedures before crossing the threshold about 20 minutes later.

The five men posed for photos and then NASA administrator Jim Bridenstine spoke to the crew from mission control in Houston.

"Welcome to Bob and Doug," said Bridenstine. "I will tell you the whole world saw this mission, and we are so, so proud of everything you have done for our country."

"It's great to get the United States back in the crewed launch business and we're just really glad to be on board this magnificent complex," replied Hurley.

Russian space chief Dmitry Rogozin also offered his congratulations to both NASA and Elon Musk, the boss of the private aerospace company SpaceX that built the Crew Dragon capsule.

The capsule spent 19 hours chasing down the station at speeds of up to 17,500 miles per hour (28,000 kph), before carefully aligning to its target and slowing to a crawl for the delicate docking procedure, which took place over northern China.

During their stay Behnken and Hurley will perform more checks on the capsule to certify its readiness as the United States transitions to using the commercial sector for rides to the ISS.

The space agency has had to rely on Russian Soyuz rockets ever since the Space Shuttle program ended in 2011 -- with 2015 the original target for a replacement program.

The United States has paid SpaceX and aerospace giant Boeing a total of about $7 billion for their "space taxi" contracts.

But Boeing's program has floundered badly after a failed test run late last year, which left SpaceX, a company founded only in 2002, as clear frontrunner.

The launch comes as the world grapples with the coronavirus pandemic, and as the US faces nationwide protests after a black man died in Minneapolis while being arrested by a white police officer.

Speaking to Bridenstine, Hurley said he hoped the mission would inspire young Americans.

"This was just one effort that we can show for the ages in this dark time that we've had over the past several months to kind of inspire, especially the young people in the United States, to reach for these lofty goals," he said.

On Twitter, however, some retweeted the song "Whitey On The Moon" which was released by Gil Scott-Heron in 1970, the year after the Apollo 11 lunar landing.

The lyrics juxtaposed the injustice and economic conditions faced by black Americans with the enormous spending required for the space program.

"I'm really quite overcome with emotion," Musk said. "It's been 18 years working towards this goal." Hurley and Behnken had named their capsule "Endeavour" after the retired Space Shuttle on which they both flew.

Asked by a lawmaker how the Crew Dragon's handling compared to that of the shuttle, Behknen indicated the new ship was a rougher ride.

"Dragon was huffing and puffing all the way into orbit, and we were definitely driving or riding a dragon all the way up," he said. "And so it was not quite the same ride, the smooth ride, as the Space Shuttle was."

While Russia saluted the United States, it also stressed Sunday it was puzzled by the frenzy unleashed by what many hailed as the dawn of a new era.

US-Russia cooperation is not expected to end once Crew Dragon goes into service.

NASA still plans to use Soyuz rockets to send some astronauts into space, with each seat costing around $80 million.

The United States, meanwhile, hopes to revive human space exploration, which has not risen to the expectations of the early space era.

The idea of a crewed mission to Mars has been mooted since the 1950s, and NASA has commissioned numerous studies that have never gotten off the ground.

The United States now plans to return to the Moon in 2024 under the Artimis mission, establishing a launching pad to the Red Planet by the 2030s.

Douglas Hurley (R) and Robert Behnken (2ndR) arrive at the International Space Station, to be greeted by other astronauts

In this still image taken from NASA TV, NASA astronauts Bob Behnken (front) and Doug Hurley reach orbit on May 30, 2020, after launching from Kennedy Space Center in Florida

A SpaceX Falcon 9 rocket carrying the Crew Dragon spacecraft takes off from launch complex 39A at the Kennedy Space Center in Florida on May 30, 2020