US cities brace for more fury as officer hearing postponed 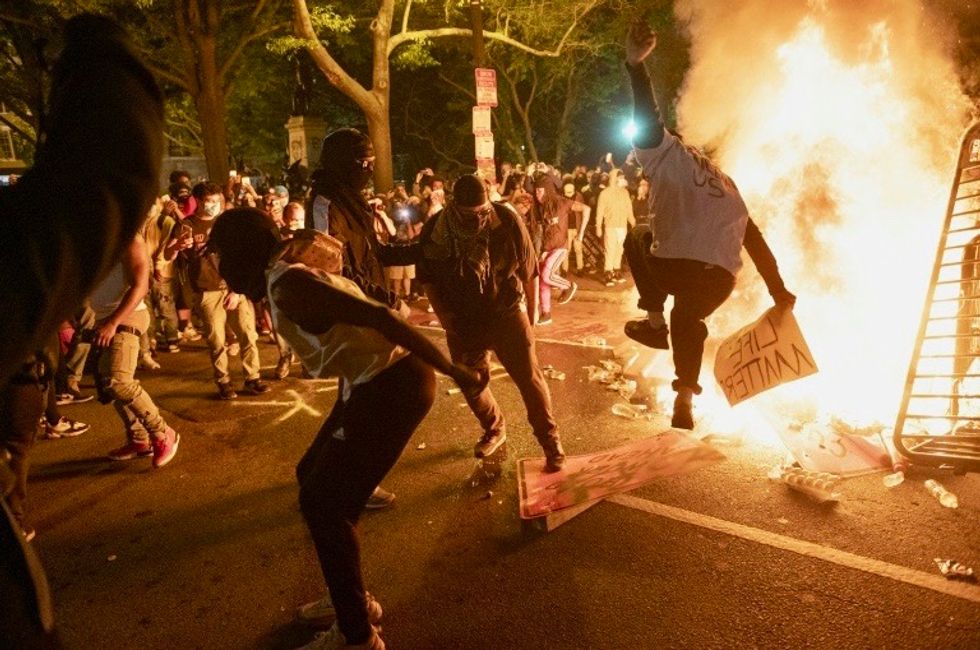 US cities braced Monday for more fury on the streets as a hearing was postponed for a Minneapolis police officer over the killing of an unarmed black man that ignited the country' most sweeping unrest in decades.

Violence erupted outside the White House for the third straight night Sunday with police firing tear gas and protesters setting nearby structures ablaze, as inside Donald Trump refrained from delivering the sort of unifying national message historically associated with US presidents.

Some 40 US cities including Chicago, Los Angeles, Philadelphia and Washington have imposed rare nighttime curfews in hopes of quelling unrest, which included a death overnight in Louisville, Kentucky.

Protests, initially peaceful, erupted after the killing a week ago of George Floyd, a black man in Minneapolis who was accused of buying cigarettes with a counterfeit bill.

In shocking final moments captured on video, Floyd pleaded for his life and said he could not breathe as a white police officer, Derek Chauvin, knelt on his neck for nearly nine minutes.

"We are tired of this happening. This generation is not having it. We are tired of oppression," said Muna Abdi, a 31-year-old African-American woman at a peaceful demonstration at the Minnesota capitol in St. Paul on Sunday.

Pointing to her three-year-old son, she said: "I want to make sure he stays alive."

AFP / CHANDAN KHANNA A demonstrator lies on the highway in front of the police line during a protest over the death of George Floyd on May 31, 2020 in Minneapolis

Chauvin, who had remained in the police force despite persistent complaints about his behavior, had been due to appear in court on Monday but the judiciary said the initial hearing had been postponed to June 8.

The news immediately triggered a storm on social media, a major organizing ground for protests, with outraged activists vowing to keep up pressure over the coming week.

Such delays are common in criminal cases in the United States. Minnesota has made clear that it seeks to punish Chauvin and has tasked the prosecution personally with the state's attorney general, Keith Ellison, a prominent former US congressman.

But protesters have also demanded the arrest of three police officers who stood by and shielded Chauvin from outsiders as Floyd pleaded for his life.

St. Paul Mayor Melvin Carter, an African-American and son of a police officer, supported arresting the trio, saying all police had a duty to intervene.

"That is an incredible insult to our humanity," he told CNN of the three officers who apparently abetted Chauvin.

The overwhelming number of protesters have been peaceful, with multiracial marches seeking an end to racism and police brutality, but consecutive evenings have descended into clashes with officers and widespread looting.

Washington's mayor, Muriel Browser, said a curfew will start Monday at an unusually early 7.00 pm in hopes of preventing a repeat of the destruction in the US capital -- which included a fire at St. John's, the two-century-old "church of the presidents" across from the White House.

Apple, along with several other major retailers, temporarily closed most US stores -- which were just emerging from a two-month lockdown to address the coronavirus pandemic -- and California said it was shutting government offices in crowded areas as a precaution.

It was the most widespread unrest in the United States since 1968, when cities went up in flames over the slaying of civil rights icon Martin Luther King Jr., and rekindled memories of 1992 riots in Los Angeles after police were acquitted in the brutal beating of black motorist Rodney King.

But unlike in Los Angeles, the latest unrest has primarily targeted property, although both protesters and police have reported non-life-threatening injuries.

One person was killed, however, in Kentucky's largest city Louisville. Police chief Steve Conrad said officers and the National Guard "returned fire" just after midnight after being shot at as they dispersed a crowd in a parking lot.

Governor Andy Beshear said he was ordering an independent investigation "given the seriousness of the situation."

The dead man was David McAtee, the owner of a popular barbecue business, according to the Louisville Courier Journal, which quoted his nephew.

Louisville, the home of Muhammad Ali and Kentucky Fried Chicken, has seen especially passionate protests due to the police killing in March of an African American woman, Breonna Taylor, in her own apartment.

The 26-year-old emergency room technician was shot dead after police barged into her home, alleging that drug dealers had used the apartment to receive packages.

While presidents traditionally seek to bridge national divides during tumult, Trump was again holed up at the White House tweeting attacks on his political rivals and the media.

He has blamed the violence on Antifa, the loosely organized collective of far-left activists who advocate aggressive action to stop what they see as the rise of fascism and white supremacists.

Asked why Trump has not spoken to the nation, White House press secretary Kayleigh McEnany told Fox News on Monday: "A national Oval Office address is not going to stop Antifa."

Trump, while critical of the killing of Floyd, has urged authorities to use aggressive force against looting -- with one message even labeled by Twitter as violating its rules on glorifying violence.

Joe Biden, Trump's likely Democratic opponent in November elections, on Sunday visited a protest in his home of Wilmington, Delaware, and pledged that, as president, "I will help lead this conversation -- and more importantly, I will listen."

Trump's predecessor Barack Obama, the nation's first African-American president, in an essay Monday voiced hope that the protests would bring lasting change, while condemning the "small minority" that has resorted to violence.

"If, going forward, we can channel our justifiable anger into peaceful, sustained, and effective action, then this moment can be a real turning point in our nation's long journey to live up to our highest ideals," Obama said.