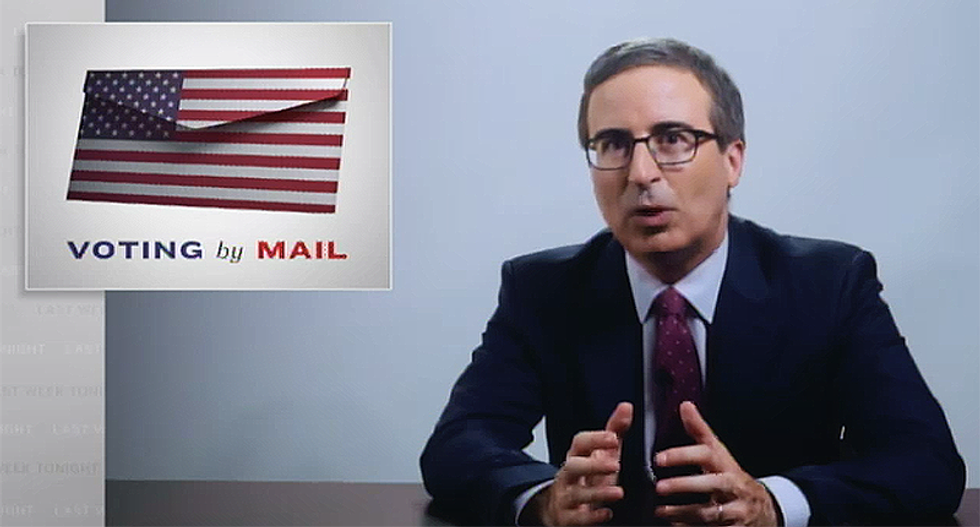 "Last Week Tonight" host John Oliver's main story Sunday refuted President Donald Trump's latest crusade against vote-by-mail. Trump announced on Twitter that the more people who vote in an election, the more Republicans tend to lose. So, he wants fewer people to have access to the ballot in November, even if people are too scared to go out during the coronavirus crisis.

Oliver called out Missouri Gov. Mike Parson (R-MO), who outright told people not to vote if they were too afraid to vote in the local elections next week.

"Well, hold on there," Oliver interjected. "Voting is a right. It has to be easy to understand and accessible to anyone."

He went on to outline why concerns about vote-by-mail are so overblown, why it's necessary, and why talking about it on his show is one of the most important things he can do.

The best example of the reason to institute a vote-by-mail system is looking at Wisconsin, he explained. The state held a primary election, despite quarantines and fears of the coronavirus spreading throughout the state. Because the election was constitutionally mandated, the state supreme court forced it to happen whether there was a public health threat or not. As a result, the vote was "absolute chaos," a massive reduction in polling sights meant that there were massive lines. Hundreds of ballots never arrived, some of those requesting it or arrived late, and some were forced to vote while wearing garbage bags because they were immune-compromised.

To make matters worse, there was an increase in COVID-19 cases in Wisconsin that were directly tied to the primary election.

"Coronavirus doesn't give a f*ck about democracy," Oliver explained. "It's just one of the many ways that COVID-19 is the Donald Trump of infectious diseases. It's weirdly shaped and disproportionately harmful to minorities."

He went on to explain that the only way to prevent another Wisconsin, multiplied by 50, is by allowing people a vote-by-mail option.