WATCH: White man in Berkeley goes on profane rant after tearing down protest signs on Juneteenth 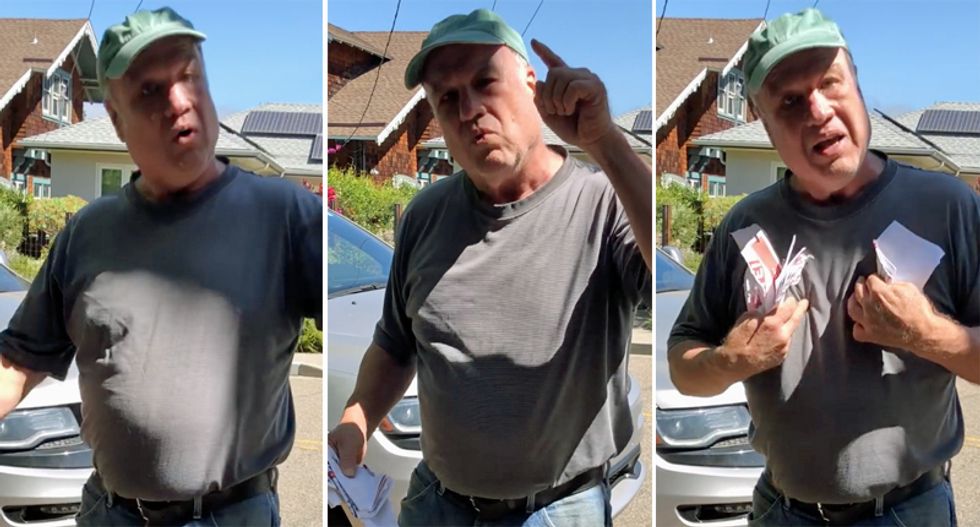 Berkeley, California was the scene of an angry and profane confrontation after a white man reportedly tore down protest signs on Juneteenth.

"As many of you know, I started a call to action to #ChalkforJustice tomorrow, 6/20 because one of my neighbors complained about my kids and I chalking #BlackLivesMatter on the sidewalk. About an hour ago, in my Berkeley neighborhood my kids and I were doing some chalking when I noticed a white man rip down my Chalk for Justice signs and rip them up," Henriette Selestine posted on Facebook.

"I confronted him here and captured some of the interaction on video. (Mind you I’m pregnant and had my two toddlers with me.) Fortunately, one of my white neighbors and another passerby jumped in and confronted the man as he walked away," she explained. "This is why it is so important that EVERYONE show their solidarity for #BlackLivesMatter. This is the kind of racist ignorance that is so pervasive STILL on Juneteenth in 2020."

In the video, the man says he is proud of his views.

"You're recording this, but that's fine, because I have no, no embarrassment over what I'm doing," he said.

However, later in the video, he refused to give his name.

"What a dumbass chick you are," he said.

"Do you want to tell us your name for the camera?" she asked.

"You go f*ck yourself," he replied.

"Thank you, I really appreciate the profanity in front of my children," she said as the man walked off.