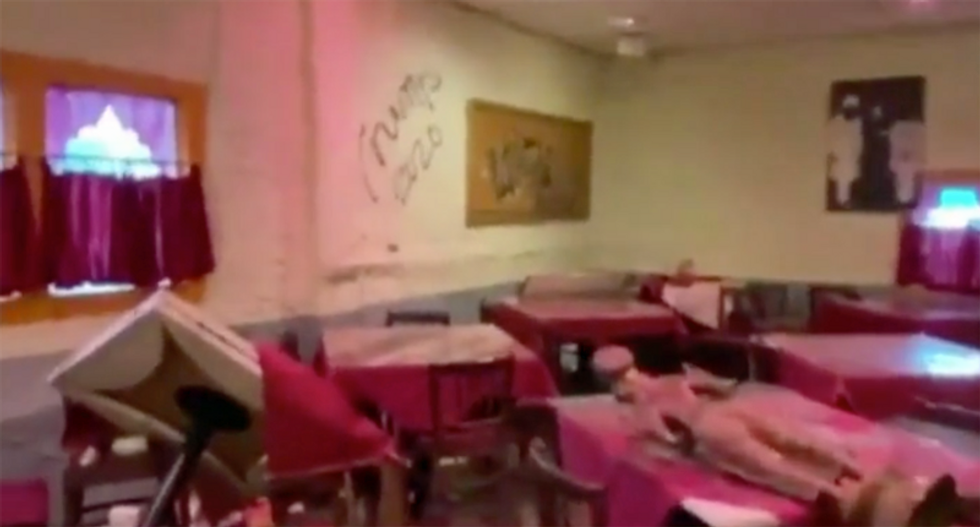 The India Palace was vandalized with "white power" and "Trump 2020" graffiti by vandals who caused over $100,0000 in damage, according to the Santa Fe Reporter.

"Tables were overturned, glassware was smashed into piles on the floor. The wine racks were emptied, a statue of a goddess was beheaded and computers were stolen. Food warmers were turned over and destroyed. The front desk area was gutted, plates smashed and the kitchen rendered completely unusable," the newspaper reported.

"Among the items stolen or damaged include supplies that Brown and the Singhs would use to create weekly care packages for downtown’s unhoused population," the newspaper noted. "While recent acts of vandalism against downtown monuments that some consider racist have brought heightened attention to this sort of crime, this attack is marked by white supremacy, is much more involved and has a personal target."

"According to the Singhs, last Thursday during a Three Sisters Collective protest on the Plaza an armed man incorrectly parked his car in one of India Palace’s spots. When he was asked to move, he threatened the family with his guns; police were called and collected the vehicle’s information. The man identified himself as a nearby business owner before heading in the direction of the Plaza with multiple guns and magazines," Santa Fe Reporter explained.

Police are now investigating the incident as a hate crime.

“This case has been classified as a hate crime, and the Santa Fe Police Department is aggressively pursuing those responsible for this disgusting display of hatred and intolerance,” the department said in a press release.

This hate crime at India Palace is sickening and appalling. We need to stand up as a community and denounce this de… https://t.co/PxsYTA8OtI
— Mayor Alan Webber (@Mayor Alan Webber) 1592935272.0

Relatives of 10 workers trapped in a flooded coal mine in northern Mexico clung to hope they were still alive Friday, nearly 48 hours after a cave-in sparked a major rescue operation.

Canada announced Friday it will ban the import of handguns beginning on August 19, as part of a wider proposed freeze in the wake of high-profile mass shootings in the United States.

Such guns "have one purpose and one purpose only and that is to kill people," Public Safety Minister Marco Mendicino told a press briefing announcing the move.

'Venezuela and Australia are gone!' Mike Lindell uncorks CPAC rant about countries being 'taken by the machines'

MyPillow CEO Mike Lindell on Friday brought his personal crusade against voting machines to the Conservative Political Action Conference (CPAC), where he uncorked a conspiratorial rant claiming that the voting machines had completely overtaken dozens of foreign countries.