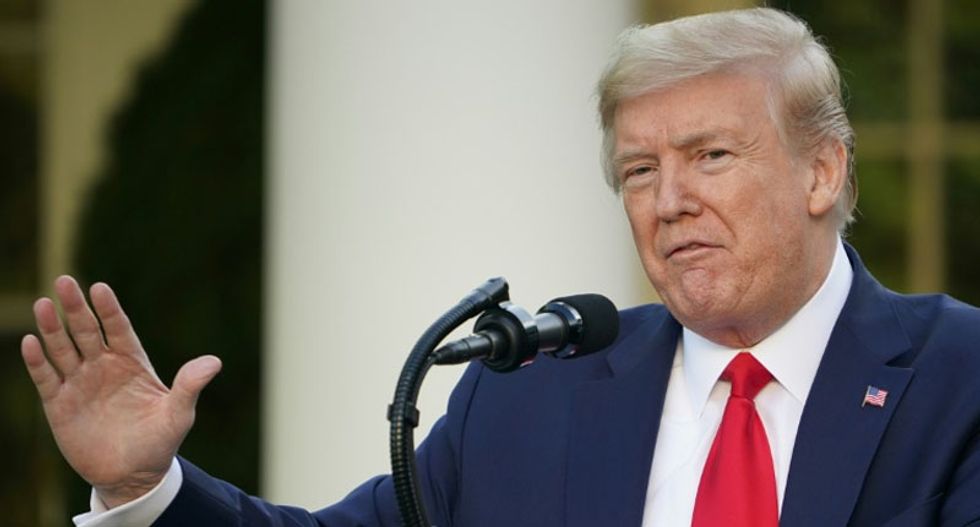 President Donald Trump's newly-appointed head of the U.S. Agency for Global Media was criticized Thursday for enacting what one former employee called a "Wednesday night massacre"—firing several career officials at the agency which oversees government-funded news broadcasters around the world, including Voice of America.

Liu was fired despite the fact that she had earlier announced her resignation, effective in July. The director and deputy director of Voice of America, Amanda Bennett and Sandra Sugawara, also resigned after Pack was confirmed.

Pack has already replaced several of the officials with Trump allies and political appointees, and is expected to name former Breitbart News writer Jeffrey Shapiro as the head of the Office of Cuba Broadcasting.

Both Shapiro and Pack are close allies of Steve Bannon, Trump's former advisor who formerly worked as the executive chairman of Breitbart News. Pack, a right-wing filmmaker, made two documentary films with Bannon about nuclear power and the Iraq War.

Shapiro reportedly said in 2017 that he aimed to one day remake the USAGM as a "Bannon legacy," and in 2016 wrote an op-ed denying claims that Bannon is a white nationalist.

Walter Shaub, the former director of the Office of Government Ethics, tweeted that Pack's actions in his first days at the helm of the USAGM was "alarming."

"The Breitbart crowd may be getting a taxpayer-funded global platform," wrote Shaub.

The "Wednesday night massacre" came on the heels of numerous attacks from the president of Voice of America (VOA), which he claims broadcasted Iranian and Chinese propaganda, particularly regarding the coronavirus pandemic. In April, Trump said delays in Pack's confirmation hearings were preventing the administration from "managing" VOA.

Progressive critics have long considered VOA a vehicle for U.S. government propaganda overseas, promoting American-friendly coverage of world events while masquerading as an independent "voice." Still, the overt takeover by a Trump sycophant and political supporter has raised particular alarm.

As Jon Allsop wrote at Columbia Journalism Review on Wednesday, VOA and the other news organizations operating under the USAGM do not operate entirely independently of the federal government's interests.

"While VOA is mandated by Congress to do independent journalism and its leaders have sometimes sought to style it as a normal news organization, there's no getting around the fact that it was founded, during the Second World War, as a vehicle for American soft power, and never really abandoned that role," Allsop wrote.

However, he added, "Trump's very public attitude toward VOA is ample cause for concern," as the president could be aiming to use the broadcaster as a tool in his "fitful, moral-free approach to US foreign policy."

Nina Jankowicz of the nonpartisan Wilson Center expressed concern that as "cut-and-dry administration mouthpieces" VOA and its partner broadcasters will disappear as sources of news in parts of the world "where there otherwise might not be one."

This is worrying on so many levels- but the biggest is that if these outlets become cut-and-dry administration mout… https://t.co/pqLMPMahIa
— Nina Jankowicz (@Nina Jankowicz) 1592446508.0

Pack's dismissal of the longtime officials—and his demand Wednesday to staffers that "Until further notice, no actions are to be taken, and no external communications are to be made, without explicit approval" of the new executives—could also eventually endanger people working for USAGM around the world.

"Trump wants a ministry of information that will spew out the party line," Brett Bruen, director of global engagement under former President Barack Obama, told Asia Times. "It's a dangerous moment for democracy."