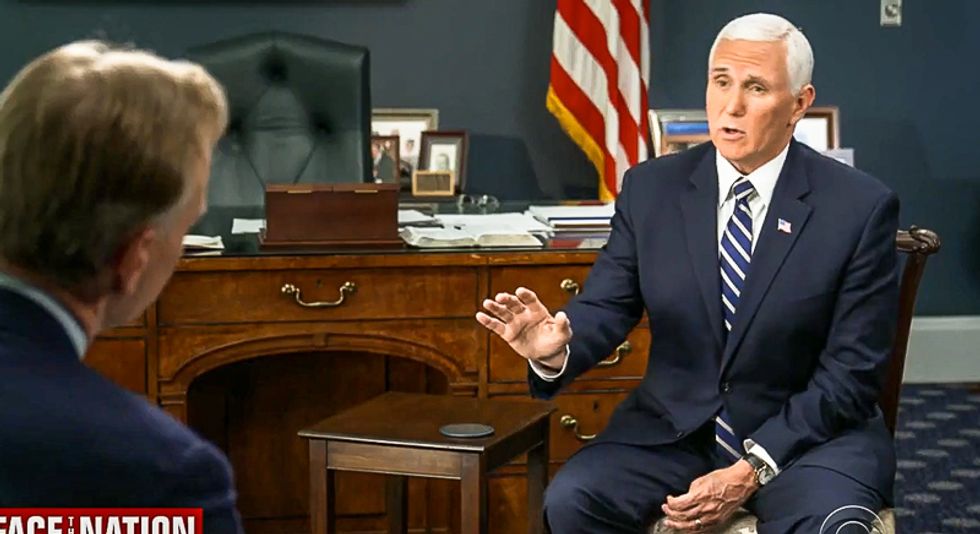 Vice President Mike Pence refused to say "Black lives matter" in an interview that aired over the weekend.

While speaking to John Dickerson on CBS's Face the Nation program, Pence was challenged to express his support for the value of Black lives.

"What the American people want is to fund the police with additional training and support," Pence explained. "And also improve the lives of people in our African-American community, which I'm proud to say, under President Trump's leadership, we were doing over the last three years."

"We don't need to chose between supporting law enforcement and supporting our African-American neighbors," he added. "We can do both. And that's how we bring our country together."

"One thing protesters would like to hear is leaders say Black lives matter," Dickerson noted. "You won't say that. Why?"

Struggling for words, Pence replied: "All my life, I've been inspired by the example of the Rev. Dr. Martin Luther King Jr. When I was in Congress, I traveled to his home church in Montgomery with Congressman John Lewis. I walked across the Edmund Pettus Bridge on the anniversary of Bloody Sunday."

"I cherish the progress that we have made," he continued, "for African-Americans throughout our history. And I've aspired throughout my career to be a part of that ongoing work. It's really a heart issue for me. And as a pro-life Americans, I also believe that all lives matter, born and the unborn."

Pence went on to accuse the "leaders" of the Black Lives Matter movement of a "political agenda of the radical left that would defund the police."

"Leave that out of it," Dickerson interrupted. "Just the phrase."

Pence complained that the Black Lives Matter movement "would tear down monuments, that would press a radical left agenda and support calls for the kind of violence that has beset the very communities that they've said they are advocating for."

"I've literally met with African-American leaders," Pence pushed on, "who made it clear to us they want law and order, they want peace in our streets."

"John, I really believe that all lives matter," Pence repeated. "That's where the heart of the American people lies."