'You're telling me everything is fine' when people don't show up in a red state: MSNBC's Tur hammers Trump campaign aide 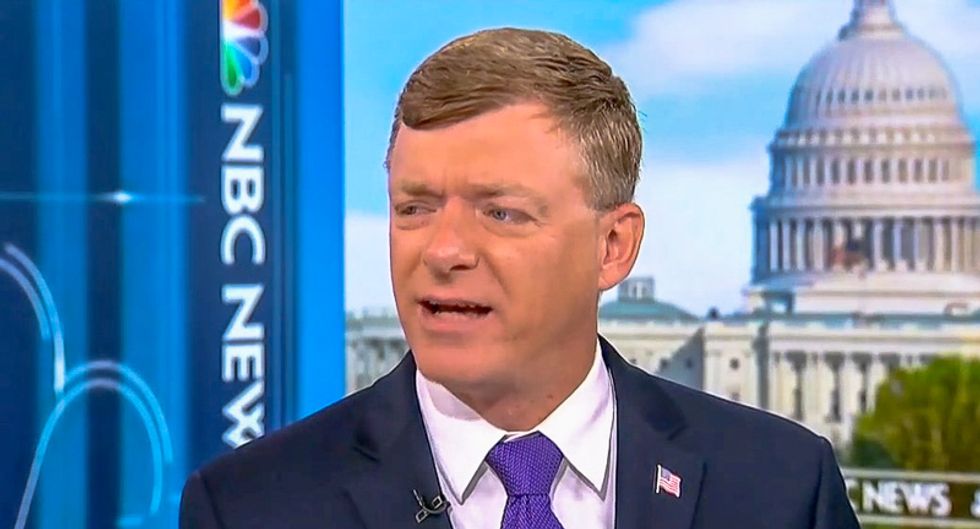 Top campaign aide to President Donald Trump, Marc Lotter, scrambled to try and explain away the embarrassing turnout, slumping polls, and so-called "misstatements" about COVID-19, during his Monday MSNBC appearance.

"We're doing so much testing," Trump said during a morning radio interview. "25 million tests, nobody thought that was--"

"But did you ask to slow it down?" the reporter asked.

"Uhh, frankly, if it did slow down -- I think we're way ahead of ourselves if you want to know the truth," Trump claimed. "We've done too good a job."

MSNBC host Katy Tur came out of the gate asking about the president's claim during his Saturday rally that he asked to slow down testing so it wouldn't look as bad.

"I'm curious, we hear the president there talking about slowing down testing," said Tur. "He said he was joking about it at the rally. The rally didn't have as many people as you had expected. Is this a sign that the president may not be on the same page with even a lot of his supporters that this virus is not going away, it is not going to be business as usual, and it is still a very serious threat?"

Lotter claimed that the thing that matters is that fewer people are dying. The problem with using that as a metric, however, is that the increase in COVID-19 cases has been relatively recent, depending on the state. If the hospitalizations continue to increase, and those people are put on ventilators, deaths could still continue to rise.

"We're seeing that as some of the new cases are being discovered, they're being discovered with milder symptoms that may not require as much hospitalization and ultimately hopefully will lead to fewer people succumbing to the disease," Lotter also claimed. That doesn't seem to be the case in Arizona, Texas and Florida, which are experiencing huge spikes in hospitalizations.

"When I look from the rally -- overall when you take a look at all of the viewers that we had on our online platforms and as well as some of the television ratings we have seen, 18 million people were watching that rally on Saturday night," Lotter claimed, using a similar refrain heard by Sean Spicer for why Trump's inauguration crowd was larger than former President Barack Obama. "I think that re-enforces that there is a very strong energy and enthusiasm for the president."

Tur noted that hospitalizations might be fine in many states, but health experts worry that will change. So, she asked her question again, is Trump out of step with his own supporters, who aren't willing to go back to normal?

"I think he is on the same page, and the fact that we're allowing people to make that choice for themselves -- I know there were probably many people who preferred to stay home and watch it online or watch it on television," said Lotter. "There were also those who wanted to come there and watch it in person. I know there were some wearing masks. Some chose not to wear masks. And so I think giving this as the option and recognizing that we have that freedom of choice is exactly in line with what the president's supporters are thinking..."

Tur explained that the rally was still expected to sell out, so much, so they had a second stage set up.

"When you take the people who showed up for this rally, you take all the polling that's out there that shows the president trailing Joe Biden in the majority of swing states; you talk about where the economy is right now, you talk about the pandemic and us not being on the other side of it. All of the racial unrest, when you put all of those things together, do you still feel good about where the campaign is right now?"

Lotter tried to explain that all of the polls in 2016 were wrong, so they're wrong now. He claimed that the campaign's "internal numbers" show Trump will win in November.

"You're looking at your internal numbers," Tur cut in. "I want to go back to this: 52 percent of the country does not think the president is doing a good job. Fifty-two percent disapproves of him according to polling averages. The economy is at 13 to 16 percent unemployment. There's not a lot of confidence that it's going to get much better than that come November. He's running on the economy. He wants to run on the economy. You're telling me -- with 6200 people who showed up to red, red, red Oklahoma, Tulsa, when you were expecting 100,000 to show up, and you're telling me everything is fine?"

"Well, I'm telling you we've still got five months of work to do," Lotter confessed. He went on to say that he thinks the campaign will achieve great things.