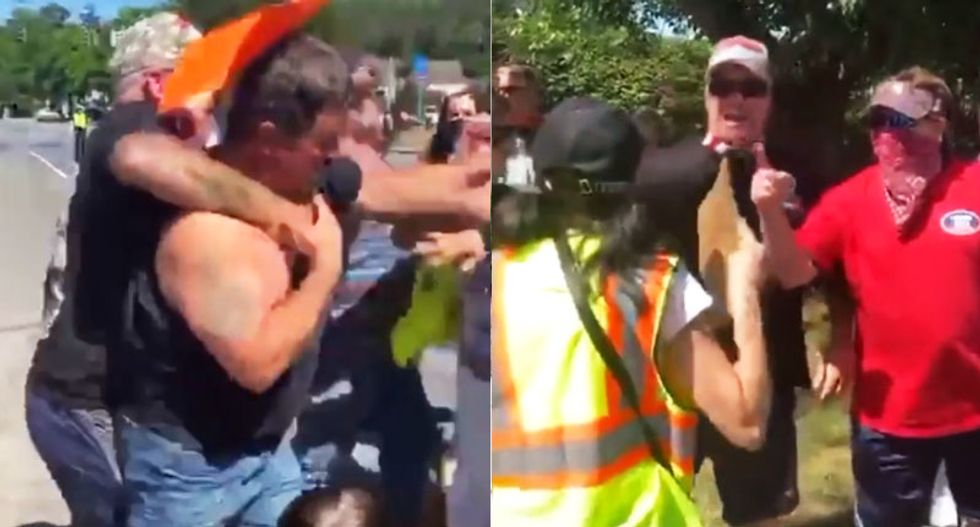 Anti-racism protests in New York's Hudson Valley have so far for the most part been peaceful, but all that changed on July 18 when Black Lives Matter protesters came head-to-head with a contingent of counter protesters.

BLM protesters were on one side and Blue Lives Matter protesters were on the other, sparking a confrontation that "appeared to be racial in nature rather than a difference of opinion toward law enforcement," according to the The Poughkeepsie Journal. Other reports say there were signs, flags, spitting, yelling and name calling — including the “N-word.”

"At one point, a man shouting 'all lives matter' at the passing group of Black Lives Matter protesters lunged at the group and several officers jumped in to separate the sides," The Poughkeepsie Journal reported.

The TriCorner News reports that a grown man hit a 12-year-old child, knocking her to the ground, kicking off a scuffle with the girl's mother. A woman named Margerite Pastor intervened, and was hit in the face while her attacker reportedly laughed.

“Pain-wise I’m alright,” she said. “I am more distraught about the child who was attacked. I just can’t believe it,” Pastor said.

“It was really rough. We were attacked, there was yelling, spitting, we were told to go home, and called the ‘N-word,’ coward and filth,” added local resident Tia Scott. “I’ll never forget the look of hatred that was in their eyes.”

The Dutchess County Sheriff’s Office announced Wednesday that an investigation into the incident is under way.

Watch video from the incident below: