50 dead in Japan floods as rescuers 'race against time' 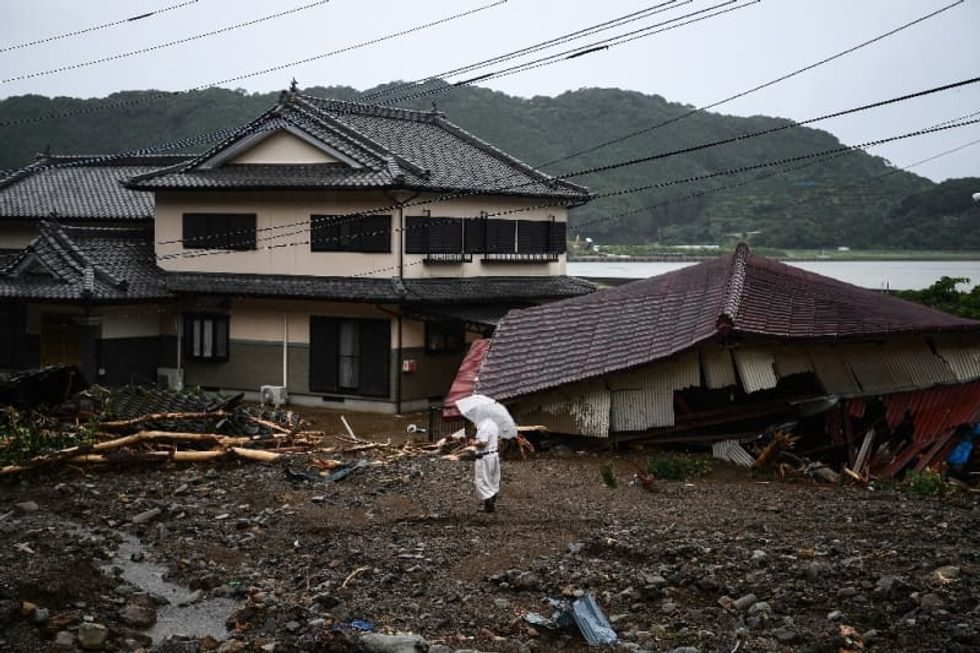 Emergency services in western Japan were "racing against time" Tuesday to rescue people stranded by devastating floods and landslides that have killed at least 50, as the country braced for more torrential downpours.

Television footage showed swollen rivers breaking their banks and sweeping away bridges while landslides destroyed roads and buried houses, complicating access for the 80,000 rescue personnel battling to save lives.

At least 50 deaths have been confirmed in the rains that began early Saturday, top government spokesman Yoshihide Suga said, but the toll is expected to rise, with four more feared dead and over a dozen reported missing.

He warned that more heavy rain was forecast over the next two days, saying: "Even a small amount of rainfall could cause a disaster. I would like people to be on full alert against landslides and floods."

In the hardest-hit region of Kumamoto, on the southwest tip of Japan, disaster management official Yutaro Hamasaki said: "We are racing against time."

"We have not set any deadline or time to end the operation, but we really need to speed up our search as time is running out. We won't give up to the end," Hamasaki told AFP.

At an elementary school in Omuta city, dozens of children and their teachers spent the night sheltering on the upper floor of the building after floodwater inundated the ground level.

"Shoe cupboards on the group floor were swept away and shoes were floating around," an 11-year-old girl told a local newspaper after rescuers arrived.

"Some children were sobbing because they were worried about not being able to get home and were afraid of the heavy rain."

Kentaro Oishi, who owns a rafting business in the hot springs resort of Hitoyoshi City, told AFP that emergency services drafted him in to rescue stranded locals.

"I have 20 years of rafting experience, but I never dreamed" of rowing the boat through the city, the veteran paddler told AFP.

"To tell you the truth, I was so scared at first when I saw the water levels rising so rapidly in the river."

Fourteen of the dead were wheelchair-bound residents of a nursing home unable to escape to higher ground as the waters rose.

A rescue worker who searched the facility told NHK: "The ground floor was filled with water and we couldn't get into it. Some people managed to evacuate to the first floor. I've never experienced anything like this in my life."

Further complicating evacuation efforts was the fear of spreading the coronavirus.

Japan has been relatively lightly affected by the pandemic, with just under 20,000 cases and fewer than 1,000 deaths.

But the need to maintain social distancing has reduced capacity at evacuation shelters.

In Yatsushiro city, authorities converted the local sports gymnasium into a shelter, with families separated off by cardboard walls to prevent the spread of the virus.

According to local media, some people were preferring to sleep in their cars rather than risk possible infection at a shelter.

The disaster has also compounded problems for businesses already hard hit by the pandemic.

"The damage was beyond our imagination. It's literally a bolt from the blue," said Yuji Hashimoto, who runs a tourism bureau in the hot-spring resort in Yatsushiro, one of the flood-hit cities in Kumamoto.

"The disaster is a double-whammy as our hot spring resort was struggling to weather the impact of coronavirus. We don't know what will happen to us next," he told AFP.

Japan is in the middle of its annual rainy season, which frequently unleashes deadly floods and landslides. Climate change has intensified the risks of heavy rains, because a warmer atmosphere holds more water.

In 2018, more than 200 people died in devastating floods in the same region of Japan.