'All lives matter': Church hangs 'no trespassing' sign above Black woman for sitting in the grass 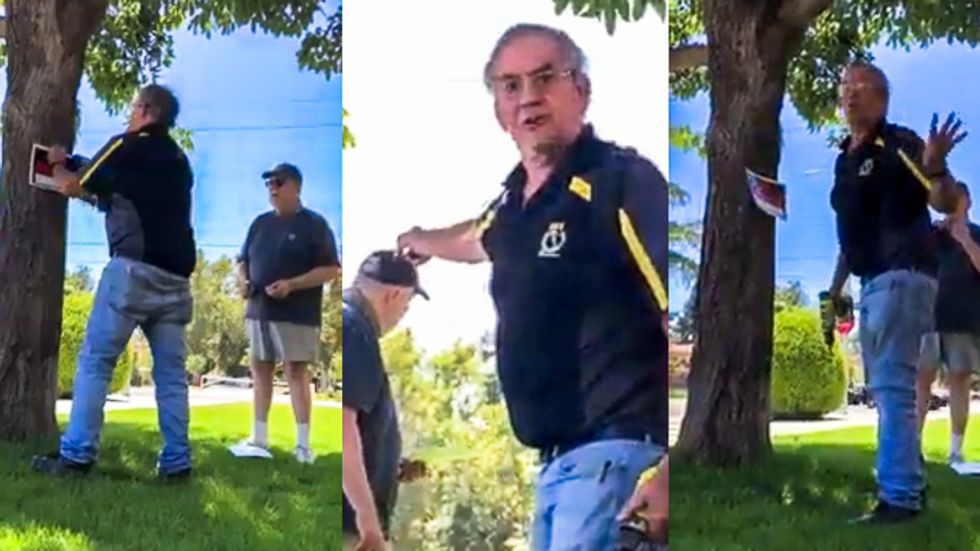 Officials at a California church were accused this week of harassing a Black woman who was sitting in the grass on the property.

"My friend Alex was sitting under a tree in the shade when this happened," the post explained. "This is deeply disturbing and contrary to Lutheran values and basic human decency."

A video shared by Chris Macke shows a man, who is presumably a Church official, hanging a "no trespassing" sign on a tree above where the woman is sitting.

"Why am I not welcome?" the woman asks.

"Because this is private property," the man replies.

"This church is not welcoming me?" the woman presses.

"No," the man insists. "It's not. We have a lot of problems with people here from the park vandalizing and we don't want anybody on the private property. You want to stay on the sidewalk? That's okay. The mayor says you can have all the sidewalk you want. But you can't be on the grass."

"Have I vandalized anything?" the woman wonders.

"You haven't," the man agrees before using a drill to attach the sign to the tree.

"Did you go buy that just now for me?" she remarks. "That's so unwelcoming."

"You know, we used to be real nice about it," he opines. "Not anymore. When people aren't nice, we're not nice."

"We have to treat everybody the same," the man continues. "All lives matter. I'm sorry, but I'm telling you that's what we have to do because we have to protect ourselves."

The man goes on to explain that the police won't remove people from the property without a "no trespassing" sign.

"So this is a precursor to you calling the cops?" the woman demands to know.

"This is it," the man admits. "They already did. And they said we can't do anything because there's no 'no trespassing' sign."

"So you're willing to call the cops for someone who is sitting on some grass," the woman complains, "when there are clear crimes they could be taking care of."

Before the video ends, a white woman accuses the Black woman of threatening her life.

"How am I threatening your life?" the woman sitting in the grass asks.

"Because you're arguing with us," the white woman insists.

Update: In a statement, St. Paul's First apologized and said that the volunteers who appeared in the video had requested to step down.

"The disrespect demonstrated by the individuals does not represent the attitude of St. Paul’s First," acting school principal Mr. Santiago Botero said in the statement. "I am personally offended by what I saw in the video and would like to apologize on behalf of St. Paul’s First. I will try to contact [the woman in the video] and [if] she would ever like to speak to me personally about what she experienced at St. Paul’s First, I would invite the opportunity to meet with her."