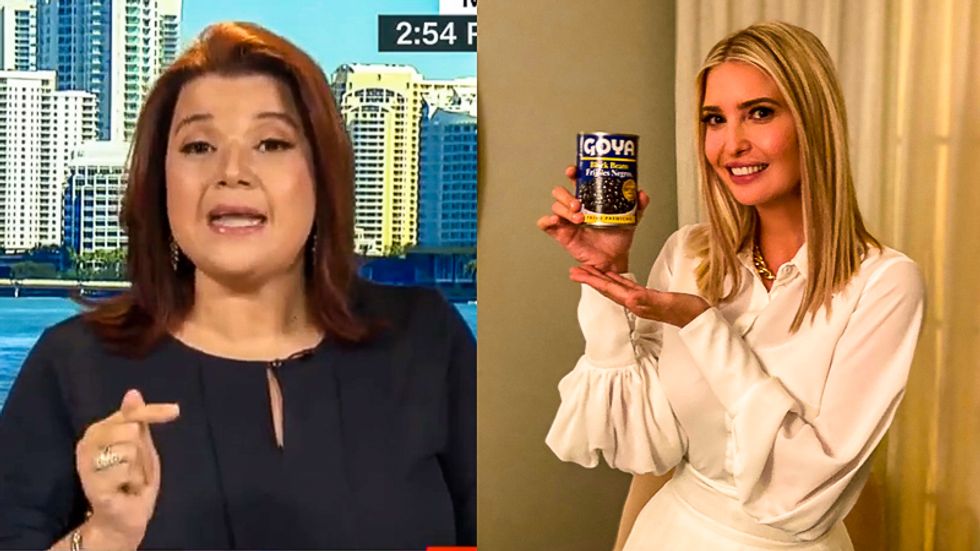 CNN contributor Ana Navarro on Wednesday blasted Ivanka Trump for allegedly breaking laws by using her position at the White House to endorse Goya, a maker of Latin foods whose CEO has expressed support for President Donald Trump.

Watchdogs have accused the president's daughter of violating guidelines from the Office of Government Ethics after she promoted the brand on Twitter.

"Here is the problem," Navarro explained during an appearance on CNN. "I believe the CEO of Goya has the right to express his political preference. I believe the Latino consumers, the people who consume beans have all the right to express themselves by boycotting, by supporting or not supporting -- except if you are a senior adviser at the White House, except if you are a member of the administration."

"People cannot use their government-paid jobs to help any sort of brand or any company," she said. "It is a law. She's broken ethics, she has broken regulations, she's broken a law by doing that."

"I don't know any Latin who would dress in white silk to cook a can of black beans," she explained. "That in itself makes no sense."

Navarro recommended that the president's daughter resign if she wants to promote brands.

"Do us all a favor and quit your job," the CNN contributor remarked. "Because you're not really effective at your job anyways."

"But if you are going to be taking up all thing Latin, if you're going to be supporting Latin food and Latin causes, it would be nice if they had the same passion for the men and women, the migrant workers who pick the vegatables that go in those cans," Navarro said.