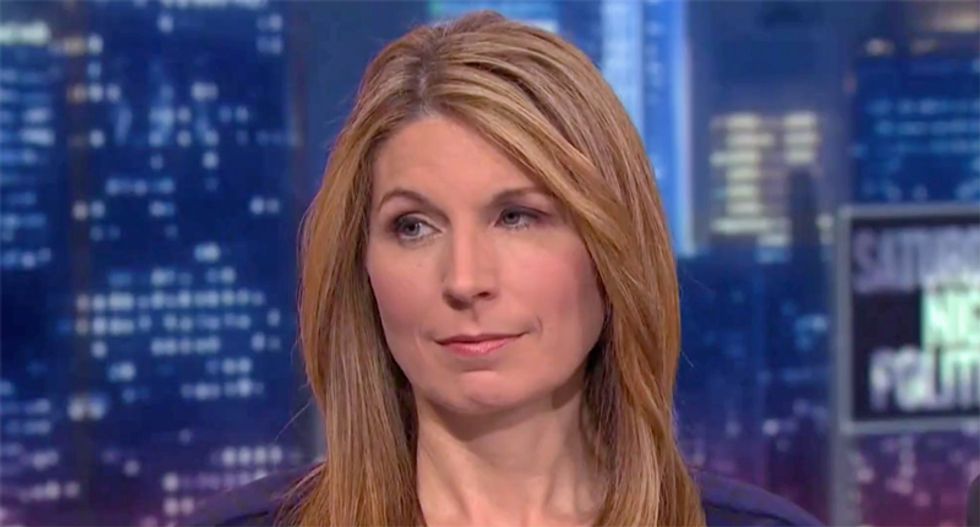 "The bottom is calling, and it wants to know if we're there yet," Wallace joked, noting she's stopped assuming we've reached rock-bottom in the Trump era. Speaking to her panel Thursday, Wallace equated Trump's cruelty mocking a disabled reporter to being similar to his cruelty, not caring about people fighting and dying from COVID-19 and sticking children in cages on the border after ripping them away from their parents.

"There's cruelty and a feeling of sticking your finger in an electric socket if you know anyone or love anyone that's been screened for dementia or Alzheimer's," Wallace said.

Former Rep. Donna Edwards (D-MD) said that every week shows Americans that there is no bottom to Trump's administration. She explained that Trump has no real empathy for people with the coronavirus just as he doesn't "appreciate the circumstance, the sad circumstance of millions of Americans who suffer from dementia and Alzheimer's in their years. He has no ability really to put himself into someone else's shoes."

"There is no example of a president at a high watermark that didn't succeed in holding this country as it grieves, as it struggles, as it suffers," said Wallace. "Donald Trump either can't do it or won't do it. Joe Biden is surging ahead of him in poll after poll after poll."

"He thinks he can win this campaign on a mano-a-mano fight over who has a higher test score," he continued. "It feels divorced from the moment when people are worried and scared, if not for their life, for their loved ones and jobs and kids going to school. You don't get the sense when the president is trying to adapt by returning to the press conferences that he understands this is a moment of crisis, and it's going to be a crisis long past Election Day. We, as voters, are used to seeing a certain set of ticks from a president. A certain set of acts, even feigned from a president to get through these times. He doesn't display those things."

Wallace asked Phil Rucker if there's any indication that someone is telling Trump behind the scenes that he needs to care about the dead Americans.

"No, nothing that I can report," said Rucker. "That's not to say he's not making that kind of contact. Perhaps he is, but he's probably not. If he were making those outreach calls, his spokespeople would be the first to alert the news media about it. And we have not heard about him doing that. When he makes public appearances, we rarely even hear him voice thoughts and empathy for people who are suffering. We've seen it a bit in these briefings he's been doing the last few days, but there was any number of public appearances earlier this summer where the president would come out and say next to nothing about the coronavirus. In fact, pretend like it wasn't happening."

Wallace read a New York Times report saying that Trump believes Democrats are using COVID-19 for political reasons, saying "watch on Nov. 4 everything will open up."

"I mean, this is a bitter, delusional, angry guy who I suppose he's saying on Nov. 4, everything will open up because he knows he's going to lose," Wallace said.