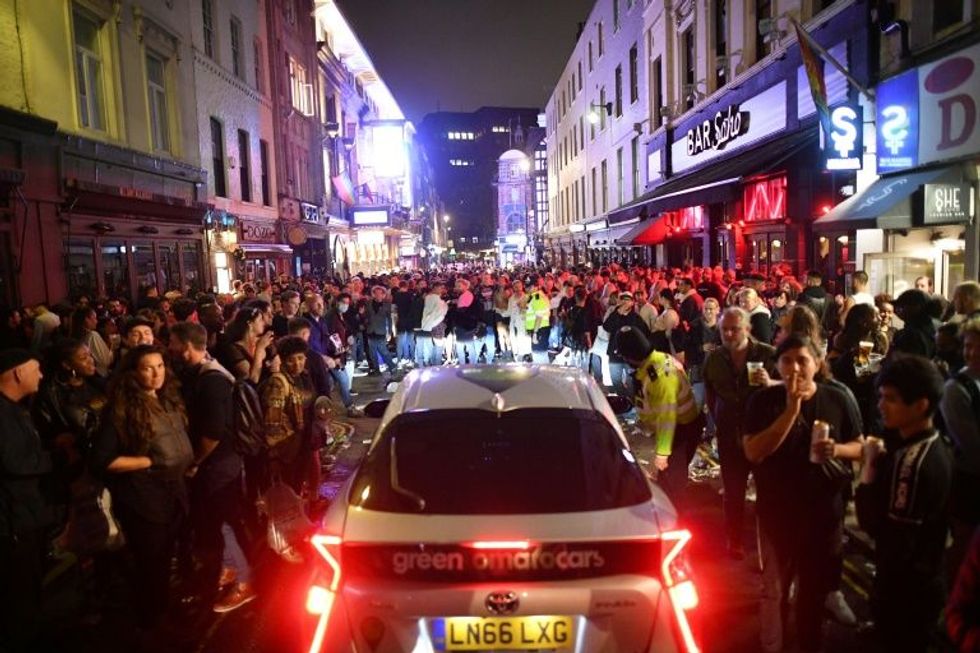 Drunken celebrations on English pub reopening night and US beach closures prompted a global rethink on Sunday of coronavirus measures during the summer holiday season.

Hopes of the sun making the new disease go away are fading as the United States racks up record daily infection numbers and quarantines return to parts of Europe.

Cases are also rising fast in India while Iran recorded its highest single death toll and Madagascar was forced to lock down its capital because of a new spike.

The latest batch of bad news is confronting governments with the pains of calibrating a response that is both safe and sufficient to get stalled economies going and mentally exhausted people out of their homes after months of lockdown.

Saturday presented the twin tests of England's pub culture resuming after a three-month hiatus and the United States marking its July 4 celebrations under the leadership of virus-weary President Donald Trump.

The head of the police federation for England and Wales said the sight of thousands of people thronging the streets of London's Soho nightlife district made it clear "that drunk people can't/won't socially distance".

"It's been manically busy in places."

Apter's comments put Prime Minister Boris Johnson's government on the defensive and his handling of the entire crisis under renewed scrutiny.

Health Secretary Matt Hancock insisted that "from what I've seen, although there's some pictures to the contrary, very, very largely people have acted responsibly".

Britain's infection numbers are falling and any new spike from the big night out could undermine Johnson's optimistic message of the worst being in the past.

His government has already been forced to impose a partial lockdown on the city of Leicester and is watching infection rates trending at uncomfortably high levels in London and other parts of the UK.

The mood is Spain is even grimmer after two separate outbreaks saw 200,000 people put under lockdown in the northeastern Catalonia region on Saturday and another 70,000 in the northwestern Galicia region on Sunday.

Spaniards endured one of the world's toughest lockdowns in which people were confined to their homes unless they could provide the police with a valid excuse for stepping out.

Very similar measures in Italy managed to contain that outbreak to the richer northern regions without a second rebound.

The virus's unpredictable nature means it is popping up without warning in regions that appear to be doing the same things as its relatively untouched neighbours.

Greece was forced Sunday to close its frontier to Serbian nationals after that Balkan country declared a health emergency in the capital Belgrade.

And the entire European Union and Britain are refusing entry to Americans because its infection rates are still climbing in some big states.

The US accounts for a quarter of the world's 530,000 official virus deaths and another quarter of its 11.3 million registered cases.

The spiralling numbers cast a pall over Independence Day celebrations that are usually accompanied by huge crowds coming out to beaches and parks for big fireworks displays.

Many of the traditional parades were cancelled and the boisterous backyard barbecues scaled down on both coasts and in Washington.

The National Mall in the US capital stood deserted and bars in Texas and Michigan had to close on what should have otherwise been one of their busiest weekends of the year.

He once again blamed China for causing the pandemic and promised that US "scientific brilliance" will find a cure or a vaccine "long before the end of the year".

Yet no immediate medical solution is in sight and more and more states are erring on the side of caution and shutting things down once again.

New York's past experience of being the US epicentre of the outbreak saw some families approach its freshly reopened public beaches with caution.

"I'll have my mask on as soon as we leave the beach, so we came prepared," Mark Ruiz said while walking the tourist-friendly Coney Island beach with his wife and two children.

"I just can't stay home on the Fourth of July, I gotta take my kids out. We can't be in a bubble all summer."

The world is also gaining experience voting during the pandemic -- with sporadic success.

A series of bundled US state elections were followed by a vote in Poland that was criticised for the ruling party using public gathering restrictions to seize control of the campaign.

A presidential vote in the Dominican Republic and a general election in Croatia on Sunday will test democracy in the times of the virus in new parts of the world.

To the victor in either election go the spoils of an economy in ruins and no clear end to the health crisis in sight.

"Whoever wins will face major economic problems to deal with in autumn," 49-year-old voter Igor Ivic said in the Croatian capital Zagreb.

Russia's own vote on changes to the constitution that can theoretically keep Vladimir Putin in power until 2036 had to be held over a week-long period to drive up turnout.

But problems were more immediate in places such as South Africa as fresh outbreaks raged.

Dozens of military medics were deployed to East Cape province after South Africa recorded a record 10,800 infections in a day.

"The province is not coping," defence force spokesman Thabo Sello told AFP. "The situation in the Eastern Cape is really bad."