'Christian Case for Trump' author ripped for theological malpractice: 'Jesus was not white' 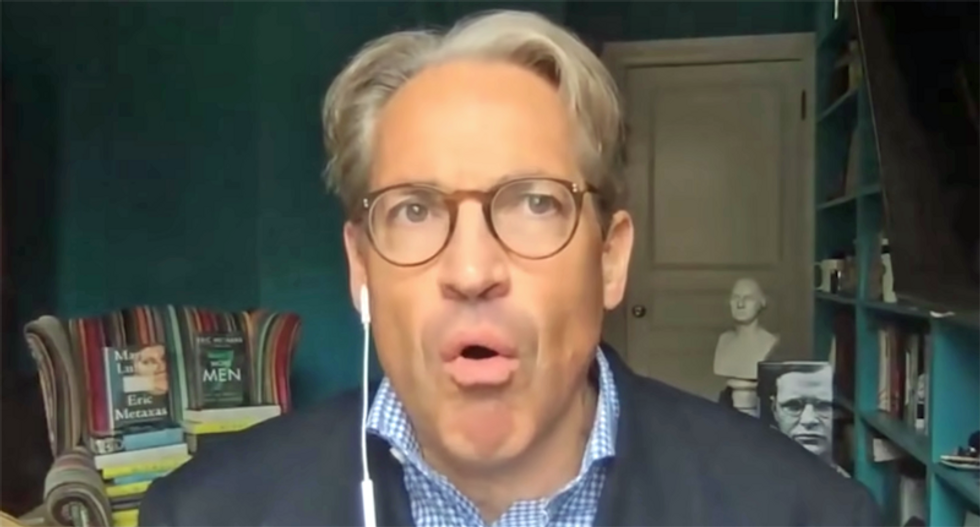 The host of the Eric Metaxas Radio Show (screengrab)

One of President Donald Trump's major religious supporters was harshly mocked on Monday for arguing, "Jesus was white."

The host of the "Eric Metaxas Radio Show" wrote an op-ed for The Wall Street Journal in January titled, "The Christian Case for Trump."

"For those of us alive to this strange moment in history, arguments that this president’s inchoate moral failings somehow require his removal from office seem not only disproportionate, but preposterous," Metaxas wrote. "Since most evangelicals concur with Abraham Lincoln in seeing America as 'the last best hope of earth,' it should hardly be discomfiting or shocking that they would rally behind a president with the fortitude to defend that vision of America."

Despite the huge death toll due to Trump's bungled response to the coronavirus pandemic, on Thursday he was saying he wanted Trump to deploy troops to New York City.

Walking in front of Trump Tower here in Manhattan I spotted this man in a hardhat holding up these signs. There are… https://t.co/CfKhzyhO6O
— Eric Metaxas (@Eric Metaxas) 1595524584.0

On Monday, Metaxas tweeted that, "Jesus was white."

Here's some of what people were saying about his claim:

@ericmetaxas As has been amply covered, Jesus wasn’t exactly white, nor was that really an identity at the time. He… https://t.co/U6baKrBBB4
— Susan Griffith (@Susan Griffith) 1595888775.0

@ericmetaxas Ok, entirely aside from the geographical and ethnic confusion you are displaying: Kinda the most imp… https://t.co/u9PKQY0eXr
— Lura (@Lura) 1595890480.0

Fact Check: Jesus was NOT white. In fact, I wrote an entire @TheAtlantic article on this for anyone who has spent a… https://t.co/iPzbtz9ttz
— Jonathan Merritt (@Jonathan Merritt) 1595886741.0

This is what you call theological malpractice. When Jesus lived, White people didn’t exist. Why? Because “White… https://t.co/seoVRbIykM
— Rich Villodas (@Rich Villodas) 1595897835.0