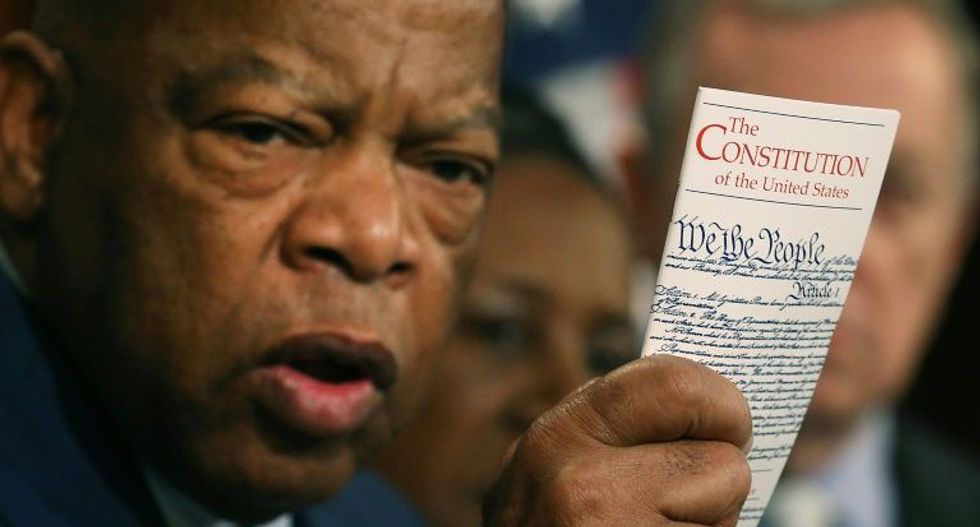 In this file photo taken on March 02, 2016, congressman John Lewis holds up a copy of the US Constitution during a news conference on Capitol Hill with Senate Democrats and members of the Congressional Black Caucus (AFP Photo/MARK WILSON)

Civil rights leader and congressman John Lewis was remembered Saturday as a fighter for "the least of us," as a memorial service in Alabama kicked off days of tributes that will culminate with the high honor of lying in state in the rotunda of the US Capitol.

At a service Saturday in an arena at Troy University in Alabama, the state of his birth, five siblings and a great-nephew paid tribute to Lewis as a loving and fearless family man, committed even at a young age to justice and equality.

"He'd gravitate toward the least of us," said brother Henry "Grant" Lewis. "He worked a lifetime to help others."

Sister Ethel Mae Tyner recalled the days long ago when family members worked together in cotton fields near Troy and dark clouds would pass over. Young John Lewis hated storms but would not budge.

"He would start singing -- and preaching. He always was a fighter," she said.

The siblings reminded the crowd of their brother's famous injunction to make "good trouble" -- ruffling feathers when it was for a righteous cause.

In keeping with COVID-19 precautions, masks were required and the number of visitors to the arena was limited to 800 -- a far cry from pre-coronavirus times when a memorial for an icon like Lewis would have drawn thousands from across the country.

While attending segregated schools in Alabama, Lewis was inspired by the peaceful protests of rights leaders like Martin Luther King Jr and he eventually rose to join their ranks and become a towering figure in his own right.

Since 1987 he had represented a Georgia district in Congress.

After the ceremony in Troy, commemorations were to move to Brown Chapel AME Church in Selma, Alabama for a private remembrance followed by a public viewing -- again with coronavirus precautions -- starting at 8:00 pm (0000 GMT Sunday).

On Sunday at 10:00 am, a processional will escort Lewis's casket from Brown Chapel to the Edmund Pettus Bridge.

It was there that Lewis, during a landmark 1965 civil rights march that came to be known as "Bloody Sunday," had his skull fractured by a state trooper who beat him to the ground with a nightstick.

On Sunday, in a twist of history, the procession will be led by a state trooper.

Supporters hope the bridge will someday bear Lewis's name, not that of Pettus, a former Confederate general.

On Sunday afternoon, events will move to the Alabama city of Montgomery, where the public has been encouraged to line sidewalks as the processional travels to the state capitol.

The casket will then be moved to the top of the steps at the Capitol's East Front for public viewing Monday evening and all day Tuesday, according to The Washington Post. Masks and social distancing will be required.

Out of concern for the pandemic, the Lewis family has asked that people not travel from across the country to pay respects, and instead post virtual tributes.

The week of solemn commemorations will end on Thursday in Atlanta, Georgia, where Lewis will be laid to rest after a private service in the Ebenezer Baptist Church, where Martin Luther King once preached.