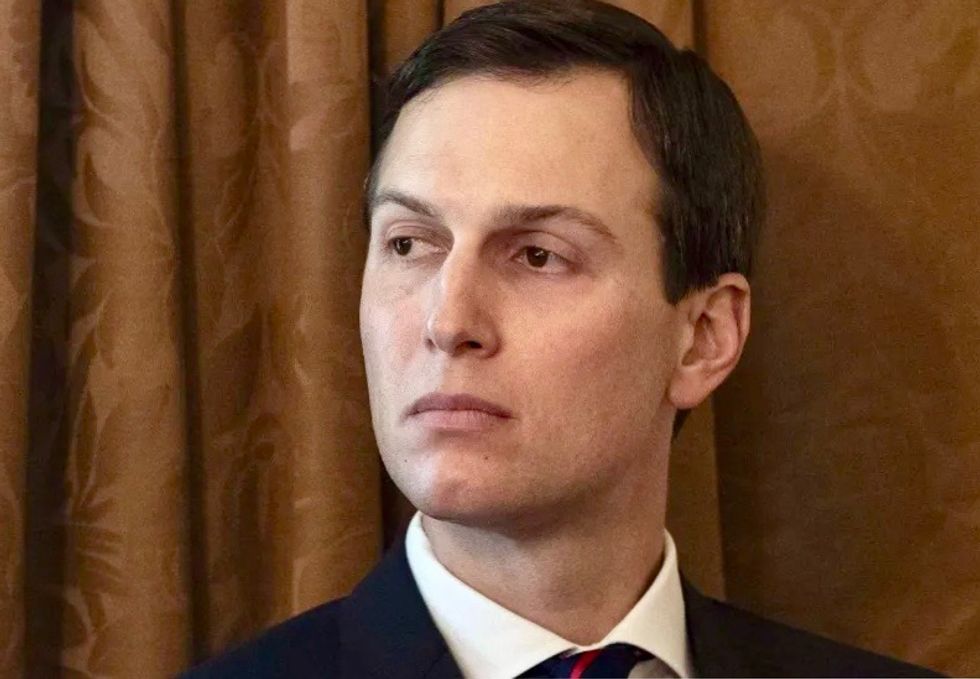 "Holy hell. Jared Kushner reportedly abandoned a national testing plan because it was *politically advantageous* to sit back and let blue states be eviscerated by the virus."

In the wake of devastating new reporting by Vanity Fair, a chorus of voices Friday called for the immediate resignation of Jared Kushner, a top White House advisor and the son-in-law of President Donald Trump, for disastrous—and deadly—failures by the administration that appear to have put the political desires of the president above the public health needs of the American people.

"No, losing the election doesn't qualify as accountability. Over 100,000 Americans are dead because of these people's incompetence and viciousness. I know the idea of prosecuting the previous administration makes some uncomfortable. Time to start getting over that."

—Matt Duss, foreign policy advisor for Sen. Bernie Sanders The Vanity Fair article takes an exhaustive look at decisions made and actions taken by a secretive task force led by Kushner that was charged with implementing an "aggressive, coordinated national COVID-19 response"—including a federal testing regime that would help stem the spread of the virus. What the investigation uncovered, according to reporter Katherine Eban, was an ultimately "aborted plan" for a far-reaching national testing strategy and a deliberative process that "began not with public health experts but with bankers and billionaires."

While the plan itself devised by the team Kushner put together was characterized as "imperfect" but "a starting point," the most shocking revelations have to do with why the strategy, which members of the unit believed would head straight to Trump's desk and then be rolled out nationwide with large fanfare in early April, suddenly seemed to disappear—like "poof into thin air," said one participant in the effort.

Most troubling of all, perhaps, was a sentiment the expert said a member of Kushner's team expressed: that because the virus had hit blue states hardest, a national plan was unnecessary and would not make sense politically. "The political folks believed that because it was going to be relegated to Democratic states, that they could blame those governors, and that would be an effective political strategy," said the expert.

That logic may have swayed Kushner. "It was very clear that Jared was ultimately the decision maker as to what [plan] was going to come out," the expert said.

On April 27, Trump stepped to a podium in the Rose Garden, flanked by members of his coronavirus task force and leaders of America’s big commercial testing laboratories, Quest Diagnostics and LabCorp, and finally announced a testing plan: It bore almost no resemblance to the one that had been forged in late March, and shifted the problem of diagnostic testing almost entirely to individual states.

While the veracity of such claims cannot be verified—and Kushner refused to answer a detailed set of questions or be interviewed by Vanity Fair—the implications of such a decision speak for themselves and drew immediate outrage and a demand for accountability.

This is a total outrage. Jared Kushner commissioned and then abandoned a rational plan for dealing with #COVID19 be… https://t.co/yCAQzYsBFw
— Claire Finkelstein (@Claire Finkelstein)1596199020.0

"Imagine the administration had intel on an imminent terrorist attack that would kill over 100,000 people, and chose to do nothing because it was politically easier," tweeted Matt Duss, foreign policy advisor for Sen. Bernie Sanders (I-Vt.), on his personal account. "That's what we have here. We need to be talking about accountability. For all of it."

"So the White House made the explicit decision that it was a better political call to let people die in the blue states and blame the governors than try to fix the testing situation," responded Josh Marshall of Talking Points Memo.

Wajahat Ali, an op-ed contributor to the New York Times, indicated the seriousness of these accusations against Kushner should not be ignored.

"Jared Kushner has blood on his hands," Ali stated. "And we should talk about this today."

According to Duss, simply voting Trump out of office in November would not count as holding administration officials responsible for this kind of behavior.

"No, losing the election doesn't qualify as accountability," Duss said. "Over 100,000 Americans are dead because of these people's incompetence and viciousness. I know the idea of prosecuting the previous administration makes some uncomfortable. Time to start getting over that."