'Existential threat to our democracy': Trump refuses to commit to accepting 2020 election results 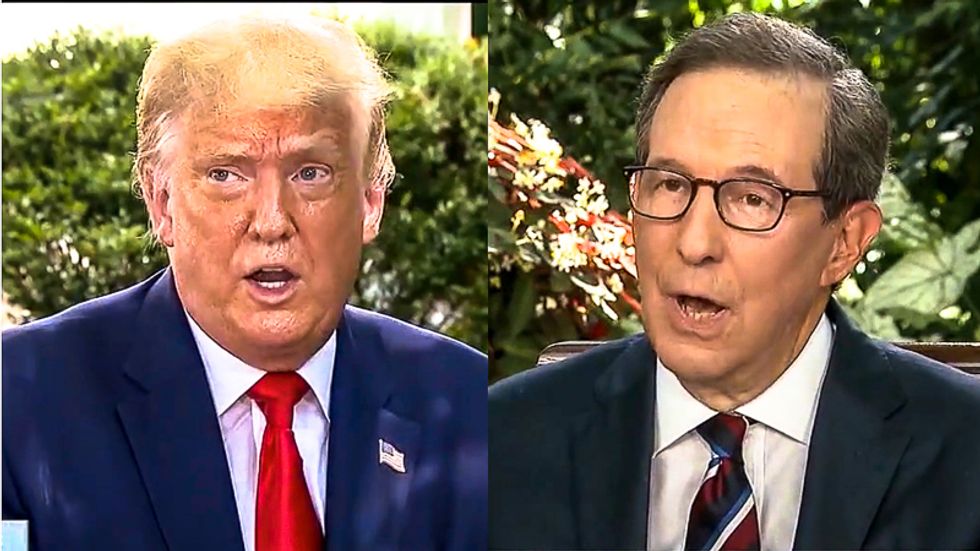 "A dangerous affront to our democratic system and a slide toward totalitarianism. We cannot take this lightly."

In a Fox News interview that aired Sunday, President Donald Trump refused to commit to accepting the results of the 2020 presidential election and baselessly claimed mail-in voting is going to "rig" the contest—remarks one advocacy group condemned as an "insidious" attack on democracy.

"I have to see," Trump said when asked by Fox News host Chris Wallace whether he intends to accept the election results. "No, I'm not gonna just say yes. I'm not gonna say it, and I didn't last time either."

Sean Eldridge, founder and president of Stand Up America, said in a statement that Trump's comments show "he is an existential threat to our democracy and has no respect for the rule of law."

"For five years, Trump has sought to undermine our elections again and again—from soliciting foreign interference to making baseless claims about voter fraud to lying about the results of the 2016 election," said Eldridge. "Today's comments are an escalation in these attacks on our democracy and show the insidious ways in which Trump is working to sow doubt about the outcome of this election before votes are even cast."

"The American people must be prepared to mobilize if Trump refuses to concede," Eldridge added.

Noah Bookbinder, executive director of Citizens for Responsibility and Ethics in Washington, tweeted that "it was not okay four years ago when Donald Trump said he might not accept the results of the election."

"When he says that now as president, it is a dangerous affront to our democratic system and a slide toward totalitarianism," Bookbinder wrote. "We cannot take this lightly."

Last month, Stand Up America and Indivisible launched a grassroots campaign to prepare for the possibility of Trump rejecting the election results and refusing to leave office if he loses in November. The campaign is aiming to "build a network of millions of Americans who pledge to take action should Trump refuse to accept the results or if he attempts to declare victory while the actual outcome remains unclear."

Ahead of the 2016 presidential contest, Trump told his supporters that he "will totally accept the results of this great and historic presidential election... if I win." Since entering the White House in 2017, Trump has repeatedly floated the idea of remaining in office for more than eight years.

"We have no reason to believe he will leave willingly after losing reelection," said Ezra Levin, co-founder and co-executive director of Indivisible. "Preparing for the possibility of Trump refusing to concede isn't just reasonable, it's the responsible thing to do."