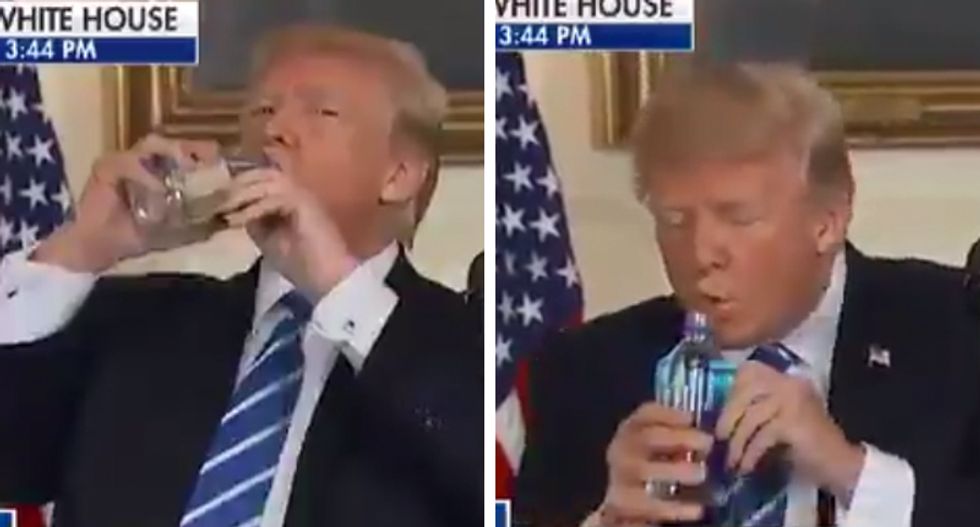 President Donald Trump bragged about taking a cognitive test that he said the doctors were "surprised" that he passed. The reality, however, is that the "test" was hardly a representation of what people with suspected dementia or Alzheimer's disease take. Trump's father had Alzheimer's, though studies have shown that if your mother has the disease you are more likely to develop it than if your father suffered from it.

Fox News host Chris Wallace questioned Trump on the test, saying that one question even asked him to identify an elephant, which Trump didn't contradict. That's not a dementia test.

"It is a 10-minute screening exam meant to highlight possible problems with thinking and memory," said the Times.

“The way our president is having a conversation about mental health is not helpful,” said Dr. Jason Karlawish, who serves as a dementia researcher at the University of Pennsylvania’s Perelman School of Medicine.

This reporter endured the early stages of Alzheimer's disease with her grandfather, including the testing stage, which required a full day of cognitive tests that went far beyond looking at a picture of an elephant. The test lists a number of things for the patient to remember and then asks other questions before returning to the things they were supposed to remember. It aims to test the short-term memory, which often fails first in dementia.

“You would think [Trump] would understand clearly what the test result was and why the test was done,” Dr. Karlawish said, “and not turn it into a competition about mental health.”

The Montreal Cognitive Assessment, or MOCA, has about 30 questions that the Times says is "meant to briefly assess memory."

"To test memory, for example, the examiner reads five words at a rate of one per second and asks the subject to repeat them immediately and then again after some time has passed," the report described. "To assess attention and concentration, subjects are read a list of five digits and asked to repeat them in the order they were provided and then in reverse order. The subjects also are asked to count backward from 100 in increments of 7."

People are then asked to draw a clock showing 11:10. The top score is 30 and normal is considered 26 to 30. Trump didn't reveal what his score was.

Most doctors don't like such tests, said the Times, because they're nothing like a cancer screening or an X-Ray. They're only part of the equation in mental functioning, where more extensive examinations are necessary as well as interviews with loved ones who can relay what they have observed over time. In the case of this reporter's grandfather, our family was asked about observations of forgetfulness, inability to follow conversations, driving problems, diet, as well as family history. There was also an MRI done to observe the status of the brain. In cases of Alzheimer's and forms of dementia, gaps form between the folds in the brain as it is almost eaten away. A PET scan can also measure brain cell activity using glucose rates.

Trump getting a "perfect score" on the test isn't exactly reassuring as the test is so easy that only an advanced case of dementia would be discovered. The questions about Trump are about the early stages of dementia, which may not be caught by that test until it's too late for America. "Usually it’s the trend over time that suggests a problem," the report also said.

"It’s also important for the physician to talk to someone who knows the patient well, because people who are slipping cognitively do not always recognize it," the Times explained.

“Lack of awareness or insight can be part of the package” of dementia, the Times quoted Dr. Ronald Petersen, director of the Alzheimer’s Disease Research Center at the Mayo Clinic.

Trump has challenged Biden to a test, which he seems to think was enough of a challenge that Biden wouldn't pass. It's clear that Biden's cognitive ability is far beyond Trump's, simply by remembering things Trump struggles to. While people have questioned Trump's ability to walk down a ramp or stairs and drink water with one hand, there's much more to it.