Extremist Proud Boys have been trying to ally themselves with Philly cops — and showed up at a local police event: report 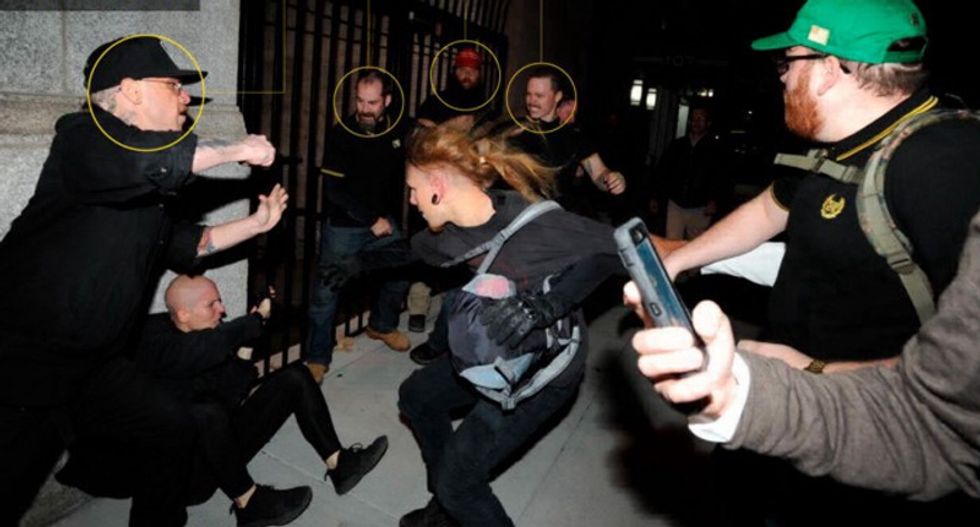 Philadelphia is a Democrat-dominated city with a decidedly left-of-center district attorney (Larry Krasner, an ally of Sen. Bernie Sanders) and Black female police commissioner (former Portland, Oregon Police Chief Danielle Outlaw) who was quick to speak out about the death of George Floyd and stress that she encouraged nonviolent protests. But it’s also the city where the infamous Frank Rizzo, who was often accused of police overreach, once served as police commissioner and later, mayor. The far right doesn’t have a lot of influence in Philly, yet in a July 16 article for the Daily Beast, reporter Kelly Weill discusses the efforts of extremist Proud Boys to ally themselves with Philly police officers.

“When the president of Philadelphia’s police union disavowed a far-right group whose members were photographed at a union party this weekend,” Weill reports, “it was at least the third time in recent weeks that local cops had been accused of canoodling with violent groups on the fringe. Members of the Proud Boys, an ultra-nationalist group that frequently mingles with white supremacists, were hard to miss when they showed up for a party at the Philadelphia Fraternal Order of Police headquarters Thursday night, (July 9).”

Weill notes that according to the Philadelphia Inquirer, around ten members of the Proud Boys showed up at that FOP event and chanted “all lives matters” at protesters. Philadelphia police union president John McNesby, however, spoke out against the extremist group.

In an official statement, McNesby wrote, “We have recently been informed that members of the Proud Boys were present outside the FOP headquarters this week following a visit by the vice president (Mike Pence). If we were aware of their presence, we would have immediately escorted them off our property. At no time were these individuals allowed inside of our building. Philadelphia police officers, FOP leadership and members condemn their hateful and discriminatory speech in any form.”

But Weill reports that “even the Proud Boys called elements of McNesby’s statement into question.”

According to Weill, “In a public chat channel, the group posted a picture of what appeared to be the bar inside the FOP headquarters. On Twitter, the group claimed to have spent $1000 at the headquarters that night.”

Steven Windisch, an assistant professor who focuses on criminal justice at Philly’s Temple University, told the Beast that the Proud Boys’ efforts to ally themselves with police officers “serve two purposes. One, it’s a form of recruitment — ‘let’s get into these institutions, get buddy-buddy with them, and maybe we can recruit them.’ Two, it’s also a product of their identity. The Proud Boys, in particular, see themselves as a kind of security force for Republican elites. There’s an unofficial brotherhood that I think they project onto law enforcement that they’re one and the same, fighting the same battle.”