Florida Conservative: 'Beyoncé is not even African-American' and song 'Formation' is a secret code 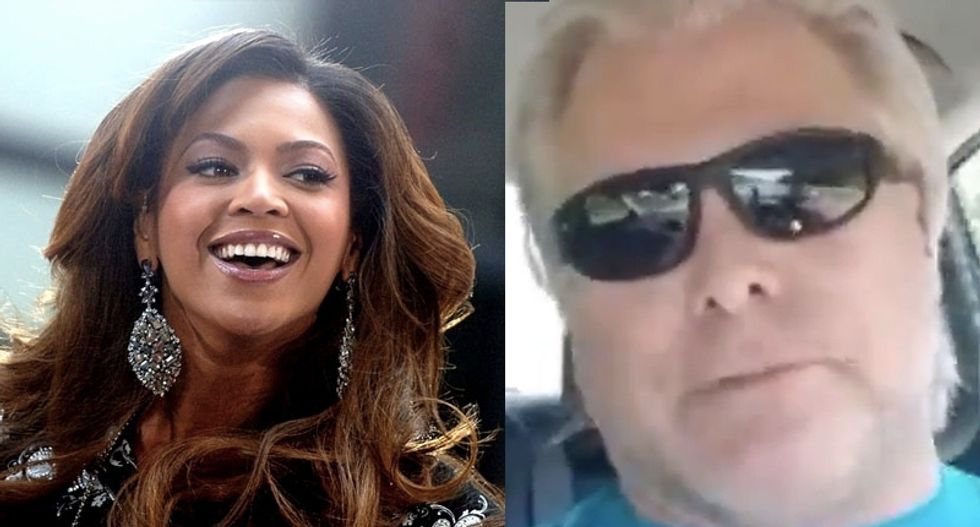 In a bizarre Twitter rant, conservative congressional candidate K.W. Miller decided that poet, popstar and humanitarian Beyoncé is no longer an African-American. He has decided that she is Italian instead.

"Beyoncé is not even African American. She is faking this for exposure. Her real name is Ann Marie Lastrassi. She is Italian. This is all part of the Soros Deep State agenda for the Black Lives Matter movement. BEYONCÉ YOU ARE ON NOTICE!" he tweeted in an Independence Day thread.

"You all do know that Beyoncé’s song 'Formation' was a secret coded message to the globalists I certainly hope?" he continued. "The song clearly admitted that she was demonic and that she worshipped in the Satanist churches located in Alabama & Louisiana. She keeps Satanist symbols in her bag. In the Satanist 'Formation' song Beyonce shouts out a 'Black Bill Gates in the making'. Consequently, in 2020 we see Black Lives Matter terrorizing the country at the same time as Bill Gates pushes a COVID vaccination. She was getting the ladies in formation 4 years ago. Why?"

"Looking more into Beyoncé’s coded globalist messages. Who is 'Becky With The Good Hair' who she encourages people to call while apologizing? Oh.... a Soros operative? Interesting. All goes through London."

According to the information that came out when the album "Lamonade" did, Beyoncé's "Becky with the good hair," was the revelation that Jay-Z had an affair and that was the "Becky," a name sometimes used as an insult. Jay-Z admitted to it and apologized publicly in his 2017 album "4:44."

Somehow this indicates the couple is part of the Illuminati, according to conservative conspiracy theories.

It's unclear how Miller decided that the pop-icon is Italian since Beyoncé was born in Houston, Texas and her mother Tina Knowles was born in Galveston, Texas. Mrs. Knowles' mother Agnéz Deréon and father Lumis Albert Beyincé were both from Louisiana. Deréon was the inspiration behind the House of Deréon, the ready-to-wear fashion line that Beyoncé and her mom founded.

The conspiracy theories seemed to have originated from Q-Anon, which invents various pieces of fake news that ultimately makes believers look foolish.

Miller went on to allege that "Patti LaBelle is another Illuminati globalist puppet."