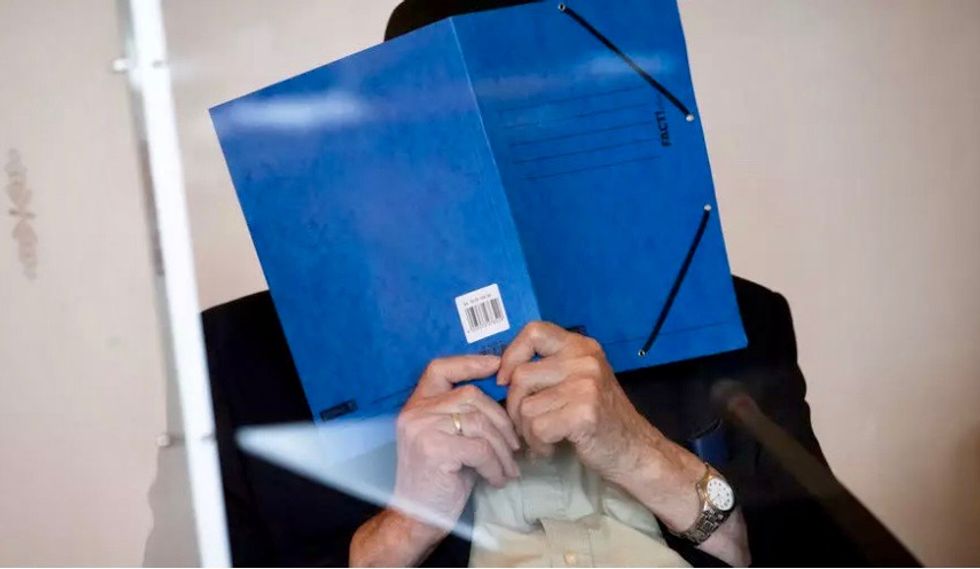 Bruno Dey, a former SS-watchman at the Stutthof concentration camp and seen hiding his face in the courtroom at a hearing in June, denies guilt Christian Charisius POOL/AFP/File

The prosecution's closing arguments will be heard on Monday in the trial of a 93-year-old former Nazi concentration camp guard for complicity in the murder of more than 5,000 people during World War II.

In what could be one of the last such cases of surviving Nazi guards, Bruno Dey stands accused of complicity in the murder of 5,230 people when he worked at the Stutthof camp near what was then Danzig, now Gdansk in Poland.

Dey, who has appeared in court in a wheelchair, denies bearing any guilt for what happened at the camp.

His defence has insisted that he did not join the SS voluntarily before serving at the camp from August 1944 to April 1945, ending up assigned there because a heart condition excluded him from frontline service.

But prosecutors argue that his involvement was crucial to the killings, as his time in the SS coincided with the "Final Solution" order to systematically exterminate Jews through gassing, starvation or denial of medical care.

Dey is standing trial at a juvenile court because he was aged between 17 and 18 at the time.

During his testimony in May, Dey told the court that he wanted to forget his time at the camp.

"I don't want to keep going over the past," he told the Hamburg tribunal.

Judge Anna Meier-Goering had asked whether Dey had spoken to his children and grandchildren about the time he stood guard at Stutthof.

"I don't bear any guilt for what happened back then," Dey said. "I didn't contribute anything to it, other than standing guard. But I was forced to do it, it was an order."

Dey acknowledged last year that he had been aware of the camp's gas chambers and admitted seeing "emaciated figures, people who had suffered", but insisted he was not guilty.

The Nazis set up the Stutthof camp in 1939, initially using it to detain Polish political prisoners.

Dey, who now lives in Hamburg, became a baker after the war.

Married with two daughters, he supplemented his income by working as a truck driver, before later taking on a job in building maintenance.

He came into prosecutors' sights after a landmark 2011 ruling against former Sobibor camp guard John Demjanjuk on the basis that he was part of the Nazi killing machine.

Since then, Germany has been racing to put on trial surviving SS personnel on those grounds rather than for murders or atrocities directly linked to the individual accused.

Ukrainian-American Demjanjuk was convicted of being an accessory to the murder of nearly 30,000 Jews at the Sobibor death camp. He died while his appeal was pending.

The court ruled that as a guard at the camp, he was automatically implicated in killings carried out there at the time.

The case set a new legal precedent and prompted several further convictions of Nazi officers, including that of the "bookkeeper of Auschwitz" Oscar Groening.

He died aged 96 before he could be jailed.