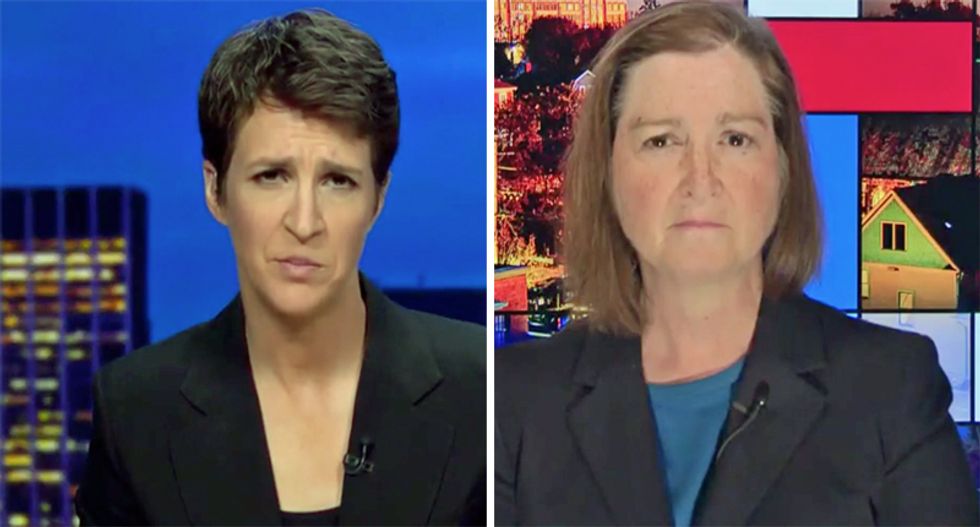 MSNBC's Rachel Maddow welcomed former U.S. attorney Barbara McQuade to "the Friday night horror show" to address a situation she said, "is as bad as it looks."

"You know, there are times when I try to be the voice of reason and point out other sides of an issue," said McQuade. "But this is as bad as it looks. No. 1, we've got William Barr, who is greasing the wheels in the key U.S. Attorney's offices that have jurisdiction over the activities of President Trump. But even though, you know, maybe we should have seen this coming, and there have been all kinds of hints that it's coming, I feel no more disgusted than I, otherwise, would be that Roger Stone has seen his sentence commuted. This is a man who obstructed justice, lied to congress, threatened a witness [and his dog], and the purpose of that was to protect President Trump. You know, this isn't President Trump's rewarding Stone for being a loyal friend. This is President Trump protecting President Trump. And I think it is a terrible attack on the rule of law. So, if anything, you have not painted a bleak enough picture."

However, the one saving grace came from McQuade, who said that impeachment should still be on the table for President Donald Trump, even if he loses in 2020.

"Well, as we have learned through the Mueller investigation, the Department of Justice will not indict a sitting president," said McQuade. "Whether the law, ultimately, permits it or not, that is the policy of the Department of Justice. So, he's not going to be charged with a crime. Though, I think one could make an argument that this is bribery, pure, and simple. A quid pro quo. An exchange of a thing of value in exchange for an official act. I think you could frame it that way. So, perhaps, Donald Trump could be charged with a crime after he leaves office. The statute of limitations for bribery is five years."

Then she dropped a truth-bomb.

"The other remedy, as you mentioned, is impeachment.  As we have seen, even if the House were to impeach, I don't think that the Senate has demonstrated an appetite for conviction," McQuade continued. "Although, Rachel, here is a theory: even if Trump should lose re-election in November, there could be value in impeaching him because the remedy for impeachment is not simply removal from office, but it is to bar someone from seeking office in the future. And if President Trump were to decide to run for president in 2024, if he were impeached, he could also be barred from holding office in the future. So there is a little bit of ray of sunshine in your otherwise dark day."

See the full explainer below: