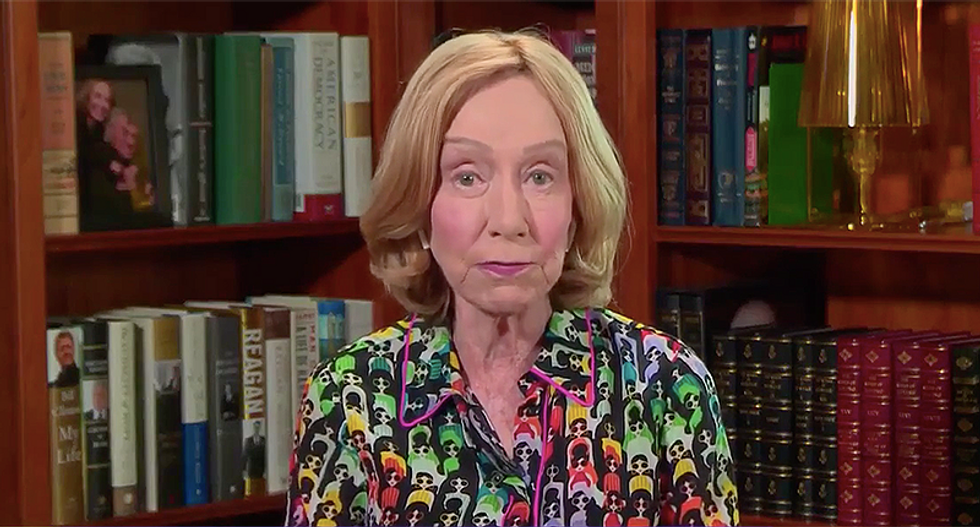 Presidential historian Doris Kearns Goodwin revealed a crucial task all presidents must accomplish to get reelected, particularly in a time of crisis.

Speaking to MSNBC's Kasie Hunt on Sunday, Kearns Goodwin explained that the country faces several major issues, and most Americans are searching for a way to move forward together.

"In some ways, the triple crises we're facing between the pandemic and economic fallout and search for racial justice is presenting a leader who we would hope would be there to have the ability and the the skills to mobilize all the the national resources to provide national direction and to bring the country together," she said. "I mean, in those other times of crisis, when I think about the Depression and World War II, what mattered and the reason it worked was that FDR understood that he had to do action, he had to move."

She explained that former President Herbert Hoover couldn't change his belief that the federal government shouldn't be involved, so when the country fell into an even deeper depression, he didn't come to people's aid.

"Every now and then, Hoover would say there is an uptick in the economy and stock market. We'll be all right," she recalled. "To deny the realities of the moment when you're a leader in crisis is one of the real problems because the ground will catch up with you. And then what FDR does, he's a governor in New York, and it's left to the governors to take action as it has here, as well and he starts the first unemployment insurance. We never had that before. He starts public works jobs. He takes responsibility for dealing with the crisis, and that's what catapults him into the presidency. When he runs, Hoover has to defend he had not done what he should."

Kearns Goodwin explained that the collective action, where people came together for the central goal of saving the country in a time of crisis, was the key to dealing with the crisis, "much less a triple crises."

"President Trump had thought he had the power to decide when economies could open again, and he made this comment saying, 'This will be the hardest decision I've ever made. I hope to God I get it right,'" she recalled. "It went to the governors, but instead of supporting the governors in a national strategy where we wear masks and social distancing to come out of this together, it became a decisive issue."

Hunt asked Kearns Goodwin if she thinks Trump is capable of learning from the mistakes of the first six months and applying them to a strategy that could help save the economy and lives along with it.

"Well, I mean, we keep waiting for that to happen, but I think the qualities necessary are threefold," Kearns Goodwin explained. "One, you need humility. You have to acknowledge that you don't know everything and you'll make mistakes, and you have to acknowledge mistakes. People go with you when you do that."

She recalled that when former President John F. Kennedy admitted he made a mistake with the Bay of Pigs, support for him went up.

"People are suffering and feel pain," she continued. "They need the leader to somehow absorb that pain. And maybe most importantly, the ambition for self, which may propel a lots of people into leadership at the beginning. [It] has to become something larger -- an ambition for the good of all for the country."

She noted that former President Abraham Lincoln was told ahead of the 1864 reelection that he would never win because he needed to call a peace conference together just on the basis of restoring the Union not Emancipation because that is what's prolonging the war.

"He said, 'I want to win that election to be reassured that what I've done so far is in the minds of the people,'" she quoted. "But, he said, 'I would be dammed in Hell in eternity if I were to return Black warriors to slavery.' So, they thought he would never win. As it turns out, the Battle of Atlanta happened, and the mood of the North changed, but he won the twin goals of emancipation and union intact. But that's the moment when you have to be willing to realize that your election has to be tied to the good of the country, or it's going to make everything worse."

Trump never admits when he's wrong, nor has he been able to empathize with those suffering amid the economic problems, COVID-19 pandemic and battle for true equality.

See the fascinating discussion below:

The FBI is showing no signs of slowing down in its pursuit of those involved in the Capitol riot earlier this month. From lawmakers to militia members to right-wing activists, those recently arrested run the gamut, but many have ties to both law enforcement and the military.

Last week, the FBI reported that it has received over 200,000 digital tips from the public, many of which have been provided by friends, family, relatives, and coworkers of those involved. More than 200 cases have been opened and over 100 people have been apprehended in connection with the riot.