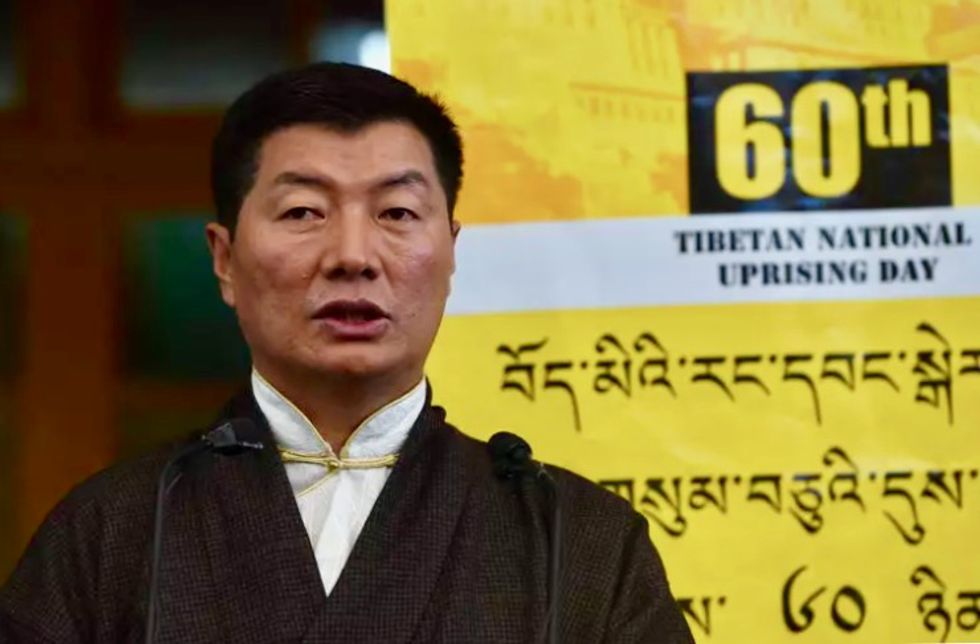 The leader of the Tibetan government in exile, Lobsang Sangay, addresses a gathering at the Dalai Lama's temple during the 60th anniversary of the Tibetan Uprising Day that commemorates the 1959 Tibetan uprising, in McLeod Ganj on March 10, 2019 Money SHARMA AFP

Hong Kong is heading toward the same fate as Tibet after China imposed a new security law that criminalises calls for independence, the leader of the exiled Tibetan government has told AFP.

Lobsang Sangay said China was deceiving Hong Kong the same way it cheated Tibetan people in 1951 when it promised autonomy.

Sangay said China promised to uphold the will of the Tibetan people under a 17-point agreement signed seven decades ago but instead unleashed an oppressive rule, undermining the former Himalayan kingdom's freedoms.

"If you follow the Chinese occupation of Tibet and (events) thereafter you see it is being replicated in Hong Kong," the 51-year-old told AFP from Dharamsala, India where the exiled government is based and Tibetan spiritual leader the Dalai Lama has his home.

"One country, two systems was promised to Tibet....But right after signature of Tibetan officials, under duress, each of the provisions of the 17-point agreement was violated.

The Harvard-educated leader also criticized the security law which China enacted last week for the semi-autonomous city of around 7.5 million people.

The legislation, which has faced international criticism, criminalizes dissenting opinions such as calls for independence or autonomy.

"People in Hong Kong are pursuing what is rightfully theirs -- basic human rights and democracy," he said.

"What you see (in Hong Kong) already took place in Tibet. We have been victims of a national security law. Unfortunately, it is being introduced and implemented in Hong Kong."

Sangay, whose government-in-exile in the Indian Himalayas is fiercely opposed by China, also warned India not to trust Beijing's claims on the long-standing border dispute.

India and China have been locked in their worst border standoff in decades. Twenty Indian troops were killed in a hand-to-hand battle with Chinese forces dying in the Ladakh region last month.

Following diplomatic and military talks, India on Monday claimed Chinese troops were taking down tents and other infrastructure from along the contested border.

The border dispute between the nuclear-armed neighbors has raged for more than six decades. The two sides fought a frontier war in 1962 and there have been frequent clashes since.

"The expansionist drive (of China) that we have been seeing for centuries is what we witnessed at the border of India and China in Galwan," Sangay said.

"We don't want war. We want peace in the region. But I think China wants to be the number one in the world and number one definitely in Asia with no or a distant number two."

Sangay said he supported an Indian government ban on Chinese apps including WeChat, which is widely used by Tibetans around the world to communicate with families back home. China has banned all other platforms.

"For the last six or seven years I have been discouraging people from using WeChat primarily because of security concerns. It is compromised. They can listen to it and your relatives can get into trouble.

"I am sure Tibetans will find other alternatives to communicate with relatives back home," said the Tibetan leader.