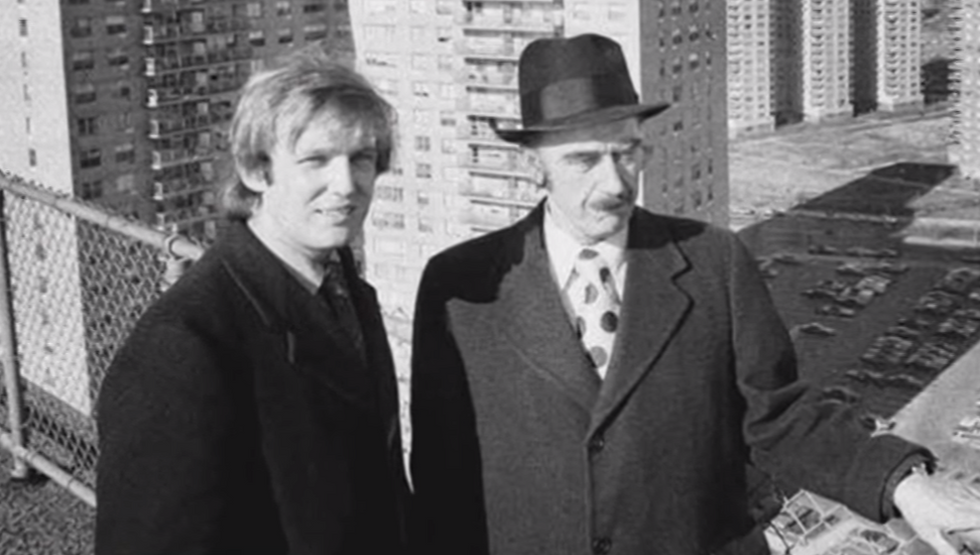 In a new book, Mary Trump — the president’s niece — describes Donald Trump as a “sociopath” who grew up in a dysfunctional family that fostered his greed and cruelty. Donald Trump’s younger brother, Robert, is seeking to block the sale of the book on the grounds that it violates a confidentiality agreement, but publisher Simon & Schuster says 600,000 copies of the book have already been distributed ahead of its July 14 publishing date. Investigative journalist David Cay Johnston, who has reported on Trump for three decades, says the book is “very, very important” and helps to answer how Trump got to the White House.

AMY GOODMAN: So, let’s talk about that. Let’s talk about Donald Trump’s niece, Mary Trump, a clinical psychologist, and her new book, Too Much and Never Enough: How My Family Created the World’s Most Dangerous Man. Mary Trump’s father was Fred Trump Jr. He was Donald Trump’s older brother. Fred Jr. died of a heart attack in 1981 after a struggle with alcohol and addiction.

Mary Trump wrote that after Donald Trump’s inauguration, quote, “the smallest thing — seeing Donald’s face or hearing my own name, both of which happened dozens of times a day — took me back to the time when my father had withered and died beneath the cruelty and contempt of my grandfather. I had lost him when he was only 42 and I was 16. The horror of Donald’s cruelty was being magnified by the fact that his acts were now official U.S. policy, affecting millions of people,” she wrote.

Donald Trump’s younger brother, Robert, is seeking to block the sale of the book, saying it violates a confidentially agreement. However, the publisher, Simon & Schuster, told a court Thursday that 600,000 copies of the book have already been distributed, ahead of its July 14th publishing date. A court ruling is expected any day now. And though the book is out, Mary Trump has been enjoined from speaking.

So, talk about, since you’ve written two books on Donald Trump and written about some of what she writes about in this book, the significance of this book.

DAVID CAY JOHNSTON: Well, we’ve broadly known that the house Donald Trump grew up in was a house of absolute horrors. His father was a monster. He was a very, very competent businessman, but he was corrupt. His business partner was a front for the Genovese and Gambino crime families.

But what Mary brings to this book is an insider’s knowledge, combined with her Ph.D. in clinical psychology. So she’s able to tell anecdotes we have never heard before. There’s lots of new information like that. She’s able to connect the nature of this house and what went on.

I mean, on the night that her father had his heart attack and was taken from the Trump father, Fred Trump, and Mary Trump’s mansion to the hospital, the parents just sat in the living room and did nothing. And Donald and his sister Elizabeth went to the movies. What kind of people do that? This is not a house of love. This is a house of lucre, where the only thing that matters and the only measurement was: How much money did you bring in today? Who did you cheat today? It didn’t matter if you lie, cheat and steal, so long as you got the money. That made you a winner.

And Donald Trump, recognizing that his older brother was not built to deal with dad — he withered under his father, he tried to escape him, he was a pilot for TWA airlines for a period of time — saw opportunity. And he then shaped himself to be what his father wanted, to be the magnification of his father. And, in fact, many of Donald Trump’s stunts, I’ve written about in the past, as have others, actually began with Fred Trump. He just was not as widely known outside of the outer boroughs of New York.

I think this is a very, very important book. It’s not terribly long. It’s crisply written. And I encourage everybody to read this book. I think it will open people’s eyes to how did this sociopath get to the White House.

AMY GOODMAN: And that’s certainly what the psychologist, his niece, calls him, a “sociopath.” Finally, Mary Trump alleges that President Trump, Donald Trump, paid a friend to take his SATs.

DAVID CAY JOHNSTON: Well, at the time that you and I would have taken our SATs, it was easy to hire someone to cheat for you. Today they have photo IDs and proctors, and they check all these things. But, I mean, it was not unheard of during the ’60s for rich boys to hire other — or maybe rich girls — to hire other people to take their tests. And, of course, we had colleges all over the place that were accepting students who were not qualified, and helping them evade the draft, which meant that poor boys, often Black and Brown poor boys, went off to die in Vietnam. Well, Donald Trump has famously said, you know, he was dodging venereal disease in Manhattan with all the women he was chasing, and that was his Vietnam.

AMY GOODMAN: David Cay Johnston, I want to thank you very much for being with us, and we’ll continue to cover these stories, Pulitzer Prize-winning investigative reporter, previously with The New York Times, now with DCReport.org. He has written two books on Donald Trump.