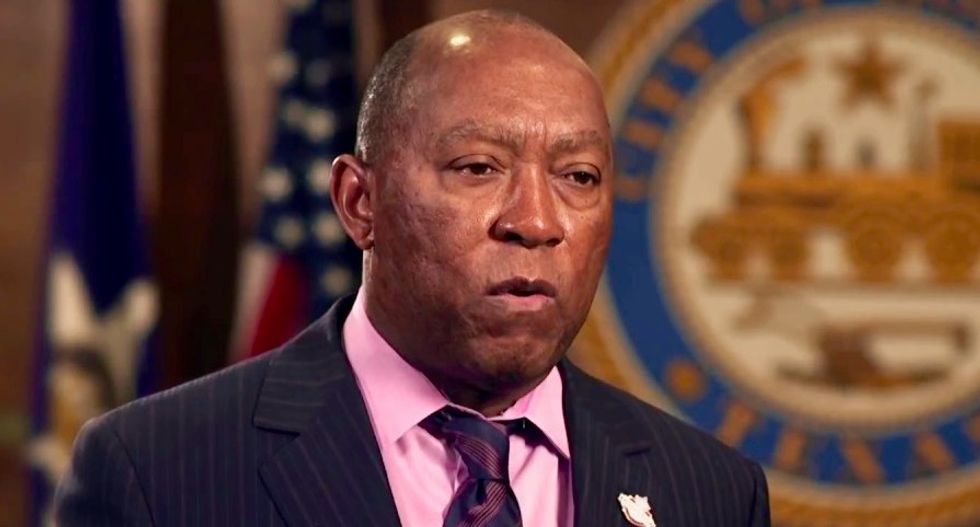 The news came after Turner directed the city's legal department to work with the Houston First Corp., which operates the George R. Brown Convention Center, to review the contract with the state party.

Turner said officials with Houston First sent a letter this afternoon to the State Republican Executive Committee, the state party's governing board, canceling the gathering, which was set to happen July 16-18 and was expected to draw roughly 6,000 attendees.

"These are some very serious times," Turner said at a news conference. "Simply, the public health concerns outweighed anything else."

State party Chair James Dickey said later Wednesday that the party's legal team was reviewing Houston First's letter and would have an update as soon as tomorrow.

"We will pursue all legal options possible against the city of Houston and Houston First to handle this disruption of our convention process and deal with its ramifications and impact on you, our delegates, and with our contracts with vendors, hotels and sponsors," Dickey said during a virtual meeting.

Dickey also said that the SREC had already made clear that the party's desire was to move forward with an in-person convention — but reminded that members on that committee approved a contingency plan earlier this week to move the event online if needed.

Turner cited a section of the contract that stated either party could terminate the agreement or suspend obligations if an occurrence "is beyond the reasonable control of the party whose performance is affected," thanks to a force majeure clause. That clause, the mayor said, included the definition of "epidemics in the City of Houston" as well as emergency government declarations.

Harris County, home to Houston, continues to be the state's biggest hot spot for the new coronavirus. Still, party leaders had resisted the growing number of calls in recent days to cancel the convention, instead making modifications to the event in an effort to make it safer.

Earlier this week, Turner warned that health inspectors would have the authority to shut down the convention if certain guidelines were not followed. Party officials had reiterated that the convention would still happen after the State Republican Executive Committee voted overwhelmingly last week to proceed with the event, and they announced Tuesday that elected officials would move their in-person speeches to videos for attendees to watch at the gathering.

Before Turner's announcement Wednesday afternoon, Dickey criticized Turner for "seeking to deny a political Party's critical electoral function" after the mayor recently allowed protesters to demonstrate there "without any of the safety precautions and measures we have taken."

Dickey also said the party's legal team was assessing the city's ability to cancel the convention and weighing its legal options.

"We are prepared to take all necessary steps to proceed in the peaceable exercise of our constitutionally protected rights," Dickey said in a statement.

Turner, asked why he waited to push for the convention's cancellation until the week before the event was scheduled to happen, said there was hesitation that such a move could appear political.

"This is a political convention," he said, "and the last thing you want to do in the midst of a pandemic is to politicize it or make it seem like you are going out of your way to close the door."

Paul Simpson, the chair of the Harris County GOP, called Turner's announcement a "hypocritical flip flop on public gatherings" and "a political stunt."

"While he joined in massive marches in the streets last month, he has now blocked Republican grassroots activists from peaceably assembling even under the most strongest health safeguards," Simpson said. "The Mayor should not abuse power for political ends."

At the news conference, Turner defended the recent protests against police brutality that happened across the state and nation, saying it is "a different thing when you're talking about an indoor convention and people are in close proximity."

At least one Republican official praised the cancellation.

Ahead of Wednesday's cancellation, party officials had said thermal scans would be used, entry points would be limited and hand sanitizing stations would be placed throughout the center. Masks would have also been required under Gov. Greg Abbott's recent statewide mask mandate.

Still, some hospitality workers who were expecting to be asked to staff the upcoming convention said they were worried about working such a large in-person gathering.

“I am afraid to return due to the pandemic crisis,” said Gracie Akram, a 66-year-old housekeeper at the George R. Brown Convention Center. “The fact that we have to have direct contact with those clients, we don't see where or how we can social distance from them. It’s almost utterly impossible. So it's a very extremely frightening situation.”

Akram is a member of the Service Employees International Union's Texas chapter, which represents more than 100 employees subcontracted at Houston First. That group sent the convention center operator a letter Wednesday asking that the event be canceled.

“This event will directly place those asked to work in harm's way, exposing workers to dangerous working conditions, and increasing their chances of contracting the diseases and potentially infecting their families and communities,” Gina Revelo, SEIU Texas' property services director, wrote in the letter.

Already one elected official has offered to host the convention, saying his county has the space to hold the in-person event.

"We have the ability to host this convention for the Republican Party," Montgomery County Judge Mark Keough said in a video posted to Facebook. "Whatever we need to do, we will be great hosts. We will not put any political pressure on you. ... Montgomery County is open for business."

Meanwhile, the Texas Democratic Party applauded Turner's announcement Wednesday, saying the mayor and other city officials made "the safe, sensible decision" to cancel the event.

"Going through with this in-person convention would have been catastrophic and led to even more cases and deaths," party Chair Gilberto Hinojosa said in a statement.