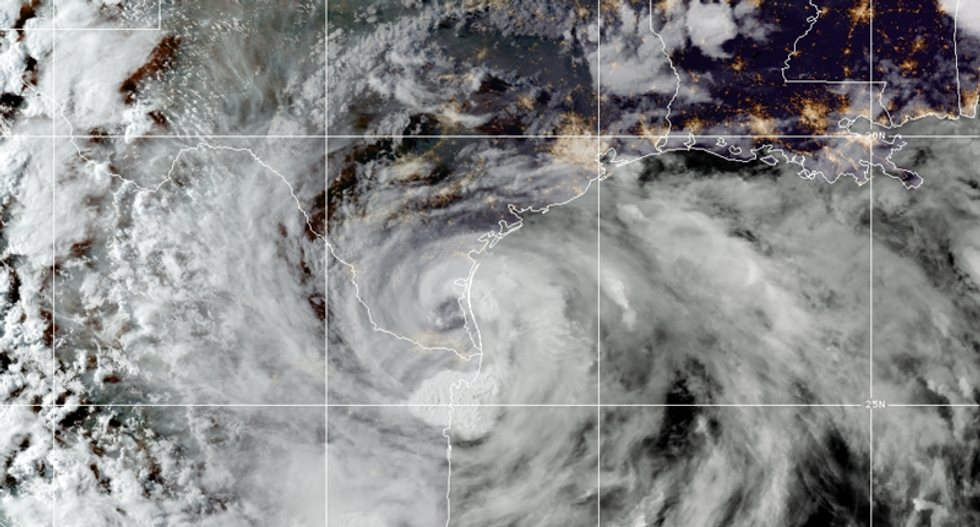 Photo of Hurricane Hanna via the National Hurricane Center.

The Category 1 storm packed winds of around 90 miles (145 kilometers) per hour as it came ashore at Padre Island at 5 pm (2200 GMT), the US National Hurricane Center said.

"Hanna is expected to produce heavy rains across portions of southern Texas and northeastern Mexico. These rains will result in life-threatening flash flooding," and some river flooding, the meteorologists said.

"Life-threatening storm surge" could potentially reach 6 feet (1.8 meters) in some areas, while the hurricane was forecast to drop up to 18 inches (45 centimeters) of rain through Monday on south Texas and the Mexican states of Coahuila, Nuevo Leon, and northern Tamaulipas.

"My Administration is closely monitoring Hurricane Douglas off Hawaii & Hurricane Hanna, which has now made landfall in Texas," President Donald Trump tweeted.

"We continue to coordinate closely with both states -- listen to your emergency management officials ... to protect your family & property!"

Damage appeared to be limited in the immediate aftermath of Hanna's landfall, with some isolated flooding and power outages.

Hanna roared ashore as Texas is facing a huge surge in coronavirus infections, with officials instituting a state-wide mask mandate to try to curb the spread of the disease.

Hanna was about 70 miles south of Corpus Christi when it made landfall, with the city of 325,000 home to one of Texas's virus hotspots.

The US is the hardest-hit country in the coronavirus pandemic, with some 4.2 million cases, and authorities will have to figure out how to safely shelter residents forced out of their homes by future hurricanes this season.

Hanna was forecast to move inland over south Texas on Saturday night, and into northeastern Mexico on Sunday.

Two other storm systems were churning Saturday: Pacific Hurricane Douglas, bearing down on the Hawaiian islands, and Tropical Storm Gonzalo in the Atlantic, near the Windward Islands.

Douglas -- at one point a powerful Category 4 hurricane -- has weakened to a Category 1 storm with wind speeds of 90 miles per hour.

The NHC said Saturday the storm "will be near the main Hawaiian Islands late tonight and will move over parts of the state Sunday and Monday," bringing high winds, heavy surf, and rainfall of up to 10 inches.

A hurricane warning was in effect in Oahu.

Big waves have already started to pound the coast in eastern Venezuela and power was knocked out in some areas Saturday, Venezuelan media reported.