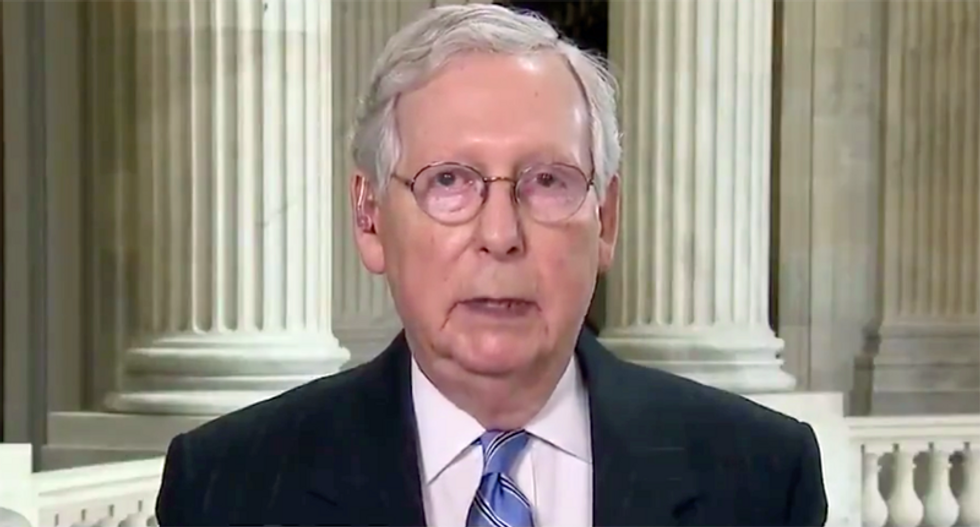 "Tens of millions of Americans on the brink of eviction and food insecurity and the Senate just left for yet another 3-day weekend."

The Republican-controlled U.S. Senate has adjourned for a three-day weekend as enhanced unemployment payments are officially set to lapse on Friday, guaranteeing that tens of millions of Americans will see their incomes drop by 50-75% with another rent payment due in 24 hours.

The Senate's departure followed a long day of jockeying and blame-hurling on the floor Thursday that ultimately failed to produce a solution for the nearly 30 million Americans who for months have relied on the $600-per-week unemployment insurance (UI) boost to meet basic needs as the economy remains in deep recession.

"Mitch McConnell's failure to act already sealed this lapse, and half-measures and gimmicks from the White House cannot undo it."

The chamber is not set to reconvene until 3 pm Monday.

"Just so we're all clear," tweeted economist Robert Reich, "more than 25,000,000 unemployed Americans are about to lose their extra unemployment benefits, and the Senate just left for a three-day weekend. Republicans have lost the right to govern."

On Thursday afternoon, Sen. Ron Johnson (R-Wis.) attempted to pass by unanimous consent legislation that would give states an option to either pay out a federally funded $200-per-week UI boost or implement a formula that would replace two-thirds of a laid-off worker's previous wages. Sen. Ron Wyden (D-Ore.) called Johnson's proposal "so heartless even Cruella de Vil wouldn't endorse it."

Senate Minority Leader Chuck Schumer (D-N.Y.) blocked passage of Johnson's legislation—which would have amounted to a $1,600-per-month drop in benefits for millions of Americans—and subsequently attempted to pass the HEROES Act, a sprawling legislative package approved by the Democrat-controlled House in May that would extend the weekly $600 UI boost through January of next year. Johnson blocked the bill.

Later, Sen. Martha McSally (R-Ariz.) tried to pass a one-week extension of the $600 boost but Schumer objected, dismissing the effort as "clearly a stunt." The Washington Post's Jeff Stein noted on Twitter that it likely would have taken around two weeks for the one-week extension payment to actually reach people.

"State offices will need weeks to reprogram their systems to account for an extension of the $600 weekly federal payments that expire on Saturday—or any changes that Congress makes to the benefit amount or eligibility rules," Politico reported. "That comes on top of hardships faced by workers in states like Washington and Nevada, who are already waiting months to get their first payments in the middle of the coronavirus pandemic because their unemployment offices can't handle the historic flood of claims."

"Mitch McConnell's failure to act already sealed this lapse," said Beyer, and half-measures and gimmicks from the White House cannot undo it."

Ryan Thomas, national press secretary for advocacy group Stand Up America, tweeted that "Mitch McConnell is holding our economy and our democracy hostage" by skipping town without passage of Covid-19 relief.

Tens of millions of Americans on the brink of eviction and food insecurity and the Senate just left for yet another… https://t.co/VRZrOK8MEm
— Town Hall Project (@Town Hall Project) 1596146334.0

"We had a long discussion and we just don't think they understand the gravity of the problem," Schumer said at a press briefing following the meeting. "The bottom line is this is the most serious health problem and economic problem we've had in a very—in a century and in 75 years. And it takes really good, strong, bold action. And they don't quite get that."

The Senate's failure to secure an extension of the UI boost came on the same day the Commerce Department reported that the U.S. economy contracted at a record-shattering 32.9% rate last quarter. The Labor Department also reported Thursday that 1.43 million people filed jobless claims last week.

Heidi Shierholz, senior economist and director of policy at the Economic Policy Institute,  noted in a blog post that "last week was the 19th week in a row that unemployment claims have been more than twice the worst week of the Great Recession."

"Republicans in the Senate just allowed the across-the-board $600 increase in weekly UI benefits to expire," Shierholz wrote. "They are proposing to (essentially) replace it with a $200 weekly payment. That $400 cut in benefits is not just cruel, it's terrible economics. These benefits are supporting a huge amount of spending by people who would otherwise have to cut back dramatically. The spending made possible by the $400 that the Senate wants to cut is supporting 3.4 million jobs."