'It's real': Trump campaign's new T-shirt insignia looks a lot like a Nazi symbol — and people are noticing 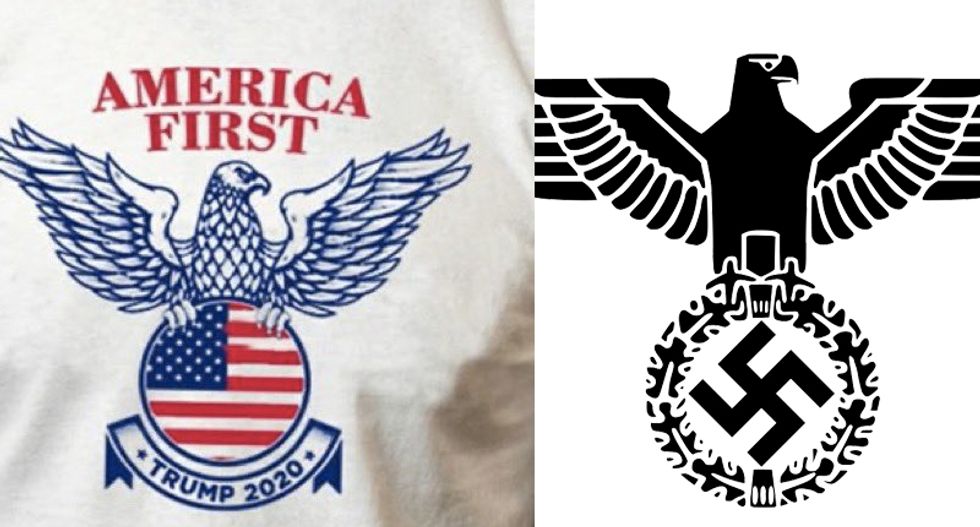 While eagles have been used since the Roman Empire to signify power, the only eagles clutching a shield in their feet appear on Nazi memorabilia and Trump's campaign shirt.

It's a fact that didn't go unnoticed by those on Twitter, Wednesday. Specifically, the Republican-run Lincoln Project posted the images together, saying, "Come on."

One person tried to claim that it was similar to the American symbol, which was specifically designed with plenty of symbolism in mind. In the left foot, the eagle is gently holding an olive branch, symbolizing peace. In its right foot are 13 arrows, with the claws out, to symbolize strength. In its mouth, the eagle is holding a banner with E Pluribus Unum (out of many, one).

@ProjectLincoln Who had American fashion inspired by Nazi imagery and promoted by Trump on their Trumptopia 2020 Bingo card?
— ★彡BreitERbart ★彡 (@★彡BreitERbart ★彡) 1593649717.0

@ProjectLincoln Is there a chance that trump is sabotaging his re-election chances on purpose, or is he really so i… https://t.co/P7KJvQHyUq
— Gamora 🇺🇲 (@Gamora 🇺🇲) 1593652546.0

I don’t think Trump is knowledgeable enough to do a nazi secret handshake, but I think his graphic designers know t… https://t.co/Gd9mmzKmEz
— Gabe Hardman (@Gabe Hardman) 1593652724.0