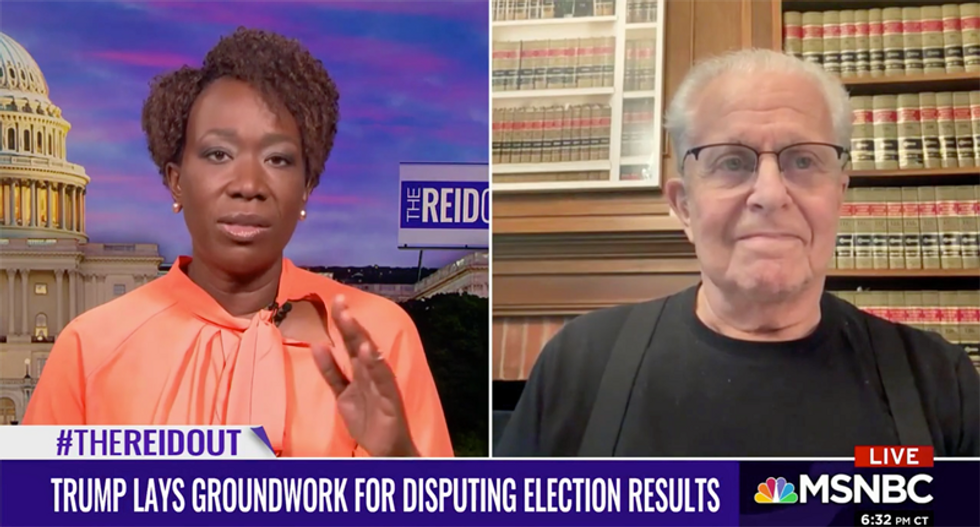 Constitutional law expert Laurence Tribe was interviewed on Friday by MSNBC's Joy Reid on "The ReidOut."

Tribe, who has taught at Harvard Law for fifty years and argued dozens of cases before the U.S. Supreme Court offered an intriguing theory Reid suggested had cheered up many of her viewers.

Reid asked Tribe about President Donald Trump talking about trying to delay the November election as he trails former Vice President Joe Biden in the polls.

"They're trying to make it look chaotic but there's a fail-safe mechanism built into the constitution itself," Tribe said. "No matter how much dust he throws into the gears, at high noon on January 20th, 2021, if there has not been a new president elected, at that point, Nancy Pelosi, Speaker of the House becomes president of the United States."

Tribe explained that "all of the enablers at that point would risk committing federal felonies if they were to exercise power, which they no longer have, because Trump would no longer be president."

"There's every reason to believe that the new Congress is going to be in Democratic hands. So I wouldn't, at this point, play Trump's game of throwing up our hands and saying 'there will be no winner, Trump is going to win by default.' He can't really do it," Tribe noted. "The default solution in our system is President Nancy Pelosi -- and I can think of worse things than that."