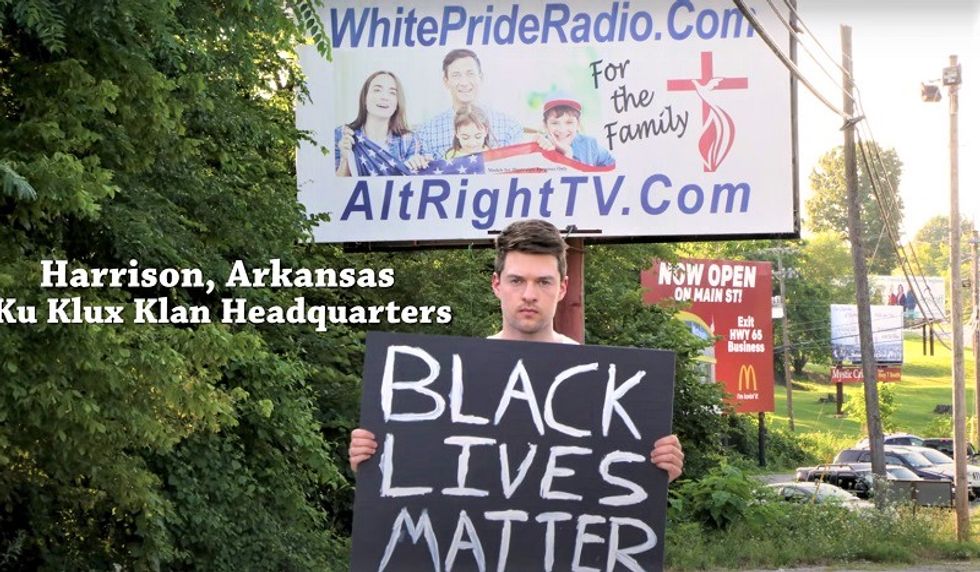 A man holding a "Black Lives Matter" sign in a notorious white supremacist stronghold filmed himself getting pelted with nonstop threats and abuse for hours by passersby.

In the video, the man stands on the side of the road in Harrison, Arkansas, which has earned a reputation as a haven for white nationalist activity over the years.

Many drivers in the town who pass him by give him the middle finger, while others yell racist abuse at him.

"White pride world wide!" one driver yells at him.

"In about ten minutes, I'm going to be back and you'd better be f*cking gone!" another driver threatens him.

"What about white lives?" one woman asks angrily. "We matter too!"

"Explain to me why a coon's life matters," shouts a man from his car.

"Get your ass out of town, that sh*t don't mean sh*t here!" threatens another.

"I'd be ashamed to be a white boy carrying that stupid sign," a driver informs him.

Even though most of the video is grim, it ends on a hopeful note as a young woman wearing a face mask approaches the man and gives him a note that reads, "Ignore the haters, you're being peaceful. What you're doing is good -- just a friendly reminder don't give up hope."