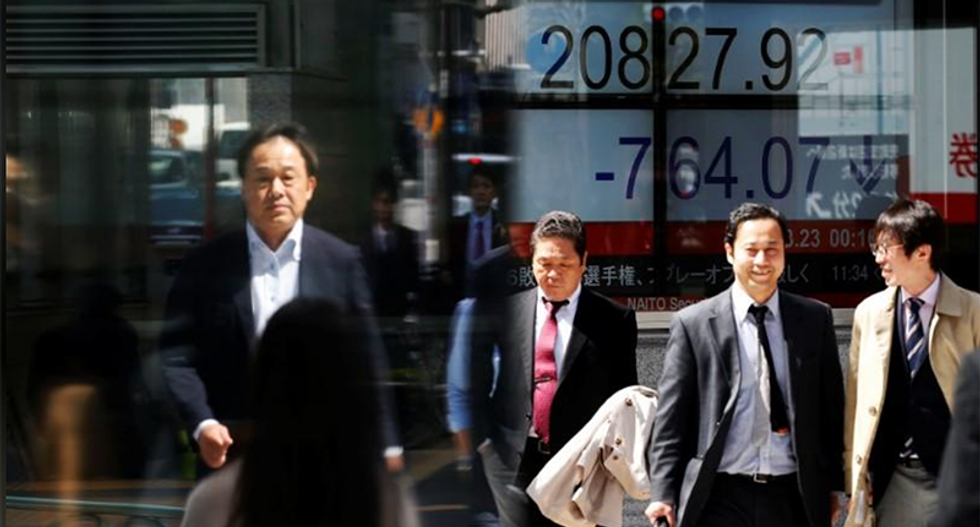 Asian markets mostly fell Tuesday as traders took a step back after their latest rally, with a run of upbeat economic data offset by fears over a spike in new virus infections.

While several countries are suffering a fresh surge in infections -- particularly the United States -- the ongoing easing of lockdown measures and reopening of economies has been the key driver of a months-long surge across equities.

After the latest advances, which saw Shanghai hit a two-year high and the Nasdaq on Wall Street end at another record, dealers stepped back and took profits.

There was also some trepidation on trading floors after Donald Trump's top infectious diseases expert warned the US was still "knee-deep" in its first wave of coronavirus infections.

Anthony Fauci said the country was in "a serious situation that we have to address immediately".

That came as several states reported new daily records for new cases, with some reimposing lockdowns.

On Tuesday, Australian authorities said more than five million residents of Melbourne, the country's second-biggest city, will be locked down for six weeks after virus cases surged.

Sydney, Mumbai and Jakarta were flat, while London, Paris and Frankfurt opened with losses.

But Shanghai rose 0.4 percent, having surged almost six percent Monday as retail investors piled back into the market.

Observers also pointed to an editorial in the China Securities Times on Monday that said fostering a "bull market" after the virus crisis was crucial to kick-starting the world's number two economy.

The composite index has risen more than 10 percent in just over a week, though there are worries about another bubble similar to the one that burst four years ago and sparked a global rout.

"Instead, they are listening to the enthusiastic chorus from the nation's influential state media, which are universally singing bullish from the same song page."

He cited reports saying there had been a recent surge in new brokerage account openings.

Traders have for weeks been trying to balance the reopening of economies with worries about the disease as it continues its march across the planet.

On Monday there was more positive data, with an index of the US service sector -- which makes up the vast majority of the economy -- seeing its biggest-ever jump in June to beat forecasts.

"Investors have recognised that as bad as the economy in the US is, it's not as bad as what people thought it would look like in March and April," said Nancy Prial at Essex Investment Management.

"The market has started to sense we might see better-than-anticipated results fairly broadly across a wide spread of companies."

In a sign that the reporting season could be positive, Samsung Electronics said Tuesday it expects to see operating profit jump 23 percent in the second quarter, which is much better than the single-digit fall that analysts had forecast.

The firm appears to have benefited as lockdowns boosted its chip business with data centres moving to stockpile DRAM chips to meet surging demand for online activities.