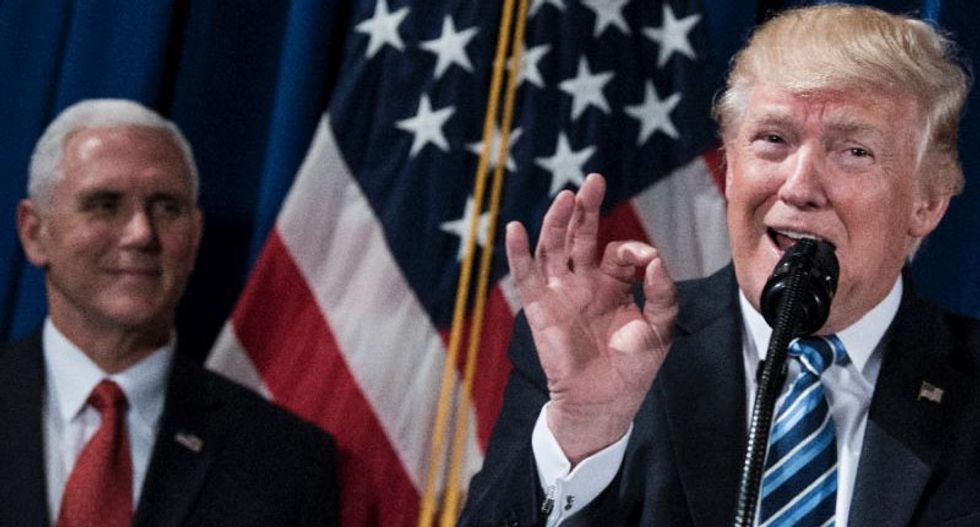 US President Donald Trump will become the first sitting president to address the National Rifle Association since Ronald Reagan nearly 35 years ago (AFP Photo/Brendan Smialowski)
Donald Trump is a malignant narcissist with antisocial proclivities and a core sadism. It is this combination of psychopathology that leads him to be intensely attracted to the powers of a dictator. Indeed, Trump has proven repeatedly that he wants America to be an autocracy, not a democracy. He has systemically and purposefully guided our country toward dictatorial rule during the past four years. He has frequently embraced, admired, complimented, envied and even fawned over autocratic leaders throughout the world.

Donald Trump in a second term would be unstoppable. And America might be changed forever.

Trump seeks complete power and control. According to him, the president has absolute, all-encompassing authority. As such, Trump does not abide by norms or rules. He breaks laws with impunity. He interferes with all attempts at oversight and accountability. He believes that he is free to exert his power as he sees fit, no matter the motivation or legality or well-being of anyone other than Donald Trump.

Despite taking the presidential oath, Trump exhibits no intention to uphold or defend our Constitution. He does not recognize that the three branches of government are co-equal. He has demonstrated his belief that the executive branch holds all power. Look at how he has politicized the Department of Justice; he has been able to get investigations of himself and his cronies stopped. Branches of government in a dictatorship exist solely for the benefit and pleasure of the leader. Trump treats our judicial branch as an extension of himself, and as a vehicle for obtaining power and hiding his corruption.

Trump does not believe in the value of the free press because its function is antithetical to his needs and wishes. His constant proclamation of "fake news" is his way of trying to undermine and even destroy the credibility of the free press. Trump asserts that he has the right to jail journalists. He tries to portray journalists as "the enemy of the people," even though their role is to serve as a watchdog of government and to inform the citizenry. In a similar vein, Trump believes he has the right to jail political rivals. He sees them as his mortal "enemies" because they have the audacity to compete against him or to speak out in opposition. He seeks to exact sadistic vengeance on his political rivals in order to destroy them and to enhance his power.

For Trump, gaslighting the American public is real, while facts and information are "fake." Reality for Trump is not defined by data or rationality but by his own needs and wants. To reach his goal of control and power, Trump is more than comfortable with his lies, misinformation, conspiracy theories, magical thinking, scapegoating, denials and rambling blather.

Trump has just begun a strategy of provoking peaceful protesters so that he can exert his absolute and even cruel authority. Trump engages in "stochastic terrorism" by saying just enough to trigger vulnerable people to act out in anger while he maintains a thin veneer of deniability. Now Trump is sending federal troops into American cities to escalate conflicts with protesters in order to demonstrate his raw sadistic strength. While claiming he is our "Law and Order" president, Trump is lawless and shameless himself. That is the twisted irony of a dictator.

Trump shows no empathy for others. He has an unquenchable desire for praise and adulation, but he is incapable of understanding human pain and suffering and plight. All but a very few of his personal alliances are fleeting and transactional. Trump treats others as dupes to be influenced and then dismissed at will when they are no longer of service to him.

Trump's lack of empathy is not just a matter of theory or abstraction. His complete denial and inaction in response to the current deadly pandemic is reflective of his thinly-veiled solipsism and sadism. He has been an active accomplice to the mass murder of more than 150,000 Americans, with the numbers growing every day, and it is but a minor inconvenience to him if it serves his personal or political goals. Sadly, American deaths are palatable to him if they somehow set the stage for his re-election.

Trump's authoritarianism explains his attraction to other authoritarian leaders around the world, especially Vladimir Putin. His admiration of Putin is openly expressed. He is envious of Putin's strength and boldness and lack of conscience. He wants to be like Putin; he wants absolute power and he wants to be adored but feared by the people. Yet paradoxically, Trump is so in awe of Putin and other autocrats, that he presents himself as subservient and inept, as he did in Helsinki and North Korea.

Trump's mode of governing has been to stoke division, confusion and chaos. An America in crisis is exactly what Trump desires since it then becomes easier for him to exert control and power, to profit from corruption, and to wreak vengeance on his foes.

Trump views the presidency as a way of marketing his brand and of skimming profits. Making money, for him, is an end in itself. Trump has not abided by the emoluments clause of the Constitution. His golf properties and Washington hotel have made huge profits off the public payroll and from foreign dignitaries. Trump's claim that he has lost money by assuming the presidency is a lie and part of his scam. Even money from his Inaugural fund in 2016 has been skimmed off by family members.

Finally, Trump is anti-science and anti-intellectualism in his approach to governance. Why? Because he believes that his ideas, his notions, his hunches and his narratives are far superior to data and knowledge. In other words, he does not want facts and information to interfere with his wishes and desires, either personal and political. Trump does not care if you believe the world is flat if it embellishes him or profits him.

If re-elected, Trump will feel empowered and emboldened to march the country toward dictatorial rule. If Republicans continue in their complicity, Trump's dictatorial strivings will not be stopped. And, sadly, Trump's Attorney General, William Barr, will clear the path for him in his quest for an authoritarian presidency.

Trump is unfit to be president. He represents a clear and present danger to our democratic way of life. The psychopathology that underlies and fuels his wish to be an authoritarian dictator is severely malignant.

Will a new America be transformed in Trump's image? Will the Oval Office become the seat of a dictator?

The election on Nov. 3, 2020, may well determine the future of our democracy for decades or generations to come. Vote like your life depends upon it.