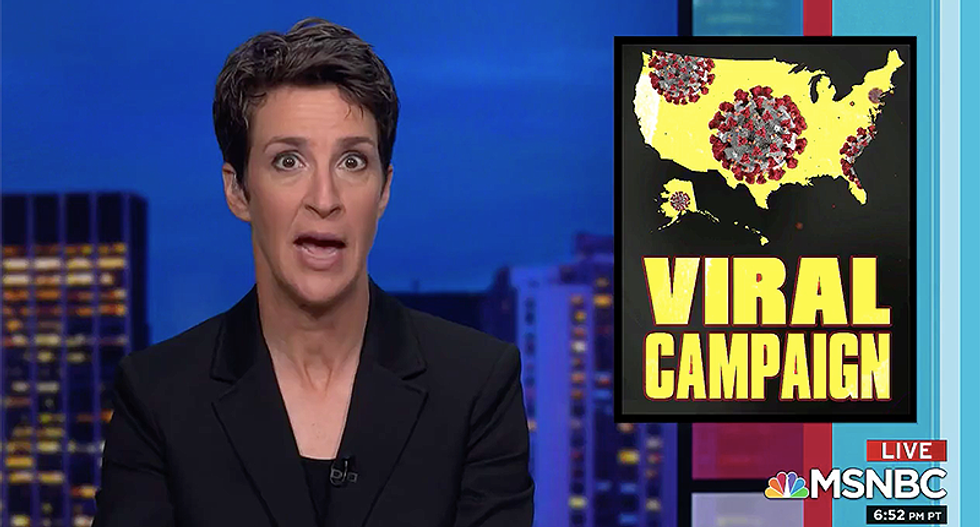 President Donald Trump's COVID-19 Road Show is off to another super-spreading extravaganza this weekend as the campaign heads to New Hampshire.

During her final commentary Thursday, MSNBC's Rachel Maddow recalled that Tulsa, Oklahoma did everything they could to try and keep people safe while waiting for the Trump rally and during the event. The Bank of Oklahoma Center, where the rally was held, purchased stickers that said not to sit on specific seats to keep people physically distant. Trump's team told the BOK Center to remove them.

"It was the most space anywhere in America since the coronavirus crisis began," said Maddow.

Now, the Tulsa County Health Department thinks that the Trump rally was likely the source of the increase in COVID-19 cases in the city.

To make matters worse, it was revealed that eight of President Donald Trump's advance staff contracted COVID-19 while in Tulsa in the lead up to the rally. Six of them were announced ahead of the rally and it was revealed two more had the virus after the fact.

"Herman Cain, yes, that guy, Herman Cain,999, he was actually hospitalized after coming down with coronavirus just days after the president's Tulsa rally -- not wearing a mask," Maddow continued. "Herman Cain is still in the hospital. We wish him the best."

"Fresh off that success in Tulsa, the president, of course, in short order held another indoor event," she went on. "This one for 3,000 people in Phoenix, Arizona. Multiple Secret Service agents assigned to that event tested positive as well. In fact, the virus really tore through the ranks of Secret Service agents working on presidential and vice-presidential events. [Pence] had to postpone his plan to visit the city."

"Why quit while you're ahead?" asked Maddow. "Trump and company then decamped to South Dakota for a no-masks, no-social distancing event at Mount Rushmore. Before the first fireworks went off, we learned that Donald Trump Jr.'s girlfriend had also been diagnosed with the virus. The announcement came just hours after she had held an indoor unmasked fundraiser with South Dakota's Republican governor. South Dakota for that big event. So this is the national roadshow that the president is doing right now. There aren't any other big congregate events indoors for thousands of people of any kind anywhere in the country. It is just events for the president."

Now the Trump campaign is headed to New Hampshire. God be with them.