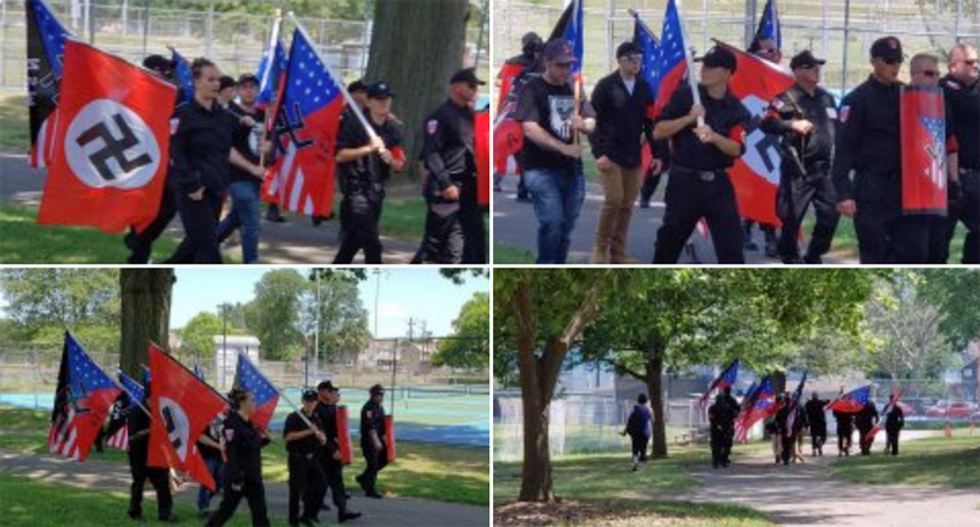 The Pennsylvania town of Williamsport was the scene of a neo-Nazi march on Saturday.

"Despite assurances they would not appear, approximately 15 members of National Socialist Movement (NSM), many of them armed, rallied in Williamsport’s Brandon Park Saturday afternoon," PennLive reports.

The NSM reportedly used the N-word to refer to Derek Slaughter, the town's first Black mayor.

"They made a profanity-laced racial insult at an African-American woman who went by on the street," PennLive reported. "A female member proclaimed 'God hates the gays' and led a chant against them using the 'F' word."

"The group carried NSM flags that were a combination of a swastika and American flag and wore Nazi armbands. A few carried shields and several gave the Nazi salute during the rally and as they were leaving," PennLive reported.

The NSM had sought a permit for the march, but it was denied a permit due to coronavirus regulations, Northcentral PA reports.

Here are some photos of the march:

Nazi rally in Williamsport, PA today. My thoughts: This is the master race? So much Little Dick Energy tho. Their… https://t.co/lt2okyuivv
— Latisha Sweeting (@Latisha Sweeting)1595096356.0