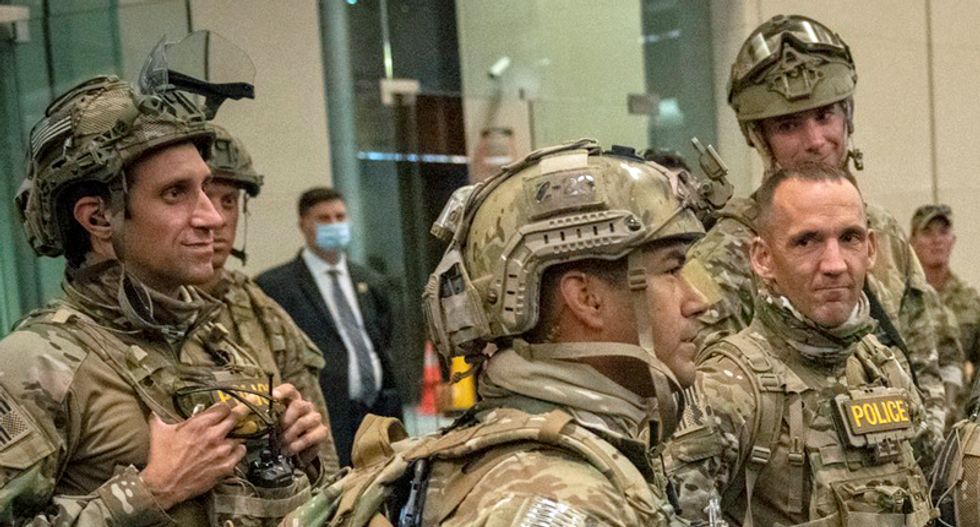 New York would go to court to stop Donald Trump sending federal troops to the city, its mayor said Tuesday, as the US president puts law and order at the forefront of his re-election bid.

On Monday, Trump said they had done "a fantastic job" locking up "anarchists," and he threatened to deploy the military-garbed law enforcement agents to other Democrat-led cities.

He called the move necessary, even claiming Chicago was "worse than Afghanistan," but critics labelled it an election year political stunt.

"This president blusters and bluffs and says he's gonna do things and they never materialize on a regular basis," said New York Mayor Bill de Blasio.

"If he tried to do it, it would only create more problems, it would backfire, wouldn't make us safer and we would immediately take action in court to stop it.

"From my point of view, this would be yet another example of illegal and unconstitutional actions by the President," he told reporters.

Trump's decision to have federal law enforcement agents, some of whom don't wear identification badges, intervene in local protests has sparked anger and legal questions.

Local leaders who are responsible for running local police forces say the deployment has escalated tensions.

Since the DHS force arrived in Portland, video has showed them taking some demonstrators away in unmarked vehicles.

Most of those detained have been freed, but critics -- including Oregon's governor and senators -- likened the federal agents to "secret police" in more repressive societies.

Oregon has sued DHS for rights violations, while the state's governor, Kate Brown, demanded that the officers be withdrawn, calling the deployment a political "photo op."

The White House denies accusations of abuse of power, insisting the agents are needed to protect federal buildings targeted by anti-racism demonstrators.

"If we left tomorrow, they would burn that building down. We have them on video trying it, several times," said Wolf on Tuesday, calling the protesters "violent anarchists," while simultaneously denouncing local officials' inaction.

Since African-American man George Floyd was killed by a Minneapolis police officer on May 25, sparking nationwide protests against police brutality, Trump has sought to paint the demonstrators as radical leftists intent on destroying the country.

Facing an uphill battle for reelection in November against Democrat Joe Biden amid a chaotic response to the coronavirus epidemic, Trump is using the protests -- and upticks in crime following them -- to rally support from his conservative base, Democrats say.

According to reports, the DHS was preparing to send 150 paramilitary personnel to Chicago, which has high levels of violent crime, after police there clashed with demonstrators seeking to tear down a statue of Christopher Columbus.

White House spokeswoman Kayleigh McEnany said no decision had been made but added that the city's Democratic mayor is "clearly unable to control her streets."

Protests in New York, where Trump made his fortune in real estate, have been overwhelmingly peaceful in recent weeks but the city has seen a surge in crime this year, particularly since June.

Shooting incidents are up almost 61 percent in 2020 while murders have increased 23 percent, according to the police's latest statistics.

Senior officers in the NYPD -- America's largest force with 36,000 officers -- attribute the rise to restraints placed on police and rock-bottom morale in the wake of Floyd's killing.

Critics suspect officers may be holding back in protest. Police say they are stretched thin.

A Rochester, N.Y. Fire Department captain has resigned in the wake of allegations that he took three junior firefighters during their shifts to a racist party featuring fried chicken buckets next to Juneteenth posters, among other inappropriate content.