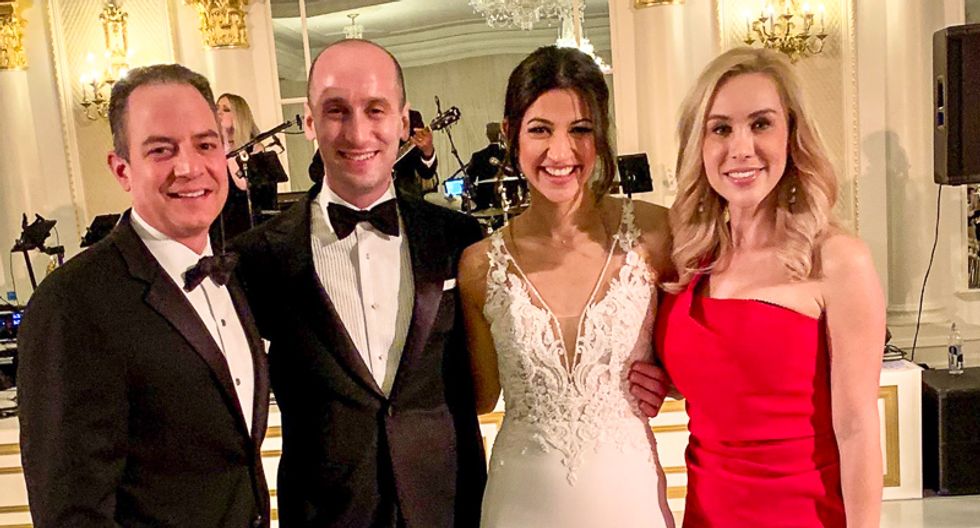 Katie Miller, an aide to Vice President Mike Pence, says she was sent to the border to see family separations in a bid to make her "more compassionate" — but "it didn't work," according to a new book.

Miller, the wife of immigration hardliner Stephen Miller and Pence's press secretary, told MSNBC's Jacob Soboroff that she did not share her colleagues' and friends' concerns about the family separation policy at the border when she worked as a spokeswoman for the Department of Homeland Security.

"'My family and colleagues told me that when I have kids, I will think about the separations differently," she told Soboroff for his new book, "Separated." "I don't think so. DHS sent me to the border to see the separations myself to try to make me more compassionate, but it didn't work."

Soboroff struggled with Miller's response. The excerpt was first reported by MSNBC host Rachel Maddow on her primetime program.

Maddow read, "Jacob responds: 'It didn't work? I will never forget what I saw. Seriously. Are you a white nationalist?' he asked, exasperated."

"'No, but I believe if you come to America, you should assimilate," Miller responded, according to the book. "Why do we need to have 'Little Havana?'"

Thousands of children were separated from their families at the border. Many of the children were held in detention facilities in dangerous conditions. An Associated Press report last year found that children held at a facility in Texas, for example, did not have sufficient access to food, water or hygienic supplies.

The Department of Health and Human Services' Office of Inspector General found that children separated from their families suffered acute psychological trauma.

"According to program directors and mental health clinicians, separated children exhibited more fear, feelings of abandonment and post-traumatic stress than did children who were not separated," the September report said.

Trump caved to pressure and signed an executive order to end the policy in June of 2018, but a report from the Southern Poverty Law Center found that the policy continues to be used.

"The welfare of children in our custody is paramount," Miller told CBS News in 2018. "As we have already said — and the numbers show — separations are rare. While there was a brief increase during zero tolerance as more adults were prosecuted, the numbers have returned to their prior levels."

The separations were not "rare." The Trump administration separated more than 5,000 children from their families at the border.

Miller was appointed as Pence's spokeswoman last year before he took over the White House coronavirus task force in the spring. She tested positive for the coronavirus in May.

She married Stephen Miller, who has repeatedly pushed white nationalist talking points, in February. The couple is now expecting their first child together.