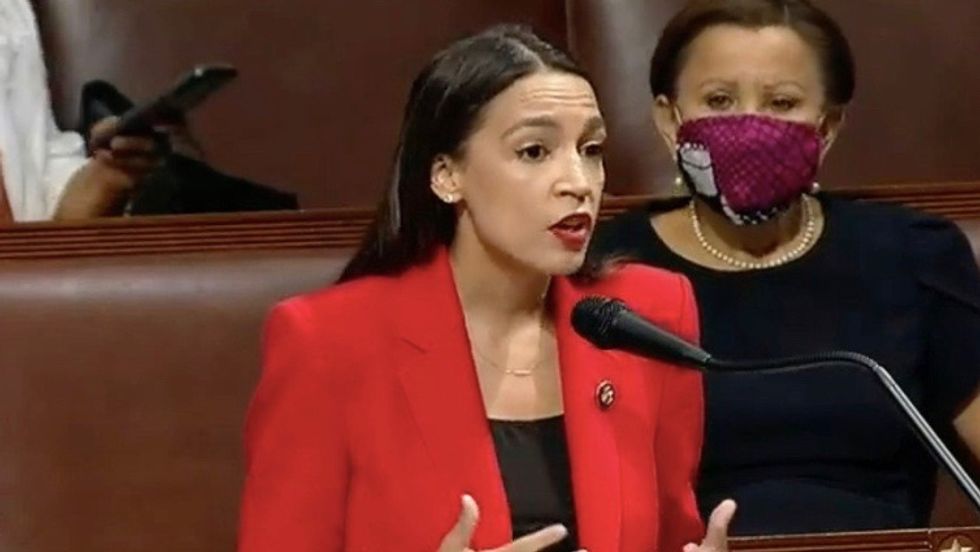 U.S. Congresswoman Alexandria Ocasio-Cortez delivered a powerful and passionate speech exposing and attacking misogyny after being accosted on the steps of the nation's Capitol this week by two Republican Congressmen.

Republican Rep. Ted Yoho of Florida called the Congresswoman from Queens and The Bronx a "fucking bitch," and Republican Rep. Roger Williams of Texas, by Yoho's side, made remarks about urine, according to reports.

Ocasio-Cortez on Thursday, one day after Yoho delivered a very non-apologetic statement on the floor of the House, responded by telling Members the Florida Republican's attack on her was "permission" for other men to attack his own daughters, wife, and other women.

"This harm that Mr. Yoho levied – tried to levy – against me, was not just an incident directed at me. But when you do that to any woman, what Mr. Yoho did was give permission to other men to do that to his daughters," Rep. Ocasio-Cortez explained.

"In using that language, in front of the press, he gave permission to use that language against his wife, his daughters, women in his community. And I am here to stand up, to say that is not acceptable," she continued.

"I do not care what your views are. It does not matter how much I disagree, or how much it incenses me or how much I feel that people are dehumanizing others, I will not do that myself. I will not allow people to change and create hatred in our hearts."

"And so what I believe is that having a daughter does not make a man decent. Having a wife does not make a decent man. Treating people with dignity and respect makes a decent man. And when a decent man messes up, as we all are bound to do, he tries his best and does apologize. Not to save face, not to win a vote. He apologizes, genuinely, to repair and acknowledge the harm done. So that we can all move on."

Right now, @AOC is speaking from the House floor about @RepTedYoho’s comments. “When you do that to any woman, wha… https://t.co/l5stHdrUAS
— Sawyer Hackett (@Sawyer Hackett) 1595515305.0